You are here: Home » Brittany » Gouarec - our base in the heart of Brittany

Gouarec - our base for our cycling holidays in France

The Village of Gouarec - home of Breton Bikes Cycling Holidays 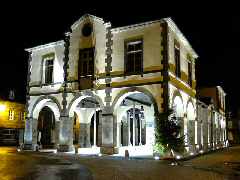 Since we first started Breton Bikes in 1989, this village has been the starting point for all our French cycling tours,  and is just 3 kms from our home. It's also where you'll find our gite and fixed centre camping tours and from 2016 we run the campsite ourselves for Breton Bikes customers and every other visitor to the campsite. Both Fixed centre options offer the wide range of cycling routes some described here. Because it sits both on the V6 cycle-path and the towpath of the Nantes-Brest canal, and has every facility (shops, baker, banks, restaurants etc) you might need - a perfect little French village, Gouarec is uniquely well-placed for such a venture as you'll see as you read on...

The Village - The Campsite - The Cycling

The Village of Gouarec

Gouarec is a very special village. It was a thriving linen centre since the middle-ages and then benefited from both the railway and the canal. In fact it is one of the very few villages in Brittany that is built on the banks of the Nantes-Brest Canal. This most beautiful of French canals teems with fish and wildlife and has a cyclepath running 172 miles along its length. The legacy of the railway is that it now forms the V6 cyclepath - this 'crossing' of cyclepaths is unique and means Gouarec is the perfect centre of safe off-road cycling. The village also had the N164 trunk road running through it which was not such a great thing, but 2 years ago the village was bypassed leaving a beautifully quiet centre.

Its history and comparative wealth gave lovely stone buildings in the centre and last year the old covered marketplace was finally rebuilt to make a gorgeous centrepiece to the square. The final piece in the jigsaw of recent changes is the building of a new 25m indoor swimming pool - Gouarec is on the up!

All this means that Gouarec has every amenity you could want in a little French village. A medium sized and a small supermarket, a baker, a lunchtime restaurant (4 courses for 12€/$ (£9) including wine), a superb pizzaria, an excellent creperie/restaurant (my favourite), four bars and of course the three bars and three restaurants at Bon Repos are just a 20 minute cycleride away along the canal towpath ... The village, our gite and the campsite are far from any busy roads. The centre is Napoleonic and in parts much older and a real picture with several magnificent houses, the arched marketplace of 'Les Halles' and the actual square is the sort of place a dog can sleep in the road... Late night activities are limited to bars, the pizzaria and creperie and in the week most will shut after 10-11 pm leaving it the sleepy little village that it is. If you are looking for wild nightlife this isn't the place for you:-) 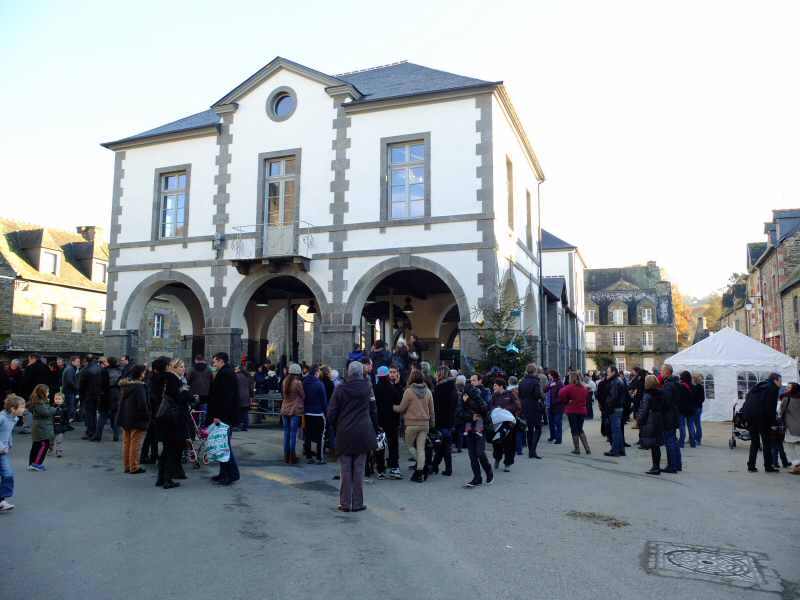 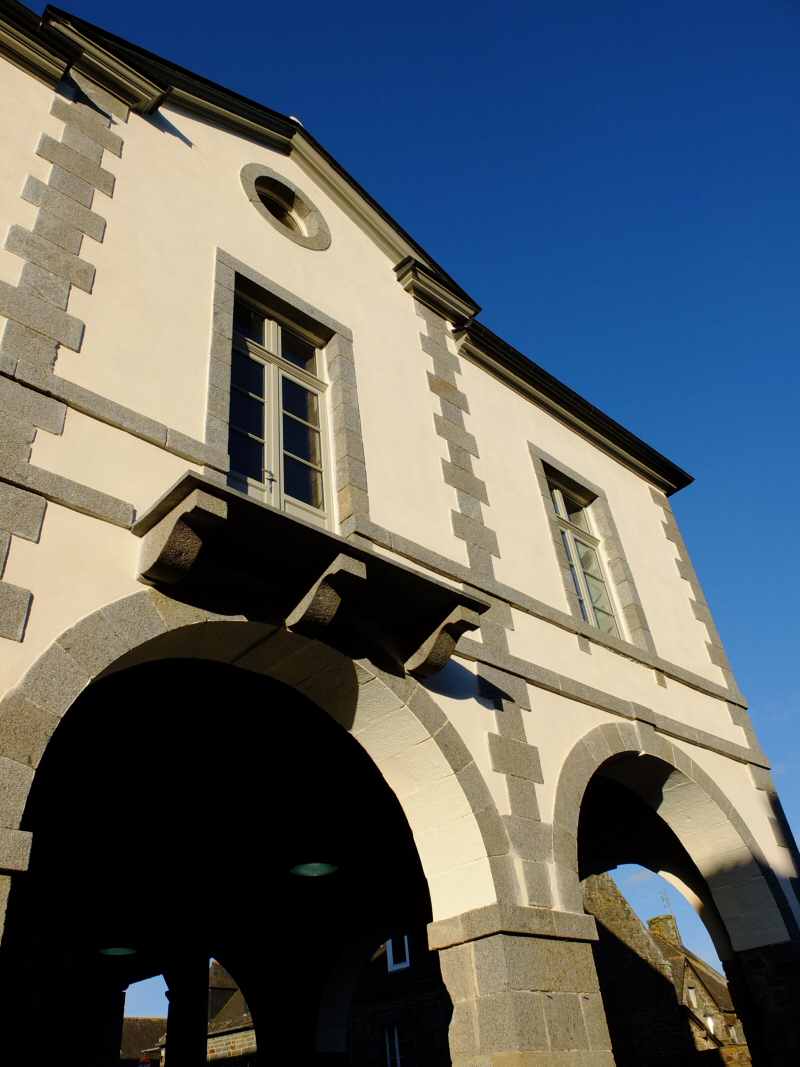 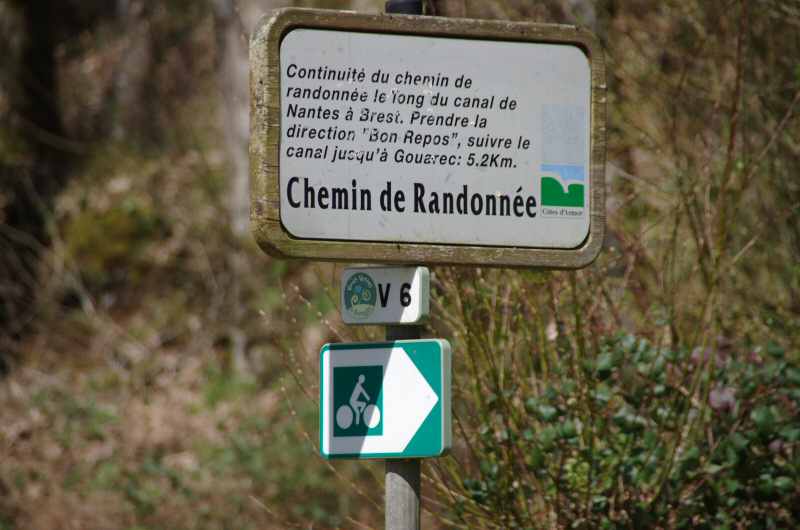 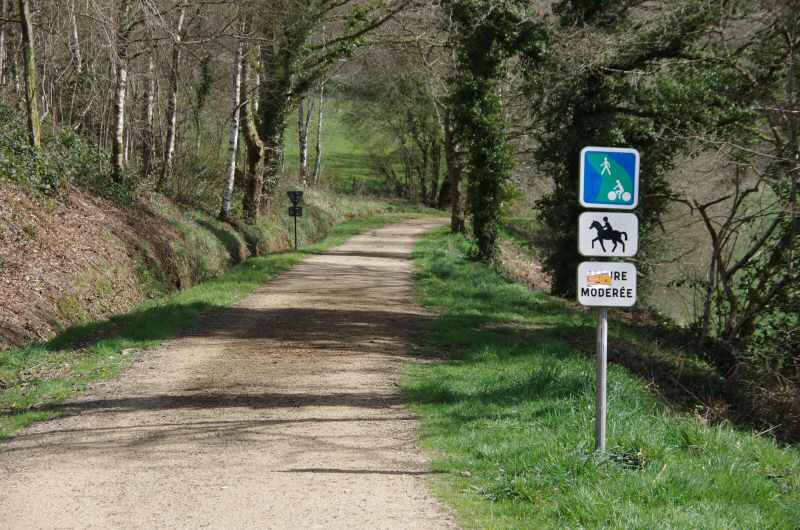 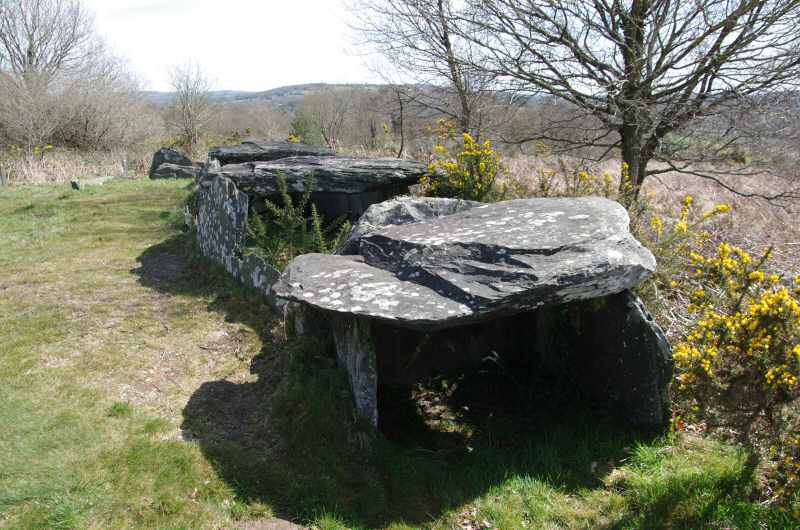 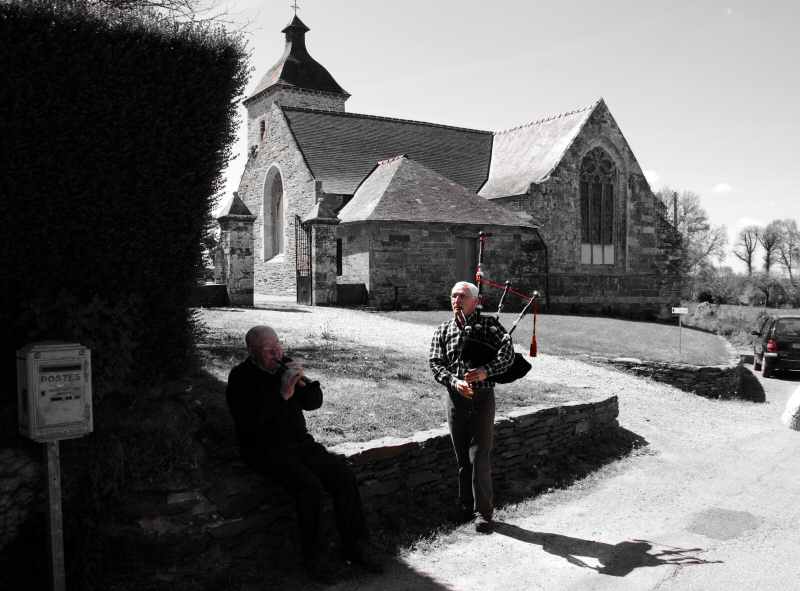 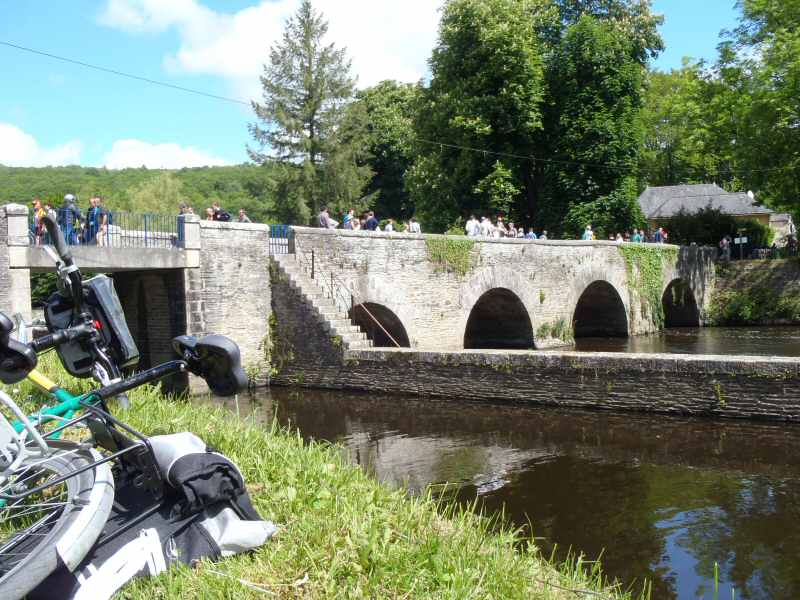 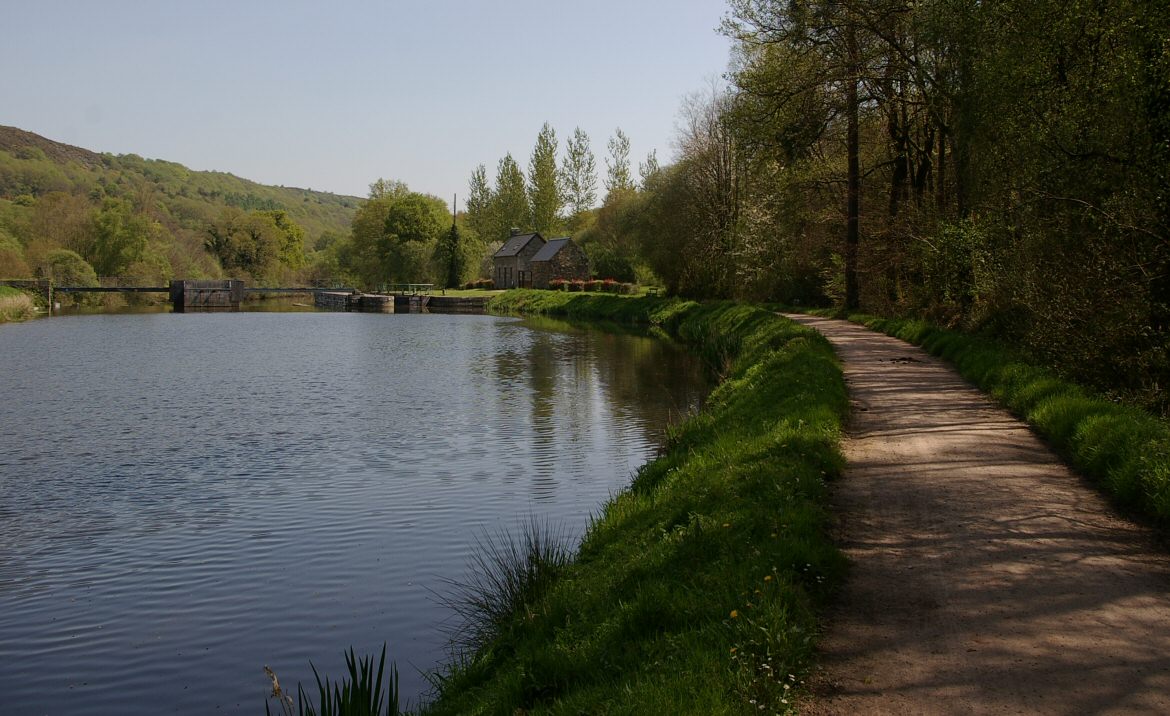 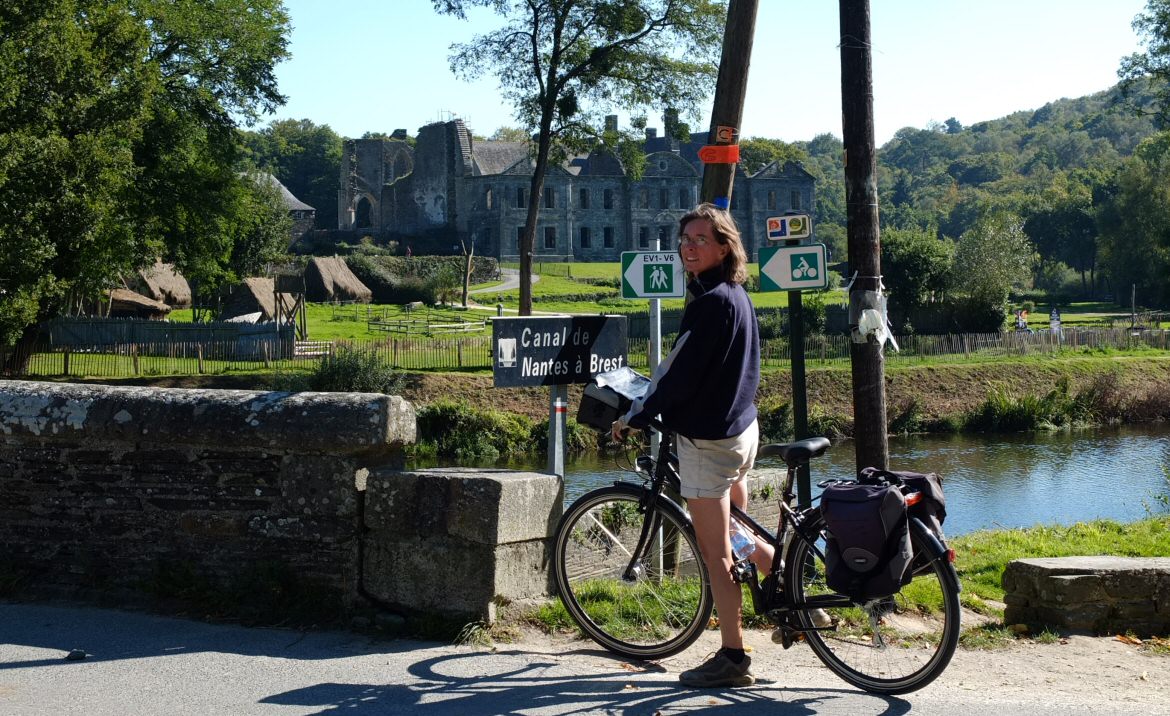 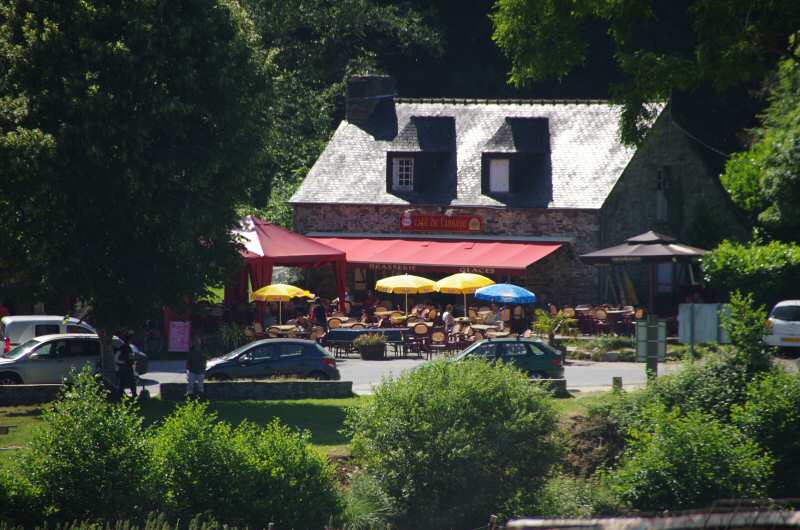 Gouarec campsite is now run by us and is called 'Camping Tost Aven'.  This is a big campsite in terms of area, it covers about 6 acres, and yet there are rarely more than 100 campers. That means there are (literally) acres of grass for children to play and you are never hedged in by caravans all around which makes it perfect for our fixed centre holidays. The facilities comprise an excellent toilet block, a huge sandpit and a play area with slides, swings and climbing frame - parents know that a big sandpit will keep an under 6 occupied all day especially if there are other children there... There's also no 'through road' on the site, just a lane in which means traffic is slow and safe. For those without kids who are starting to shudder, the sheer size and openness of the site mean you're not in the centre of some 'Lord of the Flies' scenario and you'll have no problem finding a quiet corner. The campsite is bordered on one side by the Nantes-Brest Canal (one of the prettiest in France), and on the other by the River Dore (d'ore - the river of gold, the river still contains enough gold to attract the odd prospector and we supply panning gear!). These two waterways teem with fish and if fact a large number of the campers will be there simply for the fishing. The canal runs for 172 miles and has a cyclepath along it - one of the main attractions for cyclists staying there because the canal, and it's scenery are stunning.

Unlike some French campsites it doesn't have is a late night disco, bar or similar, essentially it's quiet, friendly and homely - those looking for French nightlife will be disappointed... For more details on the camspite and prices for non Breton-Bikes please go here.

You'll find some of the highlights of the area here, but as already mentioned the jewel in the crown of Gouarec is the Nantes-Brest canal which flows through the village and we honestly believe it to be the prettiest canal in France. The towpath is obviously pretty flat and the surface 'cinder', our bikes ride over it very well. It gives you the chance to cycle either way, East takes you to stunning 'Bon Repos' - the perfect picnic spot with a ruined abbey, restaurants, bar and play area, and a lovely little Sunday morning market. A short climb up from  Bon Repos takes you to some of the covered tombs at Liscuis. Then on to the 'Lac de Guerledan', a large 'estuary like' lake where at Beau Rivage you'll find a beach where even small children can play in safety and there are bars, restaurants and creperies. Also within easy riding is Forge Des Salles the Buddist monestry and the Forest de Quenican and much, much more.

Going west takes you through forgotten French countryside that has to be seen to be believed - ultimately all the way to the town of Carhaix if you feel like a longer ride (20 miles each way).

As if that isn't enough there's a cyclepath from Gouarec that follows the old railway line. This is an easy ride to the town of Rostrenen where on Tuesday there is a wonderful street market, then on the lake at Mael Carhaix.

Besides this totally car free cycling there are a mass of little quiet lanes where you can meander for hours and arrive at tiny creperies hidden in the wood, or cycle to another little market town - there really is too much to do...