You are here: Home » Brittany » Things to see and do » The Rigole D'Hilvern V8 Cycle-Route

One of Brittany's forgotten cyclepaths

We're so lucky in Brittany, especially the centre, in having some lovely family-friendly cycling routes. The most famous is obviously the Nantes Brest canal cycle-path, but you can cycle the V6 from Morlaix to the canal, cycle down the Blavet to Lorient and so-on. But one very unusual cyclepath is usually forgotten and that's the wonderful Rigole d'Hilvern

When the Nantes-Brest canal was built one of the greatest challenges was to supply enough water to enable it to work with it's huge number of locks - 238 in all. One solution was to make artificial feeder rivers to critical points, and the most significant of these is the Rigole d'Hilvern.

In its own way the construction of the Rigole is as impressive as the canal – designed to bring water down from the hills north of the canal it runs for around 50 kms. The amazing thing about it is that it runs almost level the whole way (obviously a very gentle 'drop') and so it stays high. Unlike the canal which is cut through valleys the Rigole clings to the side of hills like a corniche road – so you get views over the countryside as you ride along. 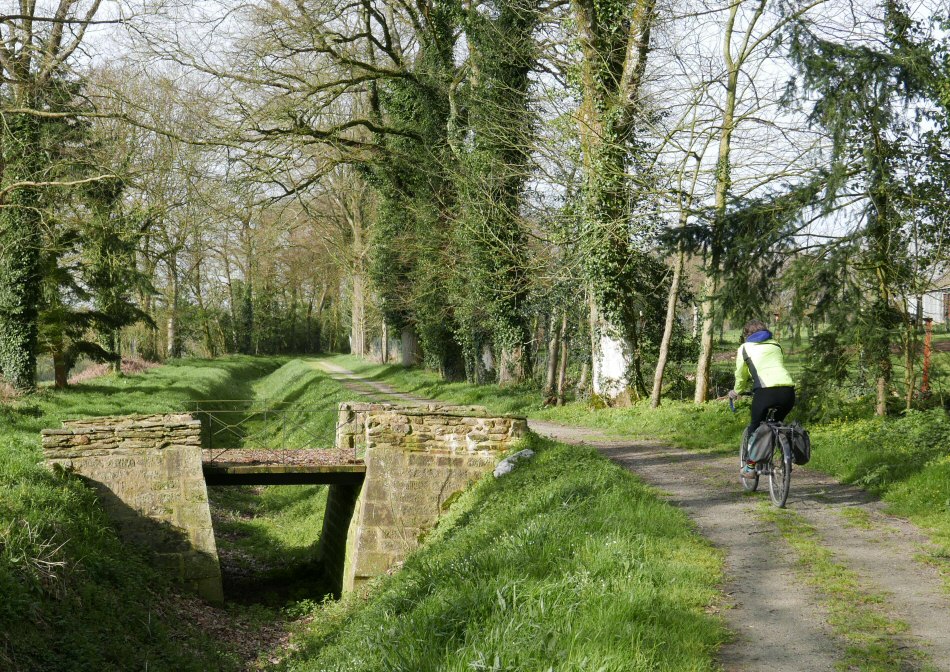 What the Rigole doesn't do is get you anywhere quickly. Because it follows the contours of the land it is unbelievably twisty so what would be 20 km by road takes over 50 km by the Rigole. But the whole point of cycling the 50+ km is not to get from A to B but to cycle on a totally traffic free route through stunning, unspoilt countryside and with no hills;-)

The surface of the cycle path is compacted 'cinder' rather like the canal towpath, and as such rolls pretty well, though some areas can get a bit grassy at times due to the low use. Hopefully this article will encourage more to cycle along it and help solve this problem, but the fact remains that in cycling the length you are quite likely to not see another cyclist the whole way. 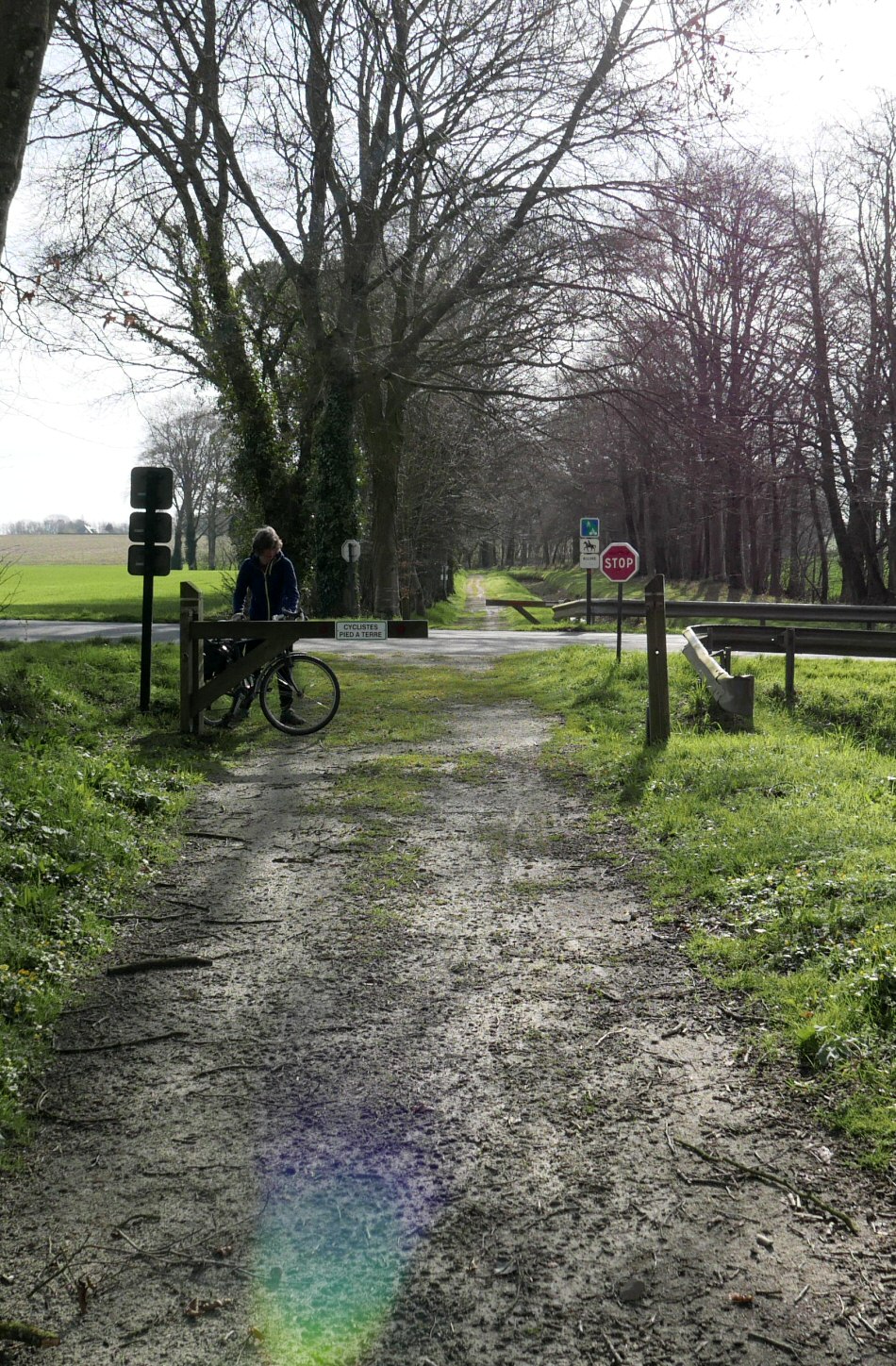 Given the surface I'd recommend a minimum of 28mm tyres on your bike – personally I'd be a lot happier on 35mm tyres, but this means that any modern hybrid cycle or classic touring bike should find the going just fine – no need for a mountain-bike though of course they would do just fine as well.

The Rigole itself is a deep ditch cut into the ground, with the cycle-path tight to it – and you'll get the occasional road-bridge or track crossing it. Much of the cycle-path runs though woodland and the rest more open farmland and just like the canal almost the entire route is lined with trees – all in all a very, very relaxing place to cycle and enjoy the peace and wildlife of the area. For example on our ride last week we saw kingfishers, woodpeckers, jays, duck, buzzards and a host of smaller birds. 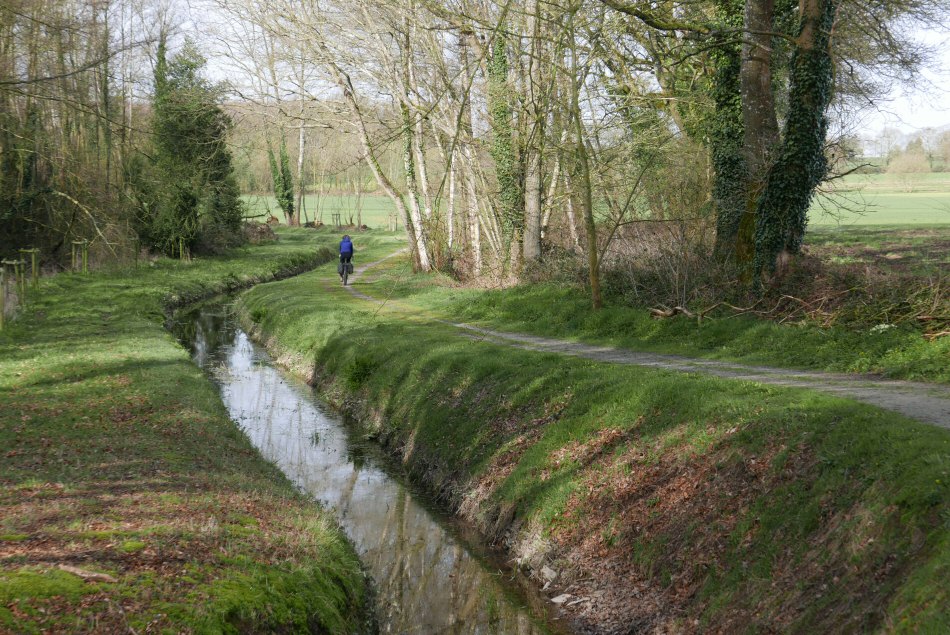 Looking at the official website for the Rigole (cyclepath V8) it gives the impression that the Rigole only runs from St Caradec, north to near UZEL. This I a shame because in fact it also runs south and will get you to within 5 km of the Nantes Brest canal. Most important is that it also crosses the V6 cyclepath at St Caradec meaning that you could start a ride from (for example) Gouarec and follow the V6 to St Caradec then ride down the Rigole d'Hilvern (V8) almost to the canal leaving just 5 km of very quiet and mostly downhill road to Saint-Gerande and the canal. Then looping back along the canal to Pontivy and then Mur-de-Bretagne to pick up the V6 to cycle back to Gouarec – this giving a lovely weekend ride almost entirely off road. It's a loop we will be offering to our cycling holiday customers this year and for familes with small children on their own bikes, or people who simply want to avoid hills and traffic it's absolutely perfect.

So if you are reading this just get on your bike and explore this wonderful route – the more it's used the better it will be and it's just too good to be ignored – no excuses! 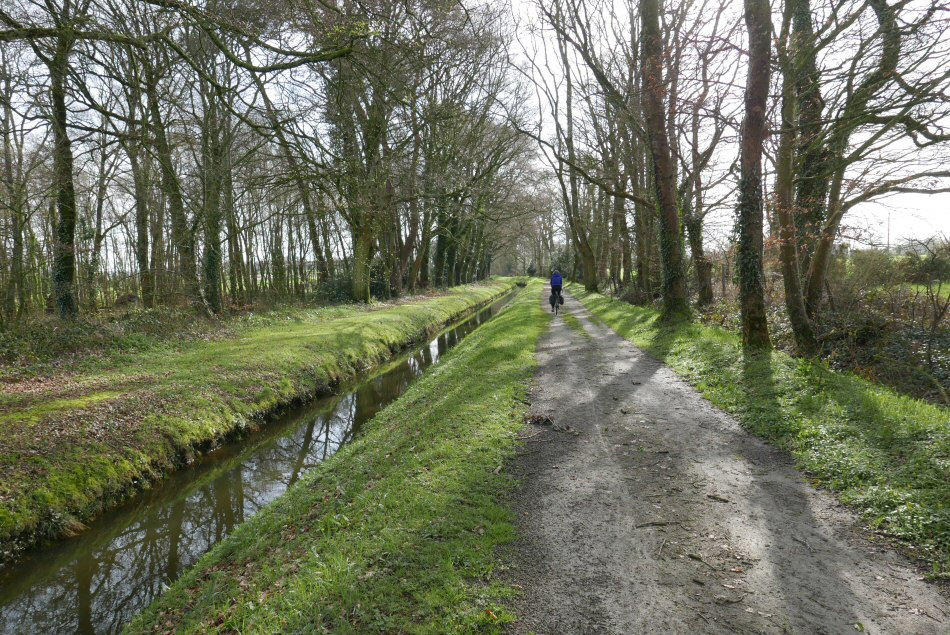