You are here: Home » Home » Cycling Article Blog » The 2CV - The tin Snail

Hardly a cycling article, but after all the 2CV is the nearest a car get's to being a bike, and is probably the most French machine on the planet so why not???

Written over 20 years ago, it still all holds true - except that you need at least 5000€ for a decent 2CV and they are increasingly rare. But for those who'd like a go ours is for hire at just 95€ a day - but beware - once tried you may join the cueue looking for one...

When I was a kid we had a great stupid dog that worshipped my father. He would go berserk when he heard the sound of Dad’s car as he got back from work. The problem was that my fathers car was a Morris Minor, so our dog spent quite a lot of the day barking until he finally recognised the slightly blowing exhaust of our own Moggy. Now 30 years later I don’t have a dog, but my two year old son does a remarkable impression when he hears his mum coming back from work, of course living in France we don’t have a Moggie, but the nearest equivalent - a 2CV. 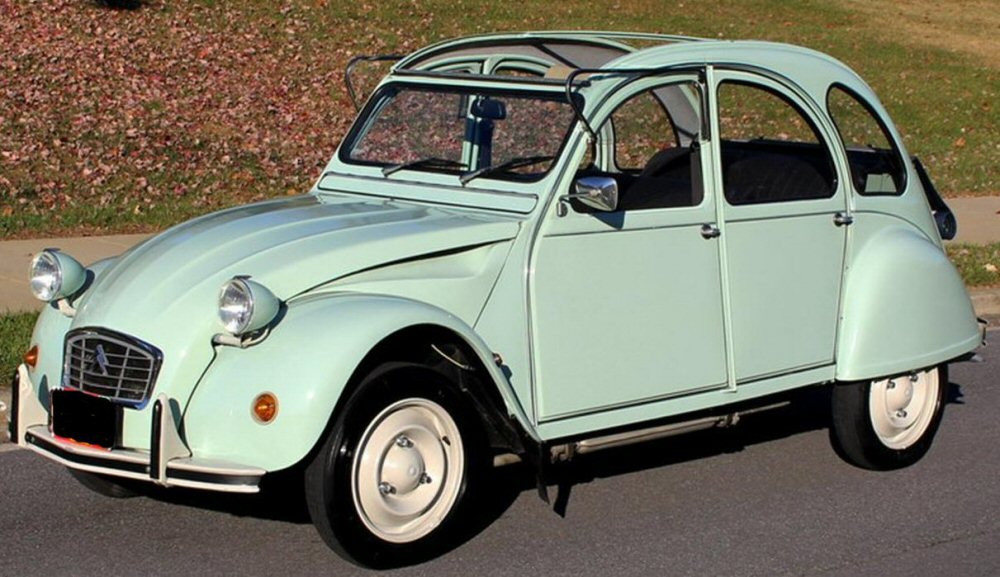 Why did we buy this refugee from the 1930’s, for many years the slowest car you could buy, (the 0-60 time is measured in minutes), rather than something more modern? Well firstly you can’t drive one without smiling, I’ve known many people who have owned them and they all loved them, what other reason do you need? The next step was of course to find one for sale, and here we hit our first snag. We live in rural Brittany and the 2CV is THE peasants car. Your average Breton peasant has the very healthy attitude that if a car goes then there’s no point in changing it. It’s not unusual to see one of your neighbours whom you thought was stony broke sending his beaten up 2CV to the crusher and the next day driving up in a brand new car. However this results in very few decent 2CV’s coming up for sale. We spent a fruitless month chasing around the country looking at various decaying wreaks with horrendous price tags before coming across a pale turquoise 2CV with only 30,000 miles on the clock and not a spot of rust for a £1000. We had got the paper that morning, phoned and went there straight away, the chap selling it said he’d had 12 other calls in the hour since ours. Needless to say we handed over the cash and chugged home.

From that moment on the “affair de coeur” began, but what is it that makes the 2CV so very special? First off it is a convertible, and being a sports car fan the idea of a four seater convertible was too good to miss. The next thing is that you need to drive it. In a modern, powerful saloon you are almost a passenger, insulated from the road, wrapped in technology designed to make the experience as stress free as possible. In a 2CV you need to read the road, change gear before the revs fall, judge corners to perfection so you can sweep round without loosing momentum - a 2CV will corner as well as any modern car, the difference being that the car leans over like a square rigger in a gale, leaving unsuspecting passengers gibbering wreaks until they realise that this dramatic cornering style is perfectly safe, just part of the 2CV’s character. Cross country this cornering power and the involvement of the driver means that you cover the ground at a fantastic rate, you rarely overtake a 2CV in France! But that brings us to the 2CV’s one weakness, an engine with the power of a large lawnmower, and the aerodynamics of a garden shed means that overtaking needs to be planned like a military campaign. Catching up your quarry is no problem, but without the power to accelerate past you need to start from way back, building up speed and deciding at the last minute whether you can get past. A casual observer would see two cars, the leading one cruising along at a steady pace while a manic refugee from the 1930’s repeatedly hurtles up behind only to fall back and repeat the process again and again until finally swooping past and disappearing into the distance.

You might think that the 2CV would be the worst possible motorway car, “au contrare”! First you put cotton wool in your ears, which will reduce the noise of the wind and screaming engine to bearable levels (passengers too as they won’t be able to talk), then set off. A couple of minutes later you will have wound your faithful steed up to 70 mph, headwinds permitting, and will be looking for your first victim. There! in the distance, another 2CV! Now begins the stalking phase. The 2CV in front will inevitably be going flat out, so you need artificial aids if you are to catch up. On French motorways you won’t have long to wait before a juggernaught rumbles past. As soon as it is past a quick lane change and into its slipstream. As the lorry will be doing about 80 it has a huge slipstream and if you can get close enough this will suck you along, don’t worry about the overrevving motor, they never break. If you reach an incline the lorry will slow, and when you reckon you can go faster on your own nip out from the slipstream and begin to crawl past. This is not easy... At first your momentum will draw you alongside, but then you hit the bow wave of the lorry which will stop you dead if you haven’t timed it just right, leaving you no option but to fall back and try again. If you get it right you will hopefully see your rival a little closer. At this point it must be stressed that if at all possible you must try to sneak up unnoticed, as if you are spotted the other 2CV driver will inevitably begin the same slipstreaming tactics and you will never catch them. If you get it right you will sweep past your rival in the “tow” of a 40 tonner, at this point it is “de rigueur” to turn and smile enigmatically. Without exception the race will now truly be on. They will immediately pull out behind you to share the tow. from now on the real 2CV motorway racer will show his/her metal by the thoroughness of their preparation. For a real competitive edge try the following - firstly try to avoid taking passengers as this does severely restrict uphill performance, it is unethical to throw them out at 70 mph so this does require forethought. Also the radio antenna must be retracted ( you won’t be able to hear it anyway) and the door mirrors must be folded flat (1 mph each). As in formula one racing your fuel load should be just enough to get you to your destination and no more, weight is vital! The true fanatic will even remove windscreen wipers if weather permits, and pump the tyres extra hard. Suitably prepared you ought to be able to pull away from your less experienced rivals, however they may resort to slipstreaming you, which is very difficult to shake off without resorting to drastic action. Of course by now you will probably find that you have missed your turn off... Using this technique you’ll find that motorway journeys that would seem tedious in an air conditioned tin box listening to radio 2, will literally race by!

It is this manic sense of fun that is equally valid 70 years after it’s conception, that makes the “tin snail” not only the greatest French car of them all, but also the greatest car of all time. They don’t last for ever, so get one while they’re still around! GH.

Note - written 23 years ago so 'Son' is now 25 and Kate drives a Suziki Jeep! Our dear 2CV finally died in a conflagration of truly viking proportions - but we've now bought an identical car and it's like welcoming home an old friend - it's also available for hire at 95€ a day...