You are here: Home » Home » Cycling Article Blog » A quality touring bike on the Cheap – The VSF T50s

A quality touring bike on the Cheap – The VSF T50s

A bike to take on your first cycle tour...

This is the first in a short series of reviews of good value bikes that are capable of loaded cycletouring - this month the VSF 50s.

We hope you enjoy reading this short article and will go on to read many more. This website exists both as an information hub for cyclists – (and we offer free advice by email) - but also as a commercial site to sell our cycling holidays in France. For 30 years we've been the only company in the world offering fully equipped cycle camping holidays and now also offer hotel based cycling holidays and even run our local campsite which is uniquely well geared up for passing cycletourists - it is this experience that informs so much of what I write here.

Google is now punishing sites with high 'bounce' rates and also sees these articles as being nothing to do with cycling in France. That means if you read one page and then leave Google marks us down. If you don't click on one of the cycling holidays links in italics here Google sees this as a 'technical' site only. So please, when you've finished reading just click on any other link on the site before leaving - it would be a big help - otherwise I may be forced to remove such articles from the site and that would be a shame... 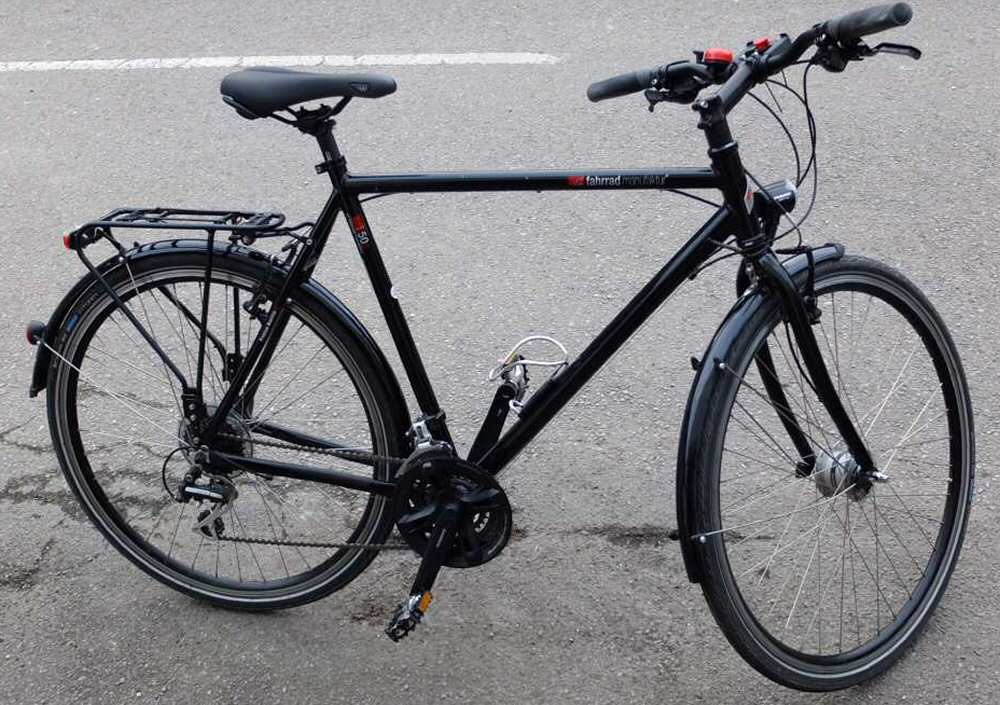 What makes a touring bike.

I recently spent a few hours looking at the various offerings of the bike manufacturers out there to find what I consider the 'base-line' for a decent touring bike. Now before I go on let me clear up one thing – as far as I am concerned any bike that someone tours on is a 'touring bike' – if you can't afford a 'proper' touring bike then just steal some teenager's 20 year-old mountainbike and ride into the sunset.

But here I'm trying to find a few bikes that are up to loaded cycletouring at the lowest possible price. Inevitably all are 'Hybrid' based because that's where the big market and the economies of scale are, but as most of the world tours on 'flat' bars, and with all sorts of bar-ends available it's less of an issue than before. So here is my list of the requirements for such a bike.

1 – A freehub. Now this will be controversial, but cheap hubs with a freewheel break axles, and a broken axle will stop you dead and mean hunting down a replacement – probably a whole wheel, and that would ruin a holiday. The basic Shimano freehub design supports its axle at both ends and even the cheapest is ridiculously reliable. The snag is that bike manufacturers like to put glitter on their bikes to attract customer. That means that with a limited budget they are going to spend money on things that are either easily spotted, or play the numbers game. So for example a bike may get a better chainset or rear derailleur, or maybe more gears before any money gets spent on a rear hub. The fact that an otherwise well-specced bike may be running a cheap hub and freewheel is easily hidden and often detailed scrutiny of a bike's brochure won't reveal the truth. You need to see the words – 'cassette' or 'freehub' otherwise walk away. Or teach yourself to identify the difference in the shop, it's not easy to spot.

This tendency in bike manufacturers has an unfortunate side-effect in that because the money goes onto more visible improvements first, the point where a freehub will be fitted is generally over the £350 mark – almost immediately every bike cheaper than that comes with a fundamental weakness. Thus our 'lowest price' benchmark is fixed...

2 – Suspension. Another 'shiny', showroom-friendly item that manufacturers fit as soon as the budget allows. And sadly, cheap suspension forks are a disaster on a loaded touring bike. They are heavy, less stable than proper forks and will quickly develop play. Again the marketing department of most companies dictates that the point where there's enough money for a freehub is also where they'll fit some cruddy sprung fork. In some ranges it means that your choice is one model where the Freehub has arrived but the bouncy fork hasn't! Often around that £350-400 mark;-) What you really need is a Cr-Mo steel fork. This should be strong enough to survive touring but because the metal can be made fairly thin it will have enough spring in it to make the ride comfortable.

3 – Mudguards and a rack – if it doesn't have them then you'll have to fit them and that costs. If there aren't fittings for them it's a pain...

4 – A decent strong frame – As we've been forced to the £350+ mark anyway you should take this as a given. You're not going to get butted steel at this price point but a decent Aluminium frame will be the norm and will do just fine.

So there we have the basic criteria for our tests. Freehub, Cr-Mo fork, mudguards/rack and a suitable frame.

After that lengthy preamble let's look at this month's bike – the VSF 50s.

VSF are a German company which specialises in hybrid and touring/trekking bikes – it doesn't make cheap bikes and the 50s is right at the bottom of the range. In Europe it retails at 550 Euro which at current exchange rates is about £480 so pretty close to the cheapest possible. What I am here to tell you is that this bike is superb value...

The 50s comes complete with mudguards, rack and a full dynamo lighting system – all very good quality. There's a side stand as with all German bikes, which is singularly useless (ditch it) and the pedals are the two piece platform type where the 'cage' falls off after the bolts inevitably work loose (a drop of superglue on each will stop this). IMO if you fit cheap pedals better to go really cheap and one-piece... Otherwise the one thing I'd mark down is that the dynamo is a hub-powered unit and the hub is the bottom of Shimano's range. It uses bolts rather than quick-release and so you need to carry a spanner at all times and it's a fiddle to get the wheel aligned in the dropouts. Personally, and with the advent of brilliant LED lights I think the whole dynamo system could be dropped but apparently it's essential for the German market... Still it seems churlish to complain. The rack does lack support for the rear of a pannier which may need care in positioning, careful choice of pannier or a bodge... There's even a basic mini-pump supplied... 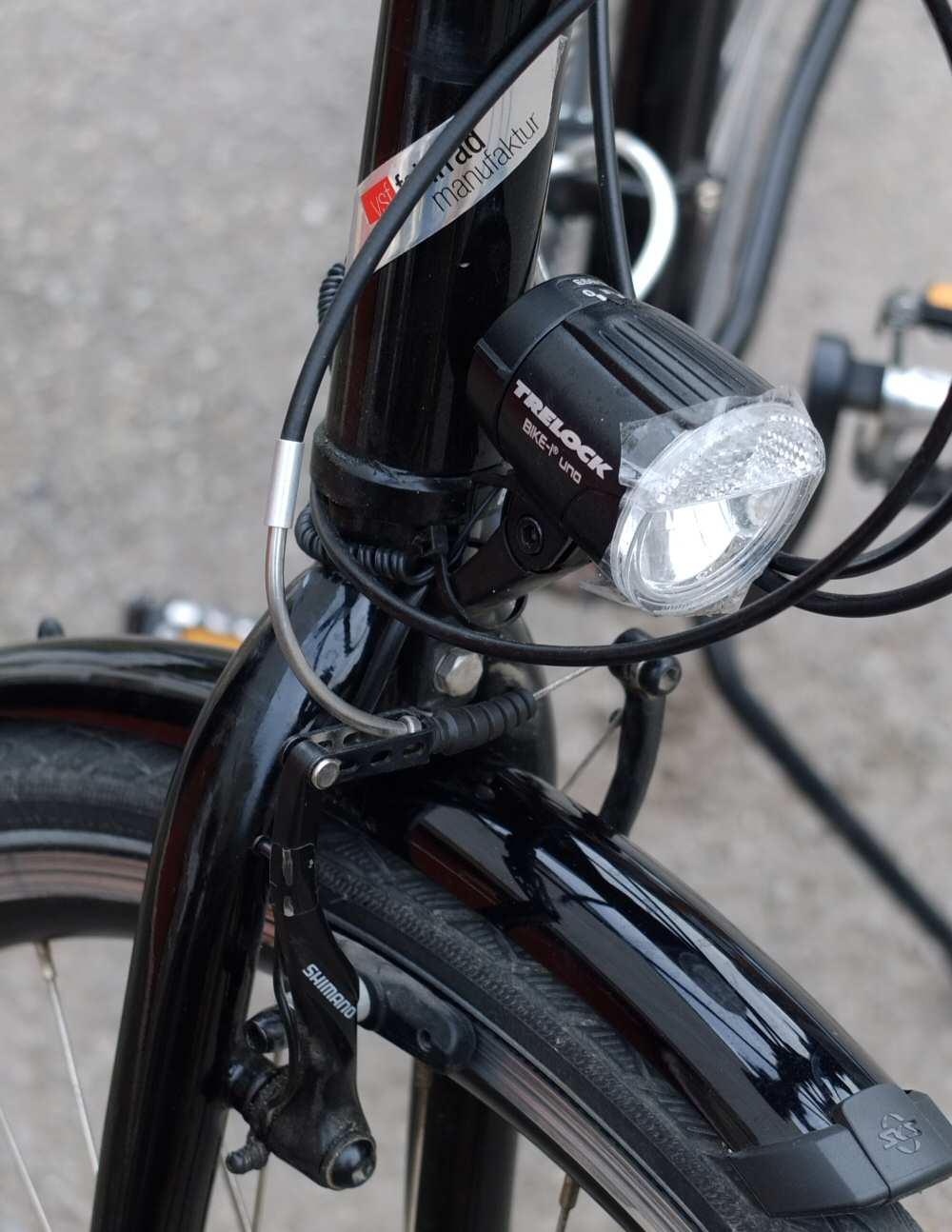 The main build kit is 24-speed Shimano Acera/Altus throughout – basic hubs, gears, chainset and brakes. All do the job just fine and the inclusion of Shimano brakes is nice as it's often a place that gets penny-pinched. The rear brake has enclosed cable all through its length which makes it very smooth and resists water entry, but means if you do need to oil the cable it's a pain. 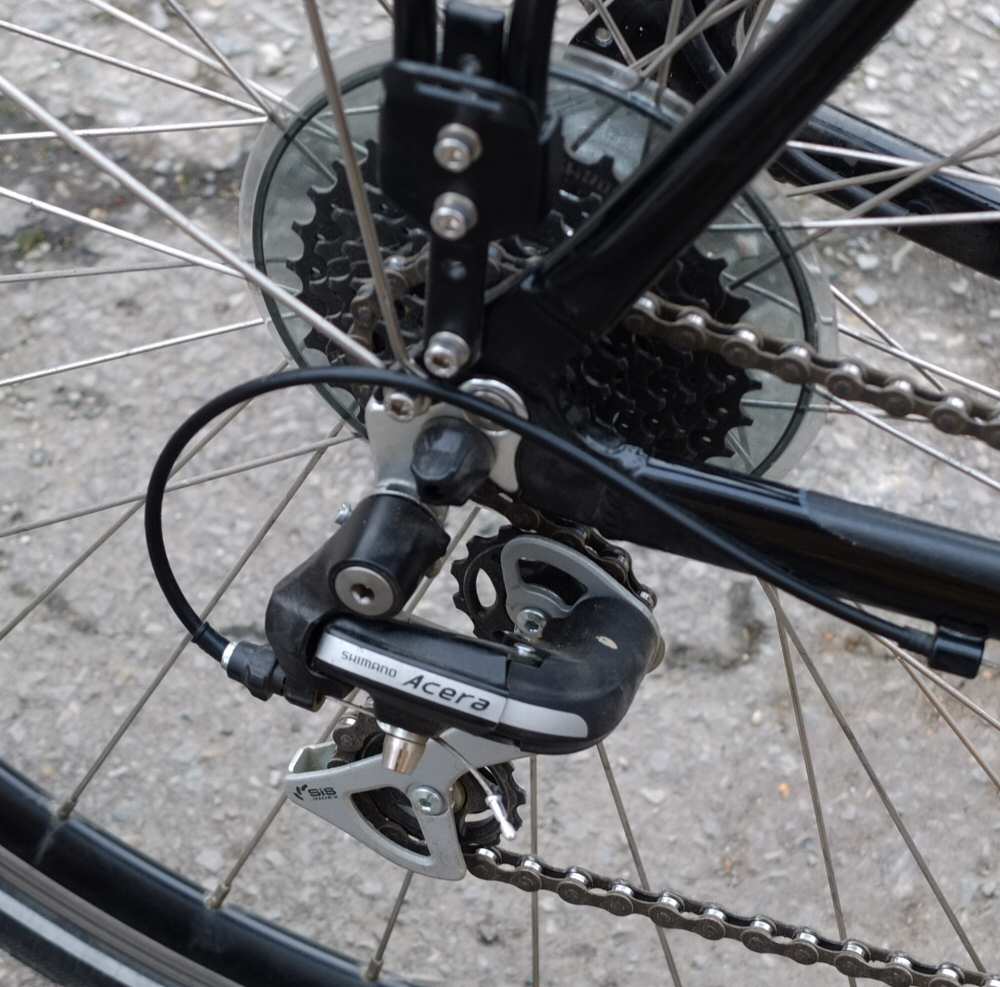 My one complaint here is that the bike runs 700c wheels; this combined with a full-sized chainset 48/38/28 means that the bottom gear of 28 → 32 isn't low enough for mortals doing loaded touring. I know I harp on about this as almost all manufacturers are guilty of the same thing, but with 24 gears to play with there really aught to be one decent 'granny'... 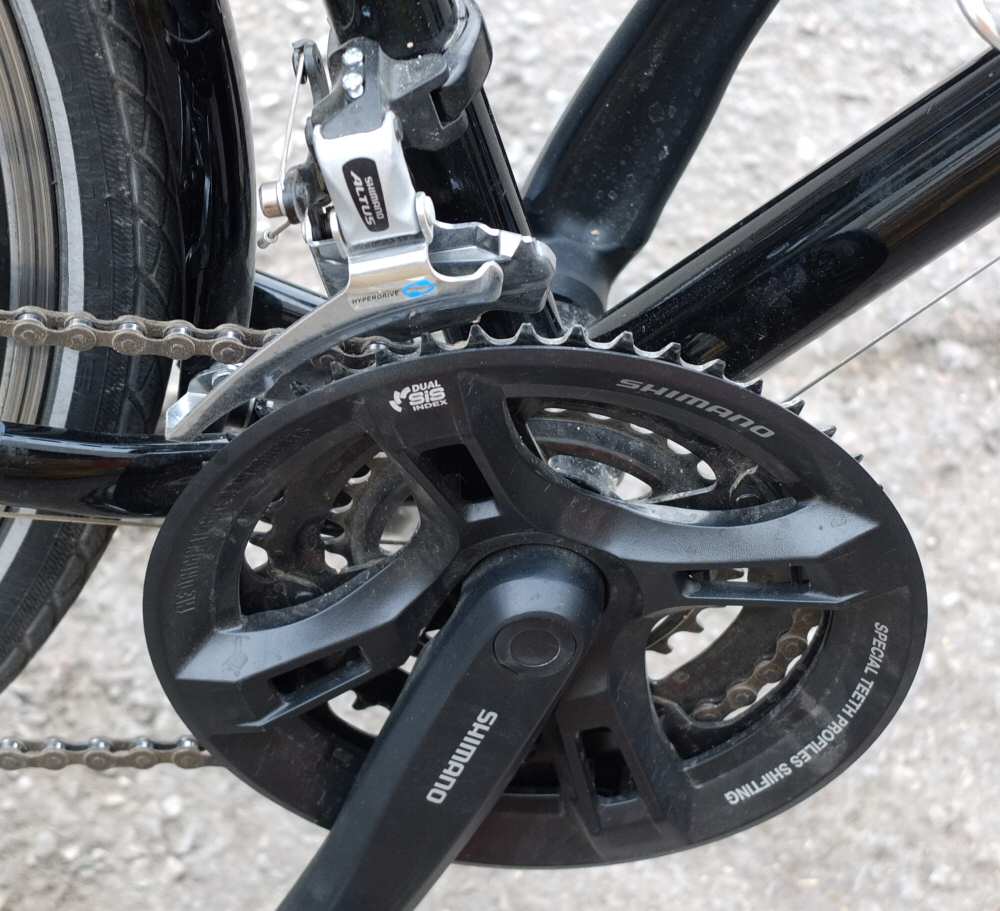 But for me, the thing that most impressed is the total lack of penny-pinching – the bars, quill, headset (Ritchey), seatpost, saddle are all decent quality. Looking at details even the allen bolts are good quality stainless. This is a hobby-horse of mine – I hate manufacturers who use the cheapest possible bolts in order to save 50p a bike and leave the owner having to either change them all or end up with stripped heads, broken bolts and worse.

This quality continues to a superb black paint finish and even the packing is better than any I've seen on any bike regardless of cost. Typical German efficiency, they've obviously worked out that the cost of having custom packaging that a worker can fit on the bike in seconds saves more money than using scraps of corrugated cardboard, gaffer tape and zip ties that need 30 minutes to fit.

Short this... German made alloy rims, Shimano hubs and 36 stainless spokes. Tyres are Schwalbe Citizen – again excellent at the price. Good basic wheels and after having used several for this season of hire I've yet to have a problem. They'll get you through a few tours;-) 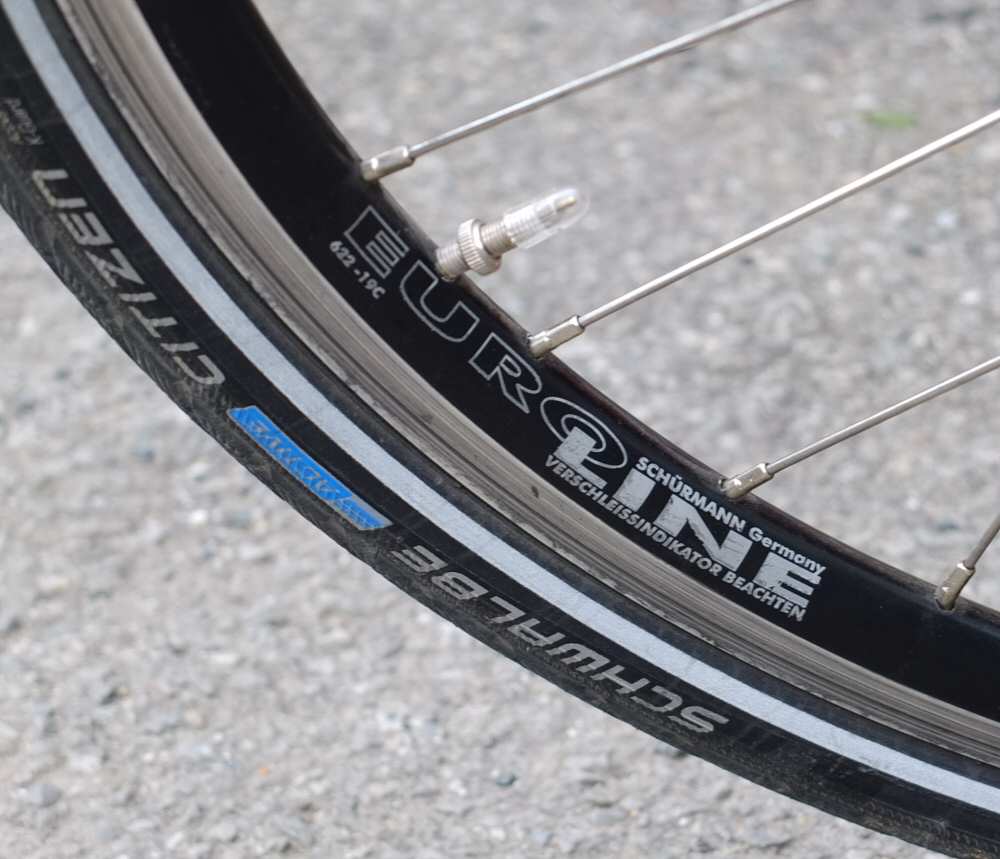 Unsurprisingly we find an Aluminium frame, but which in this case is very classic looking with quite small diameter tubing and only a gentle slope to the top-tube (there is a 'lady's' version). Combined with curved Cr-Mo forks and nice soft, stable angles the bike rides very well. It doesn't have the spring and liveliness of a butted Cr-mo frame but then you'd pay double the money for a bike so equipped. Loaded up it remains stable and descends well. At 14-15 kgs it's not too porky and once loaded up the odd kg matters not. There's only one bottle-cage mount but there are eyelets for a front rack. Overall it's a frame that matches the quality of rest of the bike well and if you wanted to do more serious touring would justify upgrading some components, but it's not like the Ridgeback Expedition where you have a frame that could easily be graced with top-of-the-range components. 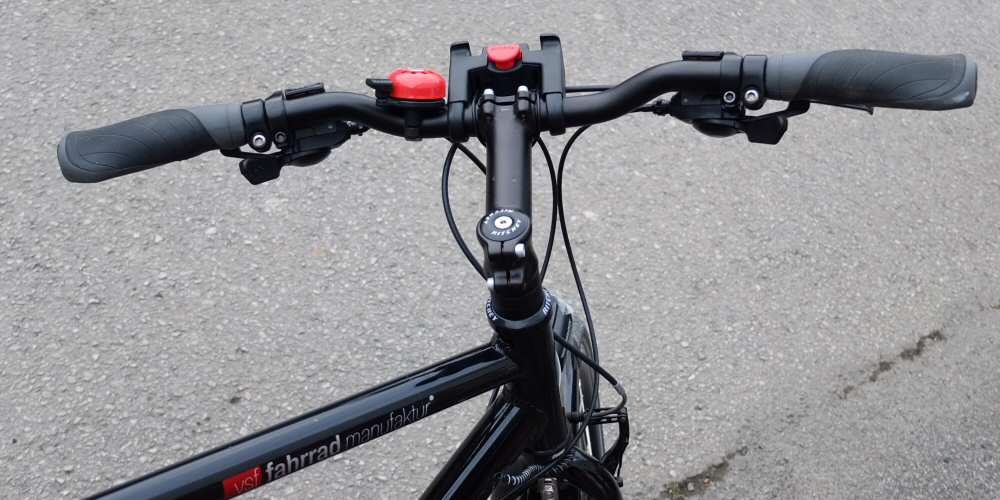 I'm actually quite shocked. Sometimes riding this bike has me wondering 'why spend more?'. It's nice to ride, does pretty much everything a 'daily ride' should do and yet is quite happy loaded up to go on tour. It looks really classic, but most impressive is the sheer attention to detail – you get the impression that VSF have lavished as much care and attention onto this bike as to their top-of-the-range 4000 Euro jobbies... Generally cheap means a bit nasty, but you just don't get that impression and I'd be happy to take one on tour. For under £500 that is sensational. To significantly better it you need to spend near twice the money on something like the aforementioned Ridgeback.