You are here: Home » Home » Cycling Article Blog » Cycling with children – how to do it properly

Cycling with children – how to do it properly

A quick guide to help you get the most from cycling as a family. 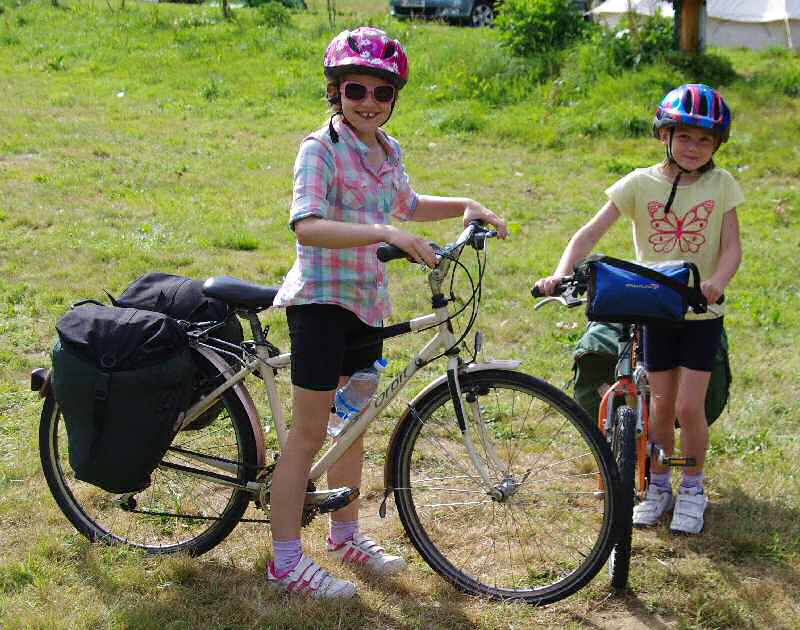 Here at Breton Bikes we specialise in family cycling holidays and of course that means families arriving every week with children ready to set off on their adventures. With that experience and our own three children we've learned a lot about how to get the most from cycling with children. The snag is that almost without exception they come with a few bad habits – both the children and the adults!

Well obviously at Breton Bikes that isn't a problem because we've done it for you but you do need a little trust on sizing;-)

My first 'real' bike was bought for me by my mother unbeknownst to my Father (who thought it too dangerous) – a second-hand, men's 5 speed. It was built like a tank and if I stood on tip-toe my 'undercarriage' was still in contact with the top-tube but not to the point of agony.

I loved that bike... It took me 5 years to grow into it and it taught me one important lesson – how to get onto a bike.

Almost every child under 12 (and more than a few adults) that comes on our holidays has the same problem – a bad habit picked up when they were first on a bike. They start off by sitting on the saddle and then just cycle off. Wrong. You can only do this if your saddle is too low. The result is that their legs are well bent all the time as they ride – it's a bit like walking with your knees permanently bent and about as efficient. If they still have this habit at 12 it's quite likely to continue into adulthood and be one of the main reasons the rider finds cycling hard work – women are particularly prone to this – there's no reason for it!...

If the saddle is at the correct height you should really be on tip-toe (on the points – not ball of the foot) when you touch the ground from the saddle. The problem is getting children to start off. You need to teach them that to start they straddle the top-tube and keep their bottom OFF the saddle. Pull one pedal (personal preference – left or right) to nearly the top and then stand on it and at the same time use this 'step' to get on the saddle. In one swift movement you are correctly positioned on the saddle and the bike is rolling and stable. Sounds ridiculously simple to most adults but it's something that needs teaching as early as possible. Then to stop the process is reversed in that you slide forward off the saddle BEFORE the stop and so it's easy to put one foot down.

Parents often don't like this because their children initially keep falling off because they forget to get off the saddle when stopping – but that is caused by the bad habit. Sooner or later they'll have to either learn or they'll be put off cycling for life.

Once this is done you'll find that your child may well need a bike a size bigger than they are used to which generally brings the side benefit of a larger, faster and more stable wheel – it'll also put off the moment when you need to shell out for a new bike...

Teaching them to ride

Here I don't mean running alongside holding their saddle when they are 3 years-old, but rather trying to teach them basic riding skills. I've covered the getting on-and-off which is fundamental to being correctly positioned, but you also need to teach them pace. The tendency is for kids to pedal like crazy for 30 seconds then complain about being tired. Try to teach them pace and cadence – in the end they will want to do it 'like mum and dad' – inevitably their little legs mean they spin a little faster, but encourage them to adopt a brisk walking cadence and they'll soon get the idea especially when they get to use gears. And on the subject of the all-or-nothing nature of children, always remember they have terrific capacity for recovery. They'll moan all the way about being tired and then spend the whole evening cycling round and round with their friends. Break rides up into easily digestible bits and feed and water them often;-)

And a quick note on 'training wheels' or stabilisers – don't use them – all they'll do is teach kids bad habits and the wrong reflexes that will actually slow their transition to two wheels. Much better to get one of those 'balance bikes' (no pedals) which kids love.

Almost all children's bikes are hopelessly bad. They are bad in so many ways that sometimes I find it hard to know where to start, but the first thing is very simple – weight. They generally weigh a ton. This is because they are welded up in the thickest, cheapest mild-steel tubing the manufacturer can get hold of. This is really inexcusable. Though children are thought of as being 'hard on bikes' that really means they fall off a lot and generally crash about, but there's no way that a 4 stone, 6 year-old is ever going to put as much force through a frame as an adult, and as the tubes are so short they could be made really thin and light without problems.

Next on the list of disasters is suspension. On a child's bike this is going to be cheap steel and because the child weighs so little won't work anyway. I've seen a bike designed for an 8-year-old with worthless full suspension that tipped the scales at 20 kgs.

Your child will feel great when he/she first sees this monstrosity, but the chances are they will quickly give up cycling and leave the beast rusting in the garden

The whole derailleur gear system is designed for adults. It's quite complex to adjust and maintain and most importantly for our subject, it also relies on springs to move the derailleur one way. Now that might seem obvious, but the upshot is that your child's hand must work against a spring which is powerful enough to 'spring' the derailleur to change gear. That's hard enough for the rear derailleur, but the front is a bit of a butchers device and requires a strong spring to hoik the chain off the larger chainrings and children's thumbs and hands are just not strong enough to move it – especially after the cable develops some inevitable drag as it ages.

But unfortunately children (and many adults) just get impressed by numbers – a 24-speed-bike just has to be better than an 8-speed doesn't it? Well no, because of the problem above that 24 speed bikes will quickly become an 8-speed bike stuck on the lowest set of 8 gears as the child can't change the front derailleur. Twist-grips give the best change of this working but even then all you end up with is a bike carting around a load of useless cogs and running gearing that is ultimately too low.

And of course you better be handy at adjusting gears because kids will knock the derailleur out of kilter all the time (as happens with our hire bikes) and you need to be able to adjust it yourself or have an account with the local bike shop.

Your child will probably hate you but the best option if you want them to keep cycling is as simple a single speed as possible until they are say 6-7 and then a rear derailleur only afterwards.

You get what you pay for. Really cheap bikes will have steel rims that are heavy, rust and don't brake in the wet – a little more gets alloy rims...

So when you look for a bike you want it to be as light and simple as possible. There are companies like Islabikes and now Dawes Academy range which are precisely that, with lightweight alloy frames, simple rear-only derailleurs and no suspension. They also have appropriately sized brake levers. These are very (unjustifiably?) expensive, but are a league away from the normal children's bike and unlike most such bikes you'll get a decent price for them when you move them on, which makes them an even better second-hand buy. With them you'll be able to do proper rides... But even if you can't afford one of these you now know the sort of thing to look out for – simple and lightweight. 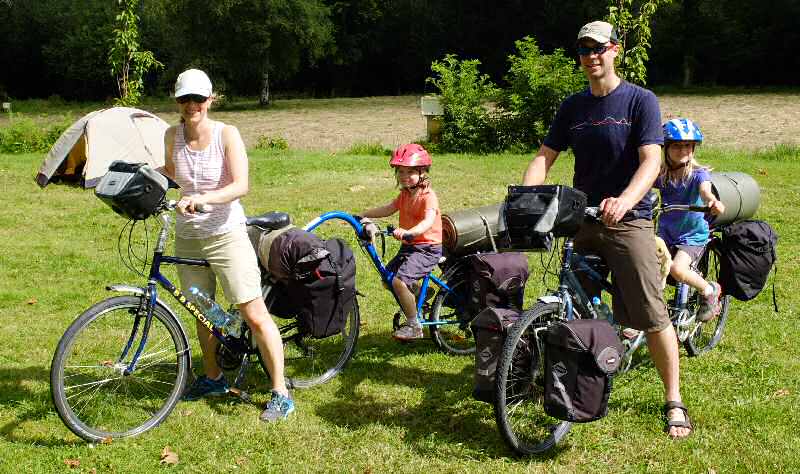 25 years ago we became the first company in France to offer trailerbikes – a third wheel that attaches to an adult bike. Most of these are junk because they use a pivot attached to the adult bike's seatpost and this quickly develops play so that the trailerbike steers the adult bike every time the child shifts position (and they do it all the time). The only trailerbikes that we've found that work are those where the attachment to to a specially made rack. This involves a much better bearing and puts the pivot over the rear wheel. In our case we use a Burley Piccolo – there are other similar designs but they are all expensive. But as with quality children's bikes you do find them easier to sell once they've been used which sweetens the blow a little.

This also applies to child-back tandems. They are a major investment but will work for a wider age range than a trailerbike (generally 6-> near adult) and if you have several children they can be passed on. They are brilliant – so much more stable than any trailerbike and they teach the child to cycle with a steady (adult) pace.

So there you have a few pointers to help cycling with children, but the single most important thing is to just do it no matter what equipment you manage to get. Kids love cycling with their parents and with the increasing number of cyclepaths available it's a wonderful day out as a family;-)