On Thursday the 12 July 2018 the Tour de France will cycle past our base at Gouarec in central Brittany. For those doing fixed-centre holidays with us, either gite holidays or camping, it means that you will be able to see the preparations in the village of Gouarec (which is ideal for such events), the whole panoply of the Tour itself and of course the party afterwards. Both the gite and the campsite are within 100m of the route!

For those who've never seen The Tour it is really something not to be missed. The whole village will be out in force, the village decorated, music, food etc and the whole thing just a massive celebration. 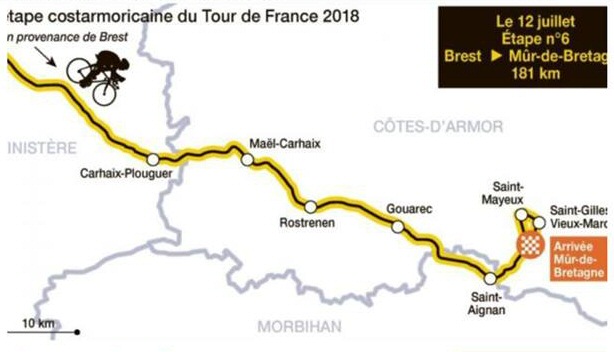 What is especially interesting is that this may well be one of the more important stages of The Tour. Of course all stages are important, but it's true that the ones that really count are the time-trials and the hills. Beyond that many consist of a cruise through countryside for a couple of hundred km followed by a sprint finish that does nothing to alter the overall classification. Normally the stage from Brest to Mur de Bretagne would fall into this latter category – the ride is just over 180 km and though the route is quite hilly and interesting it's nothing that will split the leaders of the race apart. However the finish is up the 'Mur' (wall) at Mur de Bretagne – a 2km climb averaging 6% but with the first km being 10-12%. But even this will still favour the sprint finish as they have the power to storm up that hill – so... The organisers of The Tour have, for the first time, decided that once at the top the riders have to ride a short loop and ride up the hill again! Sprinters already tired from 180 kms and a steep sprint may just start to get caught out. It also means that anyone staying with us can easily ride to Mur de Bretagne (along the V6 cyclepath all the way) and see The Tour pass twice!

To Quote the official site itself - “The Mûr de Bretagne hill always offers precious information on the state of form of the title contenders. This time, a possible showdown between the big guns could be accompanied by a real time sanction. The hill will indeed have to be climbed twice in the last 16 kilometres ! “

For those that wish, the fact that the Gouarec campsite is actually on the canal and cyclepath, means that you have the choice of just walking into the village and watching there, or riding 3 km down the canal to see the riders go through Bon Repos, which with its very narrow bridge could cause all sorts of bother. You could even watch the riders pass in Gouarec and then go on to see the final climb at Mur de Bretagne (in a car - driving fast!)... 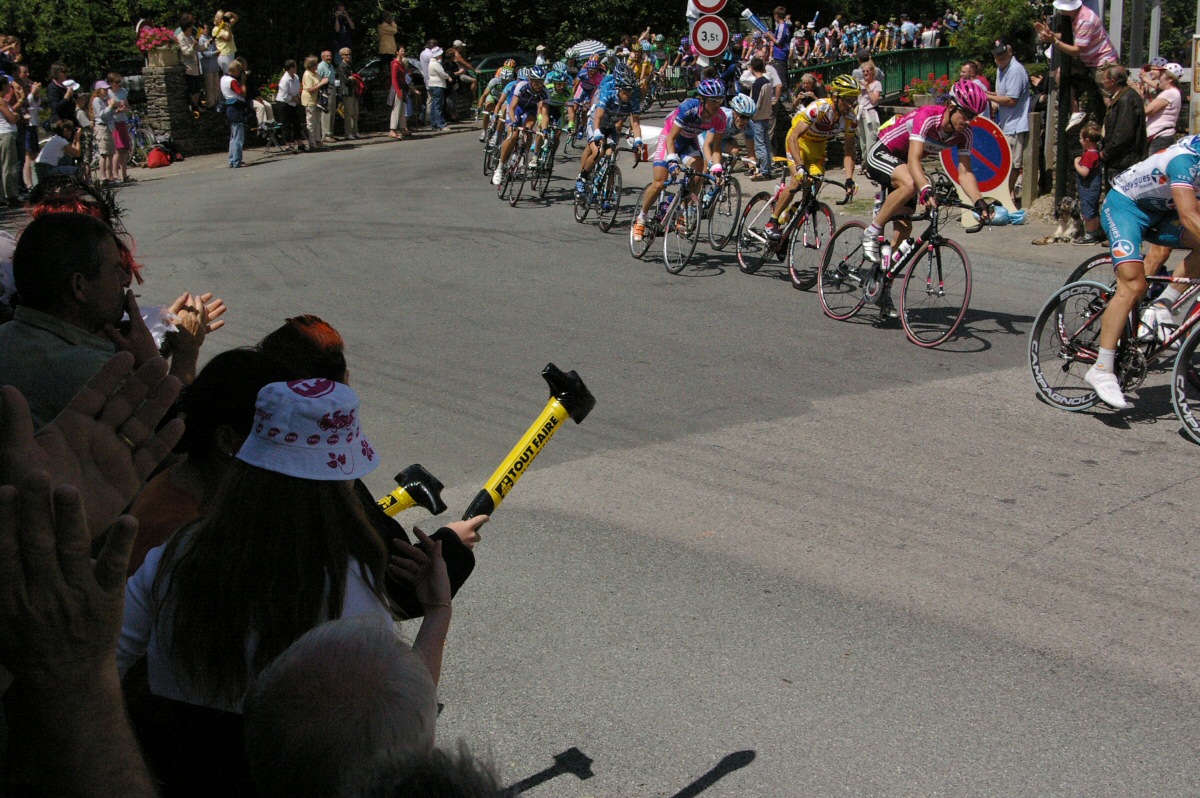 What will you see?

Apart from the celebrations in the village The Tour itself is obviously what you've come to see. Like as not the actual peloton will ride past in a few seconds, with break-aways leading by several minutes and stragglers behind. But this is a small part of the whole 'show' as an immense 'caravan' of publicity vehicles take about 20 minutes to pass as they throw free goodies to the crowd – then come the support vehicles (others follow) and lastly you will see the helicopters approach as a warning of the first of the riders. It's quite a sight I can tell you! 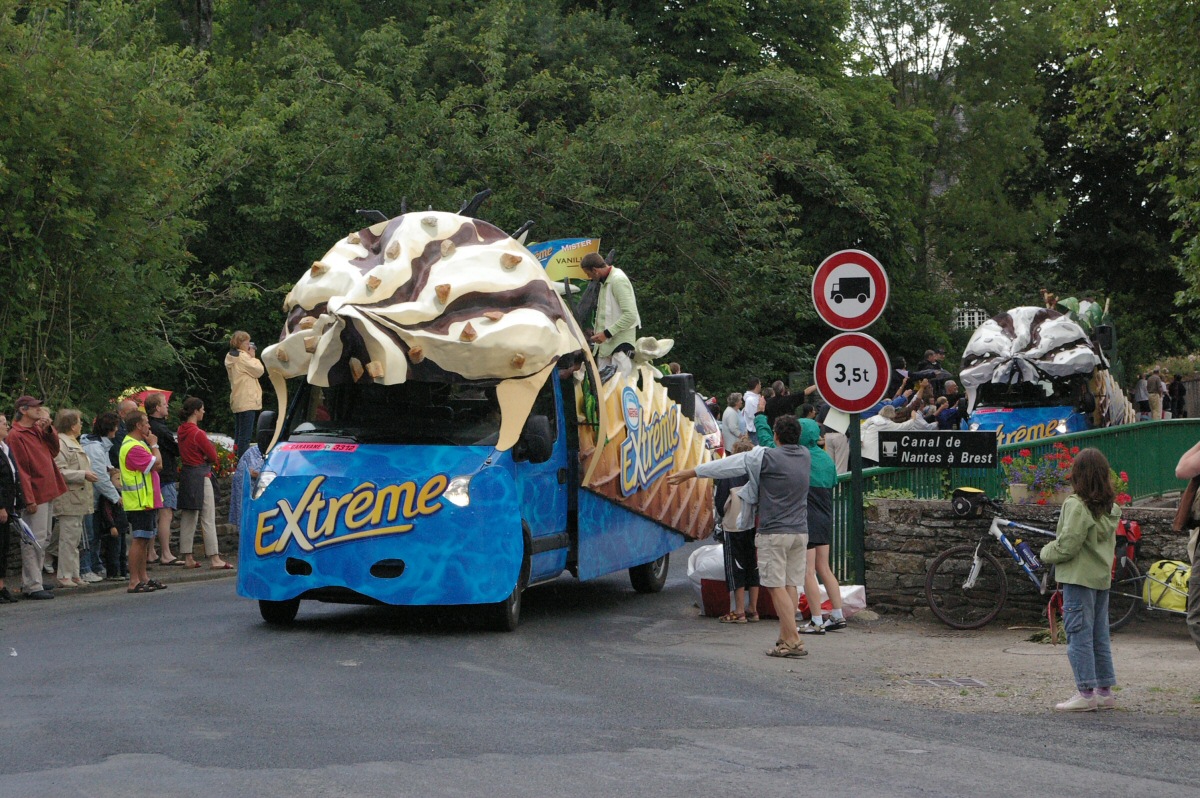 For any enthusiast seeing the Tour de France is something you have to do at least once, and by staying at Gouarec you have lovely surroundings and the chance to see the riders pass at various points. What more could you want – book early to avoid missing out!

Three chances to see the tour!

Not only does The Tour go past our base at Gouarec, it also stays in Brittany for three days, so that if you have a car you will be able to see two other stages in under an hour's drive – the flat stage from La Baule/Sarzeau and more interesting the hilly Lorient/Quimper stage on the 11th. 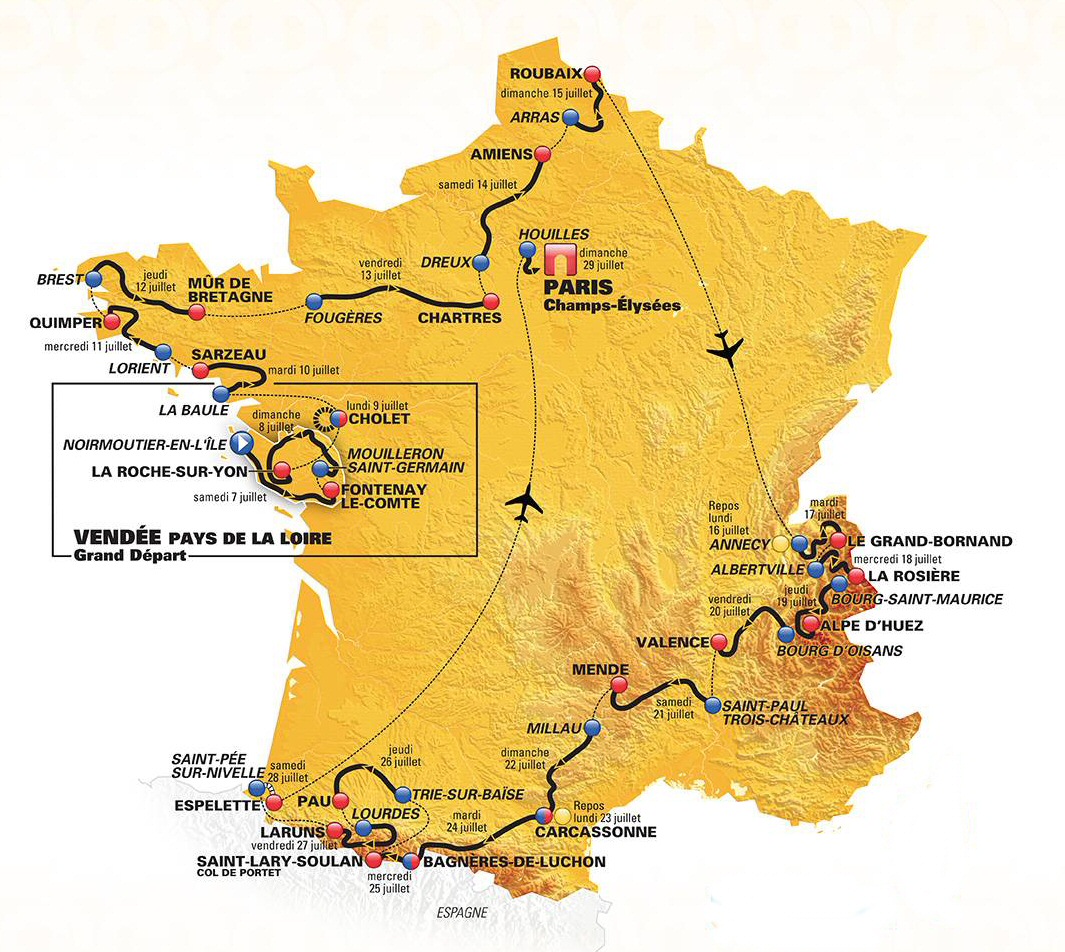