Is the Sonoran a good first Touring bike?

A few months ago I reviewed the VSF T50s Hybrid with the aim of seeing if it was a solid entry-level touring bike. In this review I've chosen to review a bike with similar aspirations from the Dawes stable – their Sonoran Hybrid. As with the VSF these bikes have been run as part of our fleet so comments are based on both my and customers comments and the experience of the hard life of a hire bike... Note that some pictures are from our fleet (and grubby after a ride!) and the colour is now a rather sexy matt black - if you want pretty pictures go to the Dawes website...

Along with the VSF T50s, the Sonoran fulfils my basic minimum specification for a touring bike (see the VFS T-50s review for my thoughts on this). It has a Freehub (the cheapest Dawes hybrid so equipped), a decent range of gears, a suitable frame and is equipped with a rack and mudguards. List price is at £550 - more than the VSF (£500) but unlike that bike it can often be found at a heavily discounted price especially late in the season.

Given the two bikes similar target market it's important that you read the review in conjunction with the original VSF review (saves a lot of repeating myself) because the two bikes do have some considerable differences. 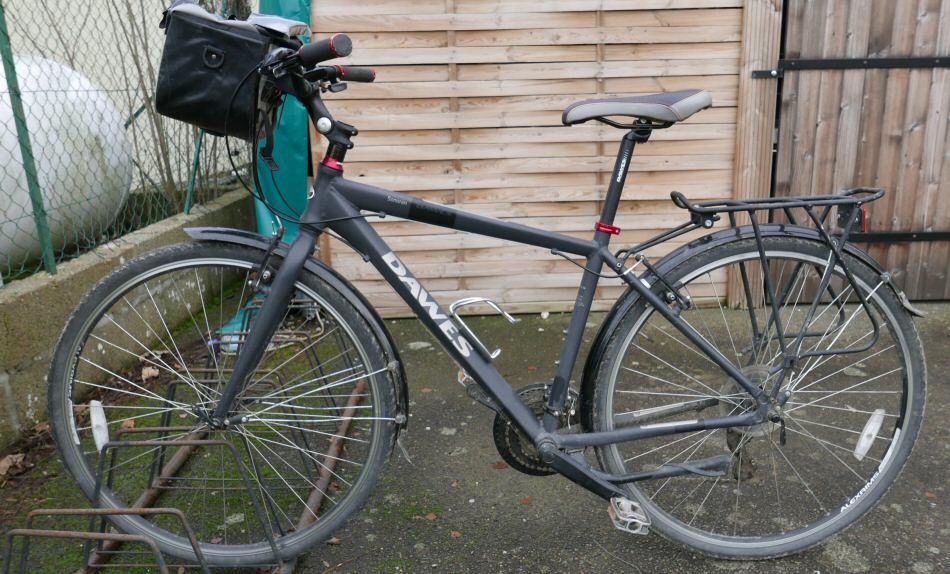 The Sonoran comes with all you need for a starter touring bike - decent mudguards and an Aluminium rack which though 'generic' is a little wider and with better pannier support to the one fitted to the VSF. Pedals are basic one-piece metal which in my experience are a good compromise as they don't fall apart like those with a separate cage, though fitting toe-clips isn't possible. No dynamo system means we have basic Shimano hubs with quick-release compared to the VSF's full hub-dynamo system which requires a spanner to change the wheel.

The bike is built around the Shimano Altus 24-speed groupset which is the minimum I'd trust for a tour and works as you'd expect, however as always I note that the top gear is suitable for time-trialling and the bottom not low enough for mortals carrying their home up hill. You'd think that with 24 gears we'd at least invite 'granny' to the party. 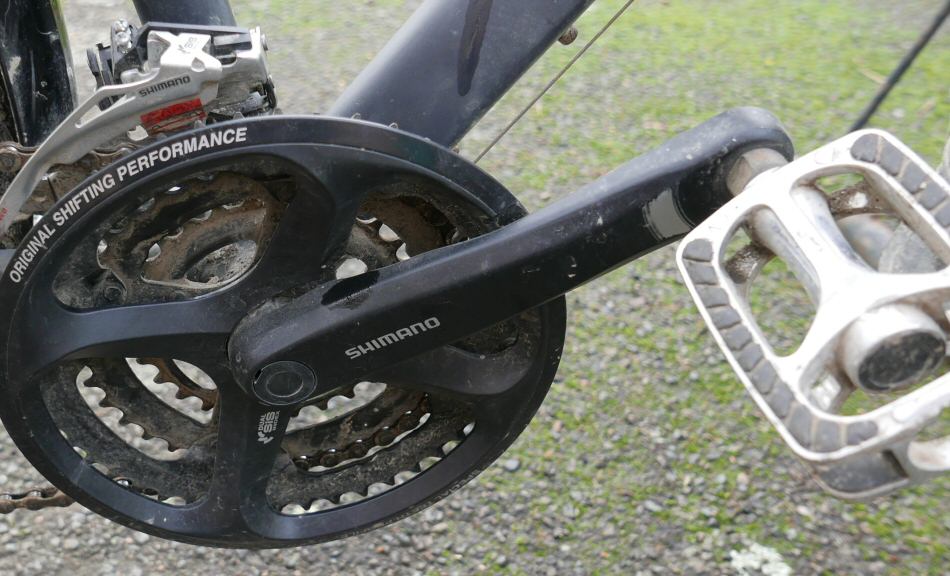 Unfortunately the brakes have been penny-pinched and are a fairly poor quality alloy V-brake which combined with spongy pads and generic cables results in less positive braking than the Altus on the VFS and draggy cables after a while. 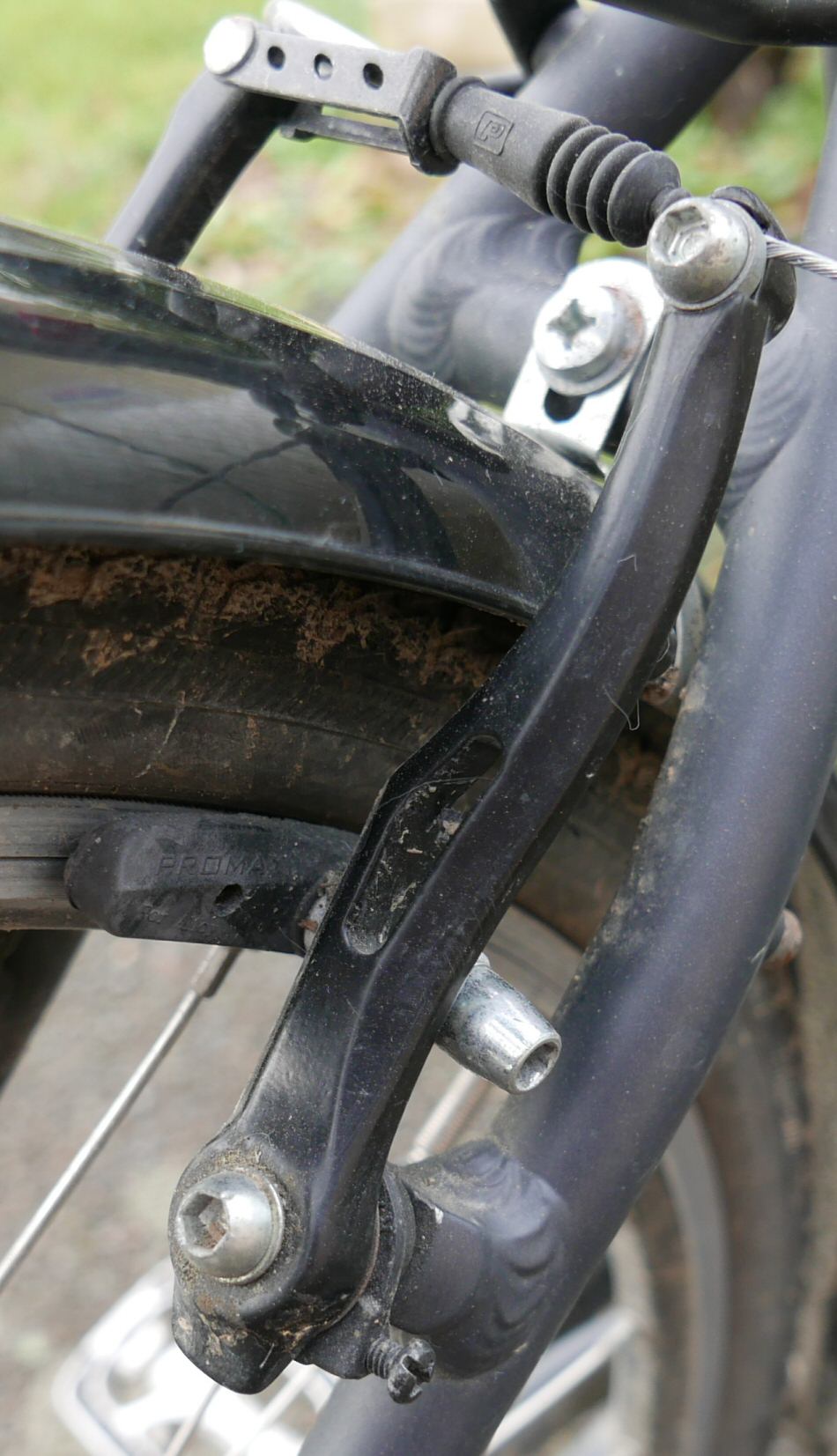 Saddle is a simple 'Dawes' branded affair and the finishing kit of seatpost, quill and handlebars of basic but acceptable quality. The Headset is by FSA and performs well. The quill is one of those adjustable types which means that the handlebars can be given considerable rise at the cost of shortening the bike and being a bit wobbly and creaky compared to a fixed quill - but that's what we pay to get adjustment since the adoption of aheadsets. There is a side-stand fitted that can balance an unloaded bike but is pretty useless/pointless/dangerous for loaded cycletouring. 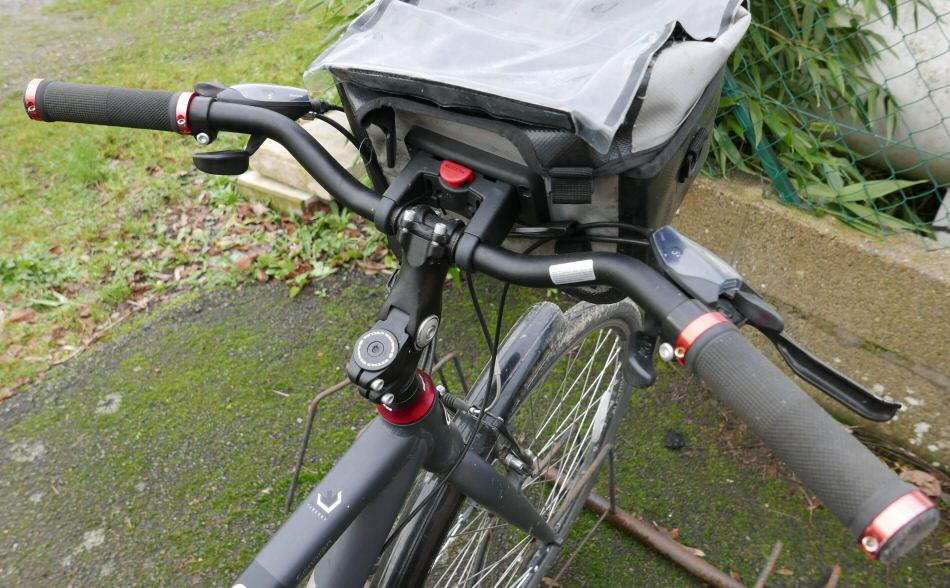 Dawes have finally stopped using Allen bolts made from cheese but they are still not of the quality used on the VSF.

As with the VSF not a lot to say – Basic 'Alex' rims laced with 36 spokes to Shimano hubs. The very bottom of the 'quality' ladder, a little below the VSF's Acera rear hub, but you'd be amazed how well they manage;-) Like the VSF Dawes have chosen Schwalbe 700x35c tyres – this time 'Roadcruisers' which seem almost identical to the 'Citizen' fitted to the VSF – I'm a great fan of such tyres, they roll well, wear slowly and are reasonably puncture resistant... 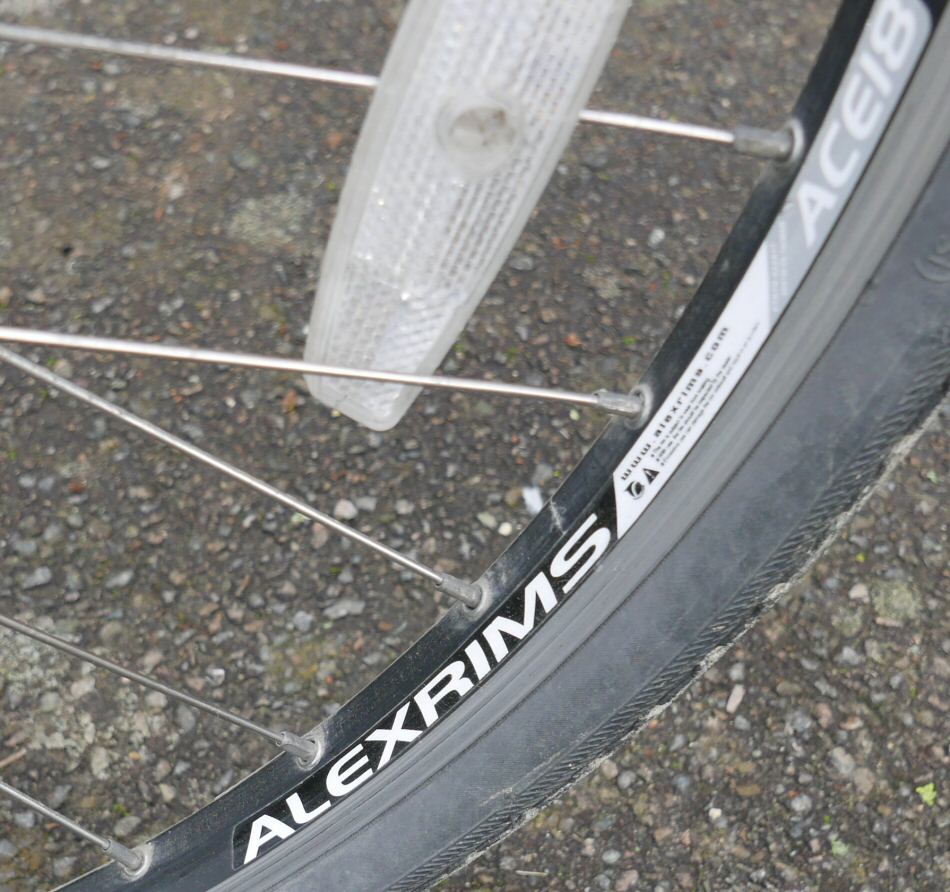 Here we see the biggest difference between the Sonoran and VSF T50s. The latter has an Aluminium frame, classic in looks (it looks like steel) with skinny tubes and supported by a CrMo fork. The Dawes uses one of their 'Hydroformed' Aluminium frames and a straight Aluminium fork. The overall design is very 'compact' with a steeply sloping top-tube and the diameters and shapes of the tubes varies all through the frame in order to reflect the stresses imposed at various points. It's a sophisticated use of the material which in theory should make for a lighter and yet stiffer frame. I'm not quite so sanguine about the straight fork nor the material it's made of. Personal prejudice I know, but Aluminium fatigues in a way CrMo doesn't and I always feel safer with a steel fork. CrMo can also be made to give more 'spring' and thus comfort, but it's interesting to note that VSF resort to Aluminium forks further up their range so what do I know? The frame also comes with three bottle-cage mounts against the VSF's one, the VSF countering with low-rider mounts, and the anodised finish, though less classy looking than the black paint on the VSF, is considerably more durable. 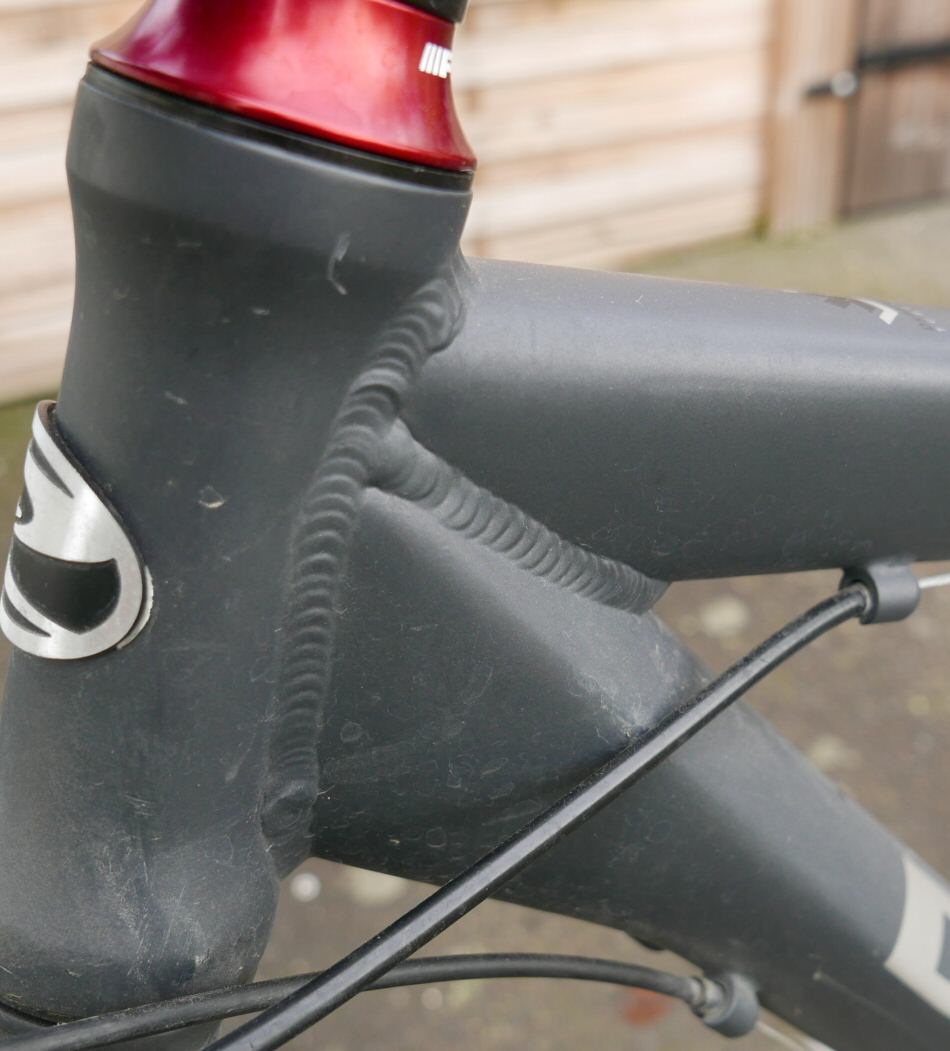 As already noted the choice of handlebars gives a sit-up-and-beg position, something increased by the overall shortness of the frame compared to the VSF and the use of a very soft 69 degree head and steep 75 degree seat angle. Again most leisure cyclists prefer this sort of approach to the more serious touring position of the VSF. And it's this riding position that really defines the difference between the two bikes – someone wanting a position like the one found on the Dawes will not be able to find it on the 50s. In a bike shop most customers will choose between the two on that one characteristic above all else.

But that would be to miss the actual riding difference between the two framesets. The VSF feels immensely stable, solid and exudes class. You really could kid yourself that you were riding something at twice the price. Steering is rock stable and yet the frame doesn't feel as 'dead' as some Aluminium frames I've tried.

The Sonoran on the other hand belies the rather 'Mrs Marple' riding position by feeling the lighter and most lively of the two (it is a kg lighter but that isn't the reason) but as you'd expect the pay-off is that though it's OK with a touring load it does lack the solidity of the VSF.

It was very interesting running several of both these bikes in our hire fleet back-to-back. People guessed that the VSF was considerably more expensive (though it is cheaper), but the majority preferred the Sonoran's riding position. The VSF was seen as the more 'serious' of the two but in the ladies version very few people chose it over the Sonoran.

As for reliability, the almost identical kit meant that reliability was similar, but the penny-pinching in brakes gave be grief as they needed more maintenance and I eventually ended up changing the cables and pads – even then they were never as good as the Shimano on the VSF's. The paint on the VFS was a little fragile – not so much chips and scratches but the inevitable daily scuffs dulling the high gloss finish. Wheels on both bikes stayed true and customers liked both.

Which leads me to sum-up with this... Here we have two touring-capable Hybrids for around £500 that though similar in spec are quite different to ride. That's great because it gives us choice. Personally if forced to choose I'd go for the VSF because of the classic look and the way that at no point do you feel like you've bought a cheap bike – the riding position is of course 100% personal.
The Dawes is nearly as good but suffers from one major disadvantage – price. The VSF is better finished, has better brakes and comes with a full dynamo lighting system. It looks as if it should be the more expensive of the two. The Dawes list price is over 10% more and I just don't see that as being justified. The fact that it is widely discounted redresses the balance, but I'd rather see the 'list' price being what most people pay rather than have to go round looking for discounts from on-line retailers. This sort of pricing policy cripples small bike shops who have to buy at 'full-trade' and when forced to discount to match on-line prices 20%+ below list end up with little profit – just a little hobby-horse of mine...

One point that you may or may not consider relevent. Dawes is a famous british name in Cycle manufacture. However though much is made of this on the Dawes website the Sonoran (like all Dawes cycles AFAIK) are manufactured, assembled and packed in the far east. 'British' input is design and distribution.