For those not familiar with these reviews I run a company doing cycling holidays in France called Breton Bikes. I generally only review equipment that I've bought several sets of and used in our hire fleet. Why? - Sample size. Just because you've bought an item and it fails badly doesn't mean that every other example isn't absolutely perfect – if you've had a great experience that too means little if loads of people have had something fail. In the case of the Carradice Carradry frontbags I bought 20 and used them in the hire fleet – what follows are my, and my customers views on how they performed... 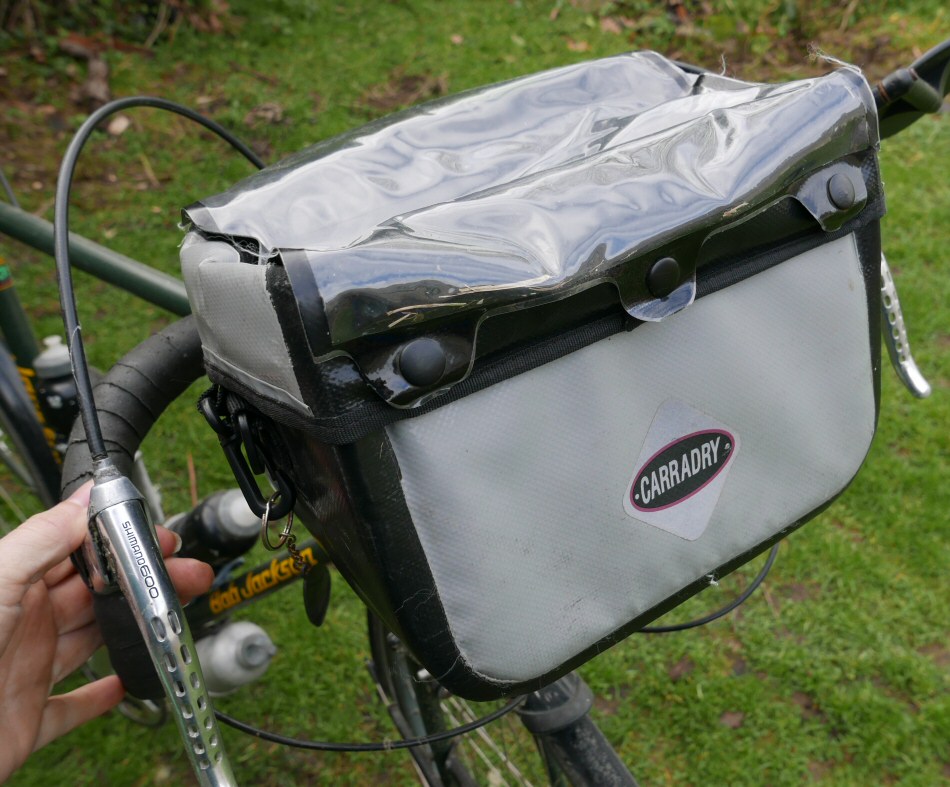 Carradice are a British company that have been making cyclebags for longer than any company in the world. I've dealt with them for 30 years – they are a responsive, friendly and IMHO great outfit and they have supplied almost all the panniers and bags that our company has used for the last 27 years. I can pick up the phone and talk to the manager (the same as 27 years ago), the bags are signed by the women that make them and they are a proud British company. So yes I like them, but that doesn't mean they are beyond criticism as we'll see...

Decent front-bags are seriously expensive – probably in most set-ups the single most expensive bag on a touring bike. I have tried many in our fleet and because customers need something waterproof to keep their cameras, money and passports (which you have to carry at all times in France) in I buy good ones.

When I saw the Carradry bags I though they looked ideal. Sitting near the top of the Carradice range they were 100% waterproof and I hoped as tough as all the other bags I'd had from them in the past.

The construction is'waterproof' because they use the same sort of welded lorry-tarp type material as that pioneered by Ortlieb. This is built around a carcass of folded corrugated plastic as with their other bags and gives a sturdy but lightweight build. At 9 ltr they are roomy and inside they have two zipped and two smaller interior pockets either side. The fitting is a KlickFix as used by many manufacturers and which is something of an industry standard. There's a map pocket poppered and velcro'd on top and two snap buckles fasten the lid down. Underneath is a detachable plastic fitting for lights. And that's pretty much it...

And here things were a bit mixed. The bags just had too many irritating flaws to really make me, or our customers like them.

OK – let's start with the good stuff. Yes they were waterproof, yes they were a decent size but in use? First off is my problem with all such 100% waterproof bags – they don't 'breathe' Now that might seem bonkers, but the trouble is that put anything damp in them and EVERYTHING then becomes damp – and as that's quite a likely occurrence (on a typical cycling tour for example;-) it means that in wet weather the inside is permanently slightly damp – it's the same with bags from people like Ortlieb and Vaude. This is a given but it's a problem compounded by Carradices use of a pale grey liner. One cold morning you get condensation and over a couple of weeks mould will take over and discolour the pale grey lining and pockets. In fact several of our front-bags had to be taken out of use because of the dark mould damage – it's harmless but looks crap and customers don't like it. A minor thing, but if the liner were black it wouldn't be an issue. And on the topic of colour, I know Carradice are a 'classic' conservative company and play on a traditional image, but pale grey plastic just looks a bit naff – grubby from the word 'go'. Personally either they need to be black, dark green/grey etc or perhaps better still, go for some hi-viz colour like yellow or orange. Not traditional, but then neither are the bags and it'd make them stand out on the road and in the shop – just my opinion. 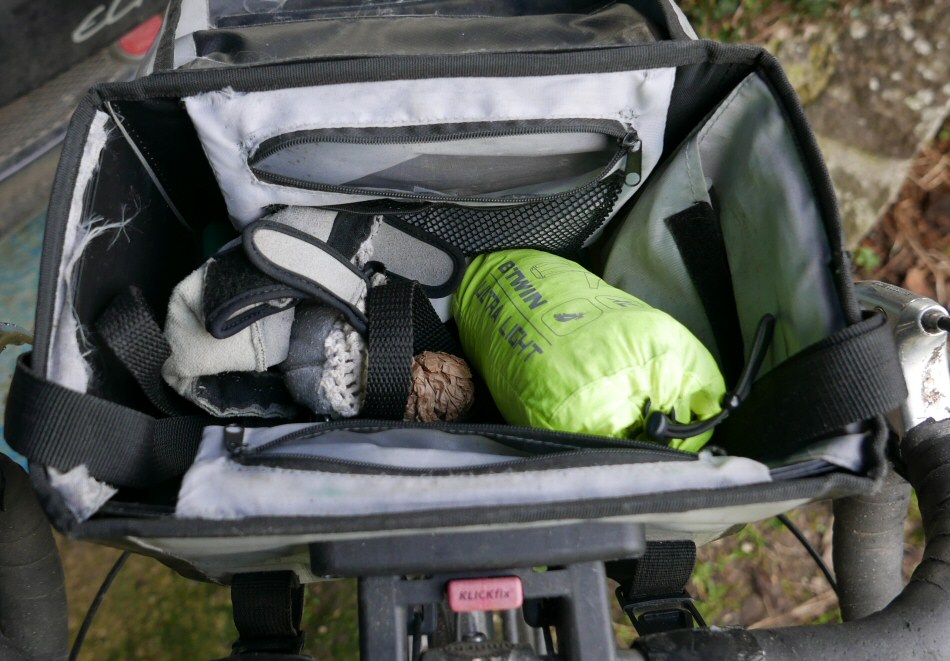 Second the clips for the lid – grrrr! Look at the pictures and you'll see that they are placed exactly between the bag body and the handlebar. That would be OK if they were the sort of buckle where you squeezed the sides like every other bag Carradice make as there's (just) room for your fingers. But Carradice have bizarrely chosen a clip that requires you to hold it between thumb and forefinger at right-angles to the handlebar. There just isn't room – it's almost impossible to unclip the top (especially with cold hands or gloves) and nearly as difficult to do up and requires two hands to do it properly. I tell customers that “ just pull the lid over the top of the bag and tuck it in and to forget the buckles – they are only there for when you take the bags of the bike” - which is the sort of 'bodge' explanation I hate having to give to customers. I can see no reason why this should be the system – on all other cycle bags made by the same company the clips require a simple squeeze from side-to-side – easy... This is a daily irritation and more than anything else spoils the design. 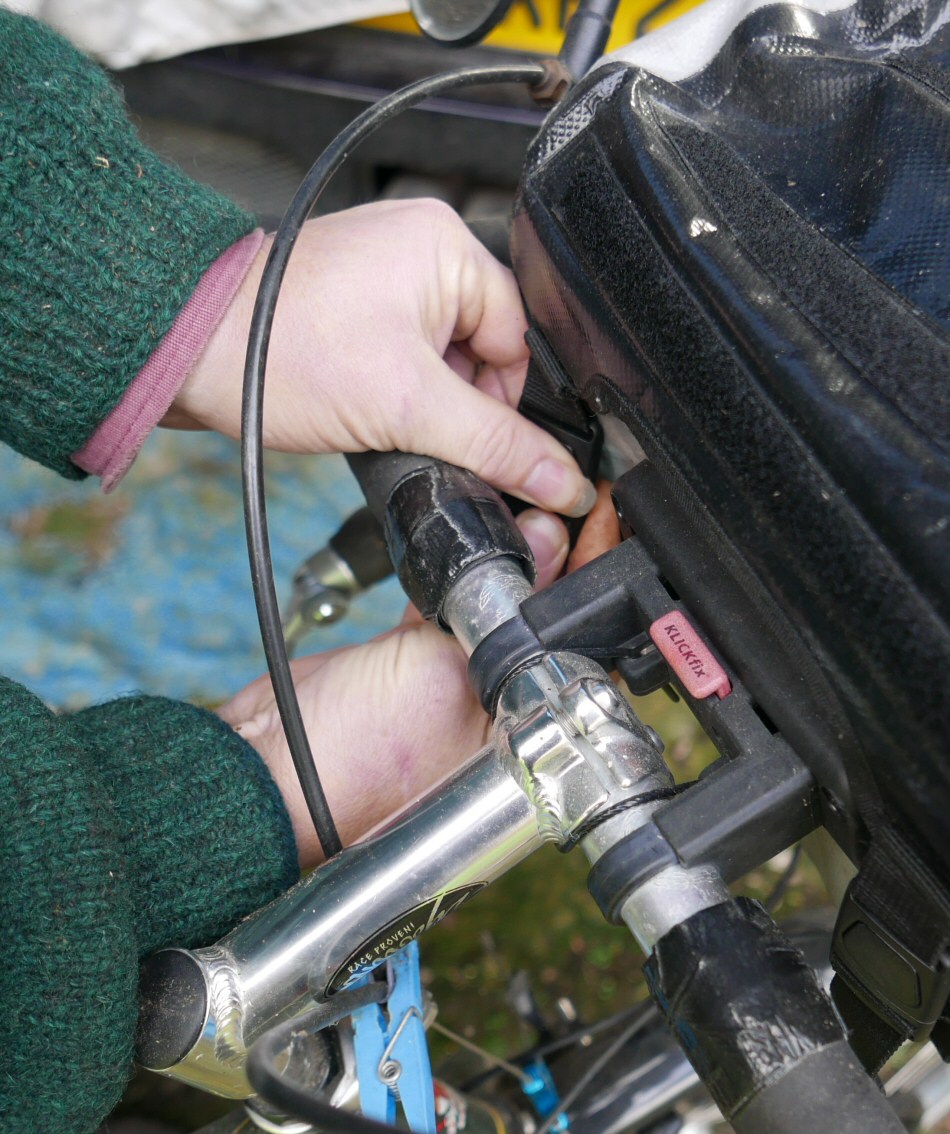 Then there's the map pocket. The first batch of bags has some made from what feels sort of 'medical' and rubbery plastic – they split within a week. Carradice replaced them all free of charge (they are that sort of company) with a new design, but combined with the clip issue it did make me wonder who had taken over product development as this is the sort of thing that should be picked up in a few days use... The replacement map pockets were far more robust, but a bitch to get a map into (especially French ones) and too small for many – the heavy-duty 'pop-studs' also need to be oiled to keep them working well as they can be very difficult to undo if left and risk tearing the pocket or pulling through the lid. Again the folded one on their other bar-bags are perfect for the job (and 99.9% waterproof) so just why? Perhaps it's the goal of a totally waterproof pocket, if so your map gets wet in the rain because it's such a struggle to get it out, turn it over and cram it back in again. 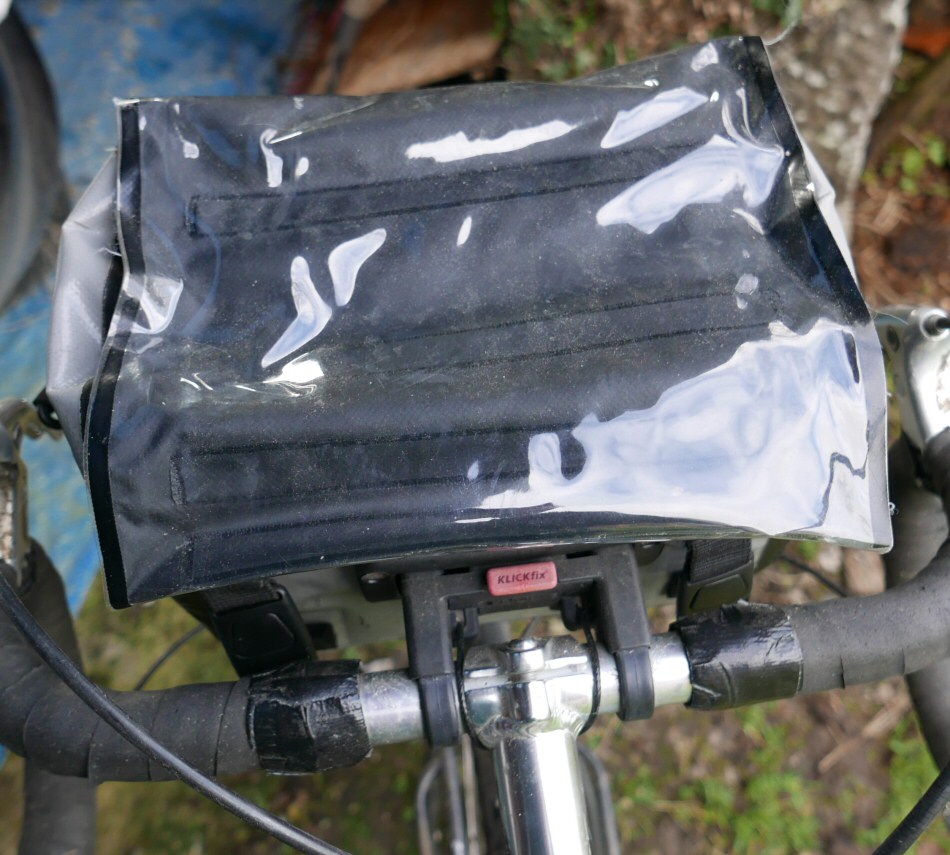 Fitting? As I've said 'this is industry standard', but it has one flaw for my use. The bar attachment is clamped as usual and it uses a wire looped over the stem to offer support. This wire is adjusted and anchored by hexagonal fittings in the plastic. All well-and-good but if you do these up tight, when you come to undo them, the hex fitting rotates, strips the plastic and you can't unclamp the wire. i.e. it's very difficult to adjust the position or change the bag to another bike – especially if after 6 months it's all got a bit corroded and stiff. This of course applies to all companies using this fitting, but it's still a flaw.

And lastly build quality. You have no idea how much it pains me to say it, but for the first time I was really disappointed. Several of the bags had the stitching on the front zip-pocket fail (or just miss the material?). In our hire use I ended up just cutting pockets out (which solved the mould problem too) – but this shouldn't happen. Carradice also seem to have developed a rivet problem. Several of the bags had rivets fail where the plastic mount attaches to the bag and those holding the map-pocket studs on. This rivet failure also happened on almost all the panniers I received from Carradice (I had a batch of 60 pairs made) at the same time – I've never had this before and I suspect that either a rivet gun has gone out of spec, or the rivet supplier has changed something, but this is a major weakness... I note from pics on their website that Carradice may have replaced them with bolts on the front-bag mount in which case they are on to the problem...

At £50 the Carradry isn't the most expensive of the breed but it's not cheap. As it stands it's potentially a very good bag let down by details – the design hasn't been worked out properly and the quality control has failed somewhere. - a real shame as it would be just as easy to get it right. Hopefully Carradice will work this one out because it's not far from being an excellent bag.

Since these problems I got Carradice to make me a batch of Super-C frontbags made from thick black Nylon as used in the panniers they make for us. These front-bags are the best I've ever used and when given the choice our customers choose them without exception over the Carradry. The only snag is that the general public can't buy them – personally I think Carradice are missing a trick...