You are here: Home » Home » Cycling Article Blog » Be safe – Be seen... How not to spoil your cycling holiday.

Be safe – Be seen... How not to spoil your cycling holiday. 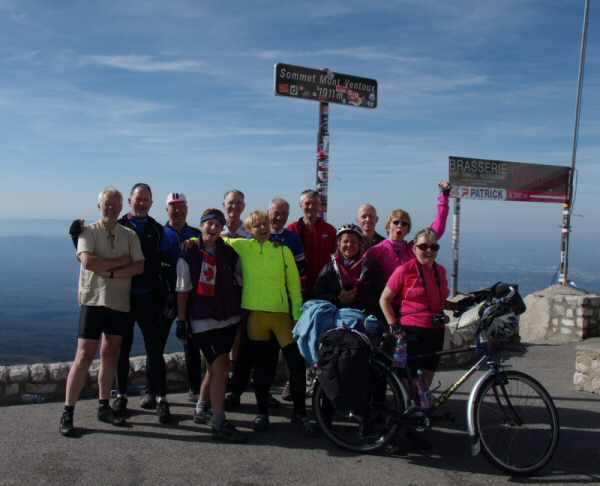 Cycling and Hi-Viz – how I became a convert.

Wearing a helmet when riding a bike can be a good idea, and because our cycling holiday customers are riding unfamiliar bikes in a foreign country (France) and perhaps for the first time in their lives riding a bike with any sort of load on it, we do recommend people wear helmets because they are more likely to fall off;-) But the helmet issue is by no means clear-cut, research has shown that drivers give helmeted riders less space*, that riders in helmets tend, on average to take more risks*2 and so-on. The result being that where helmets have been made compulsory there hasn't been the expected fall in cycling fatalities.

The result is that few countries have followed Australia's lead in making them compulsory, and so legislation for cyclists has remained much as before. Most countries insist on lights at night (a good thing), many a bell (rather bizarre when the rider has a voice capable of 90+dbl...), but other that that we are thankfully generally left alone.

But recently France has introduced a rather interesting piece of legislation. If you are riding outside built-up areas, in poor visibility, then you must wear a hi-viz jacket or similar.

Now this is such a typically French piece of law making it makes me smile – it's so utterly vague as to be meaningless - what's a built-up area? Does it mean where there's no street lights? What counts as 'poor' visibility? (rain/fog?) and so on - but its intention (as with so much law in France) is more to make people think about what they wear on a bike and in what situations, than actually lead to prosecutions.

I'd rather put this down to the French 'nanny state' and treated it with some derision. But my wife, Kate had a more thoughtful attitude and concluded that for her it seemed a good idea. The legislation came partly as a result of a recent law requiring car drivers to carry a hi-viz jacket in their cars in case of breakdowns – seeing how effective these were (and how obviously vulnerable people not wearing them were) prompted her to start wearing one.

And of course she then started hassling me about how difficult I was to see (in my cool, all-black cycling gear and panniers) when up the road in front of her. Then riding in a group I suddenly saw how much she stood out from the other cyclists.

So in the end I cracked and bought a rather nice fluorescent lime-green pertex jacket to keep her happy.

Wind on to October 2013 and Kate and I are cycletouring in the Creuse area of France. The roads are generally quiet (it's rural France after all), but it's wooded, late in the year, overcast and so pretty dark all the time. I lived in that jacket I can tell you, and found that I felt naked without it.

In France drivers are generally very careful with cyclists, but I am convinced that wearing that jacket they gave me more room and time than usual – and not a little, a lot – it was quite striking...

So what is going on? I've already alluded to the research showing drivers passing closer to cyclists wearing helmets (8.5 cm closer on average). The same study found that when the researcher wore a blond wig (and so was obviously 'female', and thus even more vulnerable) the distance increased by 14 cms! This shows how easy it is to alter driver behavior. Of course the cyclist is much easier to 'see' but I am convinced there is more to it than that. My theory is that when a driver sees a cyclist in a hi-viz jacket his/her first reaction isn't 'cyclist', but 'danger' – such colours always mean an alert of some kind - and this alters all their subsequent interaction with the cyclist, it puts them on the 'back foot' as it were.

To illustrate the point just look at the picture above - taken in bright sunlight. Which person stands out? Imagine a bright sunny day when riders are going in and out of the shadows of trees - who will be spotted? I doesn't need to be 'poor' visibility to make that difference...

Whatever the reality of this is (and I hope someone will do a definitive study) I am convinced that wearing bright warning colours has major safety advantages even when visibility is NOT particularly bad. More to the point, apart from the fashion-crime aspect, there is no disadvantage to wearing such colours. Hi-viz waistcoats are very cheap in France and elsewhere because of their mass production for motorists, but just make sure your waterproof, windbreaker or cycling shirt is in those colours and you will gain the full benefit without any extra burden or discomfort. And because (unlike helmets) the shirt doesn't offer any intrinsic protection I don't feel that I take any more risks when dressed in hi-viz, whereas I am well aware that I do things when I'm wearing a helmet that I wouldn't do if I were bare-headed.

So for me the case is proven. From now on, on almost every cycle ride I shine out brightly from the crowd in my shiny green top;-)

Note – I am not putting a case for any compulsion, because of course all these arguments also apply to pedestrians – especially walking where there is no pavement...