You are here: Home » Home » Cycling Article Blog » Cycling in France - The Death of the Drop Handlebar

Cycling in France - The Death of the Drop Handlebar

Or: Why do I see so few cycletourists using 'proper' handlebars.

28 years ago we set up Breton Bikes to offer cycling holidays in France, primarily because we wanted to offer others the same sort of holiday that we'd enjoyed ourselves. Of course that meant using equipment very like we used ourselves and as our own bikes were classic, drop-handlebar'd tourers of course that's what we offered. We also offered some converted mountainbikes (this 28 years ago so pre-hybrid) for those that didn't want the drop-handlebars. Most weeks the Tourers would be the most popular by a small margin.

We hope you enjoy reading this short article and will go on to read many more. This website exists both as an information hub for cyclists – (and we offer free advice by email) - but also as a commercial site to sell our cycling holidays in France. For 29 years we've been the only company in the world offering fully equipped cycle camping holidays and now also offer hotel based cycling holidays and even run our local campsite which is uniquely well geared up for passing cycletourists - it is this experience that informs so much of what I write here.

Google is now punishing sites with high 'bounce' rates and also sees these articles as being nothing to do with cycling in France. That means if you read one page and then leave Google marks us down. If you don't click on one of the cycling holidays links in italics here Google sees this as a 'technical' site only. So please, when you've finished reading just click on any other link on the site before leaving - it would be a big help - otherwise I may be forced to remove such articles from the site and that would be a shame... 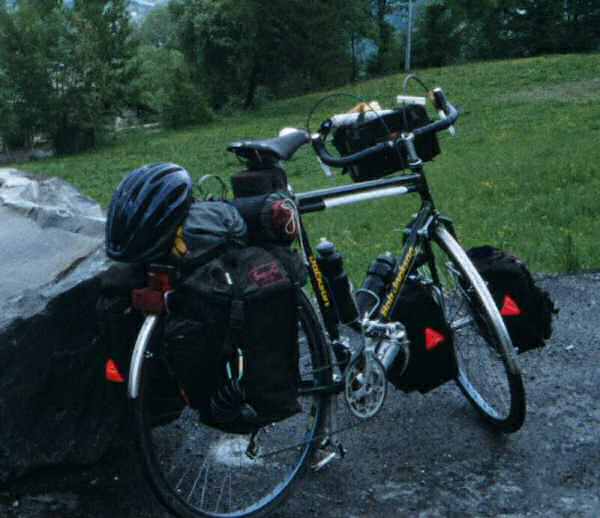 In the following 25 seasons that balance has slowly but inexorably shifted to the point that this week (27/07/2014) we have 50 customers and not one drop-handlebar'd bike is going out – the same for next week. So what's going on?

For nearly 100 years anyone doing 'serious' road cycling* – as opposed to just hopping to the shops – would use drop handlebars and now it's all changing – so I've decided to have a long hard look at the whole subject.

So what are the advantages of 'drops'? In essence there are just two. The first is aero – because they are generally narrower than 'straight' bars then frontal area is lower – of course going down 'on the drops' both reduces further your frontal area but also by flattening your back you gain a much more aerodynamic shape. With the relatively low power of a human this makes a big difference – especially as you go further and faster. If you're just pottering about then this isn't going to be so significant, but when riding fast or into a headwind the advantage is considerable.

This is why until relatively recently (with advent of aero bars etc) such bars were universal in road and track competition.

The other advantage is the wide range of positions available – holding the flat horizontal bar has your hands close together and an upright position, then you can move out to the bend nearest you, or move forward to hold onto the brake hoods and finally the drop part of the bar itself.

This is important because after a while you 'cycle' through the positions – every couple of minutes changing so that your hands don't get sore in one position. Different positions also offer advantages, most people climb hard when holding onto the brake hoods, use the top when cruising and the curve when looking for the most comfort – the drop comes into its own when you are really pushing hard or into the wind.

So that's great – on the other hand it's not all good news. No matter what technique you use you are always going to find braking more difficult. Modern cables and brakes have improved this a lot as brakes need so much less pull, but flat bars are always going to be at an advantage.

Secondly; especially on a loaded touring bike, you find you have less leverage to control the bike – particularly at low speed. This is something that comes with practice of course but it's there after all – rough and muddy cyclepaths being notably hard work on drops...

In contrast the range of alternatives to 'drops' has grown exponentially over the last 20 years. Now we have 'butterfly' bars, bar-ends and handlebars with built-in bar ends and so on. For me the critical characteristic of all these is that they should have a range of hand positions and one of them should allow rotation of the wrist away from the 'straight-bar' position – suddenly the crucial advantage of 'drop-bars' has gone – many others will do that job, though as always here we're very much into personal preference and the truth is that many people now grow up with bars other than traditional 'drops', especially on mountainbikes and hybrids and so the alternatives seem far more natural.

The one undeniable disadvantage of 'drops' for a cycletouring bike is that the industry doesn't cater for them... A touring bike needs powerful brakes – generally either discs or V-Brakes and these require a different cable pull to the caliper brakes used on racing bikes. There are a very few available, but the choice is limited to one from Tektro, one from Dia-comp and one or two combined levers from Shimano.

Combined levers are IMHO not suitable for extended, loaded touring. The disadvatages are many, but biggest is that they are vulnerable to a loaded bike toppling over or minor fall which will smash the gear mechanism. They are also difficult to keep lubed (and exposed to the elements) in a way that MTB combined levers are not – blame the crazy fashion for aero cable-runs for that, something that applies to all V-brake compatible levers.

That leaves you hunting down Dura-Ace bar-end gearchangers or Sunrace downtube levers – throwbacks to the 1980's and non the worse for that but hardly mainstream.

With a pair of butterfly bars you get reliable, easily maintained brake levers, full braking power on the 'tops' and a wide range of handlebar positions.

So now we have a public, brought up in an era where flat-bars on MTB's dominate, who see no reason to switch to drop-handlebars; and to be honest I can't blame them.

So why do I stick with drop bars for my own touring bike?

Well I guess I'm old-fashioned and live the look of the things, but beyond that the curve at the corner of the bar slopes downwards and personally I find that the most comfortable bar position – on all other bars it's either flat, or curves upwards... I did experiment with cutting off the ends of the handlebars and inverting them, and the result was quite good but I eventually reverted to the classic look. And then there's that rare moment, when either I've a howling headwind, or I imagine I'm Bradley Wiggins and tuck down onto the bottom of the 'drop'.

Who am I kidding?

*As has been pointed out to me - this almost universal use of drop handebars for touring is very much an anglophile tradition and in many countries (germany being a prime example) few people have ever taken to drops for anything other than competition.