The Chain-link Extractor – the ultimate multitool

Or - how one tool can save your cycling holiday...

Help! my chain has broken! 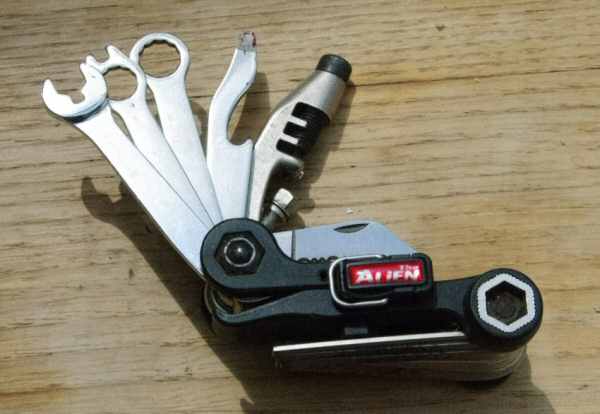 In the former category there are things like broken cables, punctures and bits working loose. Even these though need a certain foresight and basic tools to fix. But to be honest to go cycletouring without the ability and equipment to fix a puncture or a set of Allen keys is to invite disaster.

The second category are inevitably more serious as they require more specialist equipment and knowledge to fix and can range from broken axles to a split in a tyre. On a major expedition in the wilds these sorts of failures can be extremely serious and even on a weekend away can ruin a holiday.

But here is where experience and very basic knowledge can come to the rescue and turn the breakages that stop you into something you can limp with and continue. In a future article I'll pass on my knowledge of these 'get-you-home' bodges, but one tool, small and easily used is capable of fixing several of these problems and is essential even on a day-ride if you want to call yourself a cyclist, and that is a chain-rivet extractor or chain breaker.

A broken chain is one of those failures that simply stops you cycling. It's also – after punctures and tyre failure – the most common breakdown. Generally all that happens is that one of the side plates of a chain comes away from the rivet supporting it and the chain fails at that point. There is no way to bodge this without a chain-breaker. As the failed link is damaged you just use the extractor remove the link entirely – thus shortening the chain by about 3 cms. Once done you carry on as if nothing had happened. The only slight downside is that such shortening needs you to avoid using the largest sprocket and the largest chainweel (i.e. cross-chaining) but as you shouldn't do this anyway it's no hardship. On a tour I generally carry a couple of spare links so that the chain will be as good as new, but just taking out a link will do the job.

It's that ability to break and reconnect a chain, and especially the ability to change the length of the chain by removing several links that makes the seemingly catastrophic failure little more an an inconvenience.

So – let's look at the other mission-critical failures that the chain-breaker will 'bodge'. The first is that not uncommon problem of a rear derailleur being dragged into the spokes and getting smashed – either because of poor adjustment or picking up a stick or being bent by clumsy handling.

In this scenario the derailleur is scrap and has to be removed – something which in itself requires the chain to be broken. What you do then it turn your bike into a single-speed conveyance... Wrap the chain around one of the middle sprockets – say gear 4 or 5 on an 8-speed, then around the middle chainring (on a triple – small chainring on a double) and use the breaker to joint the chain so that it is as tight as possible (inevitably there will be some slack) around those two. Voila! An instant single-speed bike. Now it's obviously not ideal, but this will produce a single speed bike with a decent middling gear that will get you to where you want to go – and that is the important thing!

The other major failure that the breaker will fix is again quite a common failure, but in this case you are into black-belt bodging – I'm talking about freewheel failure.

This is a biggie. It's when your freewheel spins both ways like a car in neutral and you cannot get any drive. Of course now the derailleur is useless. To bodge this, in addition to your breaker you need some pliers/wire cutters and some solid steel wire – a bit of fencing wire is fine. Now these aren't things most people carry (though I carry a Leatherman which with a quick snip of a farmers fence does the job!) but most households will.

It's a bitch of a job, but what you need to do is pass loops of wire through the holes in the biggest rear sprocket and twist them round spokes, preferably where they cross. This will take a loooong time – maybe an hour, but it's the only solution. The more twists the better because you are going to ask the wire and spokes to take the strain of you pedalling. Beefy plastic Zip ties are also surprisingly good at this if there are enough and even easier to fit.

Once done the result is an old-fashioned fixed-wheel, i.e. no freewheel so that you have to pedal all the time - up hill and down dale. Of course with the derailleur attached this is impossible as the chain will simply drag the derailleur up into the wheel so you must bypass the derailleur using the method described above. Inevitably this results in a fragile repair so pedal as gently as possible and smoothly – it isn't going to last forever but it may just get you home...

Using a chain rivet tool is something you can learn in minutes, but it's not something I intend to cover here as there are lots of videos on the web making it clear

Many multitools, even those like a glorified penknife with allen keys will have a basic chain-breaker.

Learn how to use it!