All our camping customers are supplied with a Trangia cook-set, why do we choose these instead of the various alternatives? 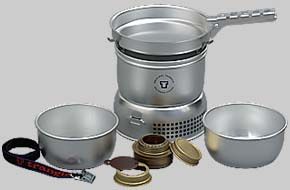 The Trangia is one of those great 'classic' bits of camping kit. In a world full of sophisticated gas/petrol/paraffin stoves, the meths-fuelled Trangia remains the single most common stove in use by campers today. Designed over 50 years ago it is simplicity itself and that is part of it's enduring popularity.

First lets look at the alternatives.

1 - Gas. Gas is clean, doesn't smell, lights easily is controllable and powerful, so why not that? The first problem is also the most fundamental; there are many different canisters out there, each with a unique fitting and often with different Butane or Propane mixes. They are not compatible so arriving at your holiday destination you may well find that the gas can you need is not available. Even if it is available it's not something you can pick up in a supermarket, but often requires a specialist shop and even in the most developed country that's a pain in the neck. That means that you need to guess how many canisters you need for a given holiday, and then carry all of them with you (not on an aircraft of course...). Sometimes when I'm going out for a weekend I carry a tiny gas stove, but to be honest a Trangia would do the job. On top of that the canisters are the most expensive stove fuel you can buy.

The second reason is more personal. Those gas canisters are an environmental disaster. I hate to think how much energy is needed to produce them and once used they just end up in a landfill unless you can find a recycling point. When you get home you'll find you have a half-full canister; do you save it for re-use, knowing that it won't last a weekend, or do you bin it?

2 - Paraffin/petrol and white fuel pressure stoves. These are very powerful, often have a built in tank that will hold enough fuel for a week and especially if you choose one that can take any of the above fuels you are unlikely to be unable to buy fuel, and that fuel is relatively cheap.

But for me they have disadvantages that mean that I've never invested in one. First off is that they are 'dirty'. Both paraffin and lead-free petrol (and to a lesser extent white fuel) stink. They are also oily and so any spillage on you, or clothes will leave you smelling like a petrol station. I know you can be careful and avoid this, but in the campsite environment it's just too much like hard work and colleagues using such stoves always have a particular odour:-)

Running such a stove also requires a certain amount of skill and maintenance to avoid flaring and sooty burning and they are relatively fragile. Dropping a stove onto a hard floor (e.g. slips out when you are packing panniers) can render it inoperable. And lastly I simply don't trust them. You have an explosive fuel at high pressure and mistakes can be very dangerous. A spillage of fuel on a flame can have catastrophic results and for that reason over all others I don't use them. Yes paraffin is the best in this respect but the smell makes me sick...

So that brings us to the Trangia. There are many cheap copies that work in a similar way, but few are as good, and though cheaper you've got to ask yourself whether saving a tiny amount is worth it when the thing isn't expensive in the first place and is likely to outlast you...

The principle is simple. A small burner has a hidden wick spiralled around inside. This burner is filled with methylated spirit and lit. The heat produced heats your food. What makes the Trangia so clever is that the burner is placed in a windshield/potholder assembly that not only makes it immune from winds (actually works better in a wind!), but acts as a chimney, drawing air up past the burner, holding heated air around the cooking pot, and then exiting it after curving round and out under the pot lid. Normally Meths burners are pretty pathetic heat-wise, but this drawing effect means that though not the fastest stove on the market, it certainly isn't too slow. More than that, because the fuel is so cheap and available at any supermarket you are encouraged to do 'proper' cooking.

The Trangia cook-set might seem heavy compared to a gas burner, but when you consider that it includes two 1 ltr pans and a frying-pan, a windshield, and if you choose the 27K - the neatest camping kettle on the planet, that weight suddenly looks rather reasonable.

As mentioned above, the fuel is available practically anywhere outside the Muslim world, but just as important, it is totally clean. Though it sometimes has perfume or dye added (to discourage drinking!) it leaves no nasty smell and you can even use it to wash oil off your hands or as an antiseptic. Of course, as with any fuel it can burn you, but it does burn 'cool' and is easy to smother or even wipe off, it doesn't 'explode' like petrol either.

The Trangia has the advantage for a long-distance camper of being indestructible. Some of the ones we hire out are 20 years old, have had a very hard life, and yet work like new. There is nothing to go wrong - throw them over a cliff and collect the bits at the bottom and cook your dinner. For me, and most cycletourists, we value something that works over any flash alternative...

Disadvantages? Well nothing is perfect. The meths can be hard to light if it gets very cold (not a problem on summer holidays) and so the burner needs heating for a few seconds with a lighter. Getting used to controlling the flame using the crude simmer-ring takes a few minutes to learn, but I happily let my 12-year-old cook on it, not something I'd do with a petrol stove. The fuel can blacken pans depending on how pure it is, and what additives are used in the country you bought it to stop drunks from drinking it. A mix of 10% water helps this a lot and doesn't adversely effect the cooker and anyway you can always scrub it off when you wash up...

Otherwise a Trangia will become a solid and dependable friend and you'll wonder how you ever thought to use anything else.

Footnote... Trangia do make a gas adapter for the Trangia. Don't waste your money, apart from being expensive and having all the disadvantages of gas stoves mentioned above, it also doesn't seem to work as well in the windshield, burning food at the centre of the pot rather than heating evenly...