You are here: Home » Home » Cycling Article Blog » "A DAY IN THE MOUNTAINS"

"A DAY IN THE MOUNTAINS"

Kate and I's first ever mountain... 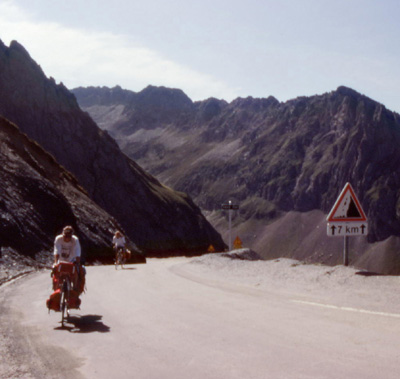 Every cyclist has a "The best day ever" in their catalogue of cycling memories. The day may be chosen for views, people they’ve met, a special achievement or even overcoming adversity. This is our best day - why? I can’t rightly tell, maybe a combination of all the above, but I know we will never forget our first day "in the mountains".

Kate was about 15 metres ahead, hair streaming, knees and elbows tucked in. A quick glance at the speedo shows 35 mph. Then braking hard for a hairpin, brakes squealing then cranking the bike hard over, further and further, nothing scrapes, then upright again. The road dropping steeply away, 1 in 5 at a guess. Ahead of me Kate tucks down and lets out a whoop of excitement. 35, 40 , 43, I wear glasses but my eyes are streaming, Kate is a watery blur ahead, 46, 48, can I make 50? The bike gently shakes its head as if in answer and I sit up and let Kate go. 20 minutes of wild descent has made us confident in our brakes and tyres, but I have front panniers and, I suspect, a healthier sense of danger. I catch her up 5 minutes later as the hill gently flattens, her hair a mess and a huge grin on her face. "Brilliant!", she shouts, and we pull up at the side of the road and catch our breath. Our rims are too hot to touch and the tarmac is melting under the searing Spanish sun, but we are both cold. Now I know why the riders on 'The Tour de France' stuff newspapers up their shirts.

The day had started gently, a soft cool day in the little town of Arrette where we had camped the night after a huge meal in the hotel in the town. We were nervous - all the last day we had watched the mountains getting larger and larger, dominating the horizon half way to he clouds. The first time I had seen real mountains, I’d been walking in Snowdonia in Wales, but these were giants. We were at 150 meters, the top of Col Pierre-St. Martin pass was 1800 meters, a climb of over 5000 feet, with little idea of what we would find on the other side - in Spain.

We had chosen this pass back in England six months before, as part of the planning for our longest ever tour. 1400 kms of hard cycling later we faced our biggest test. The two weeks it had taken us to get to this point had hardened us up and a glance at the map all those months before had shown us that the climb lasted for 25 kms, presumably giving a quite manageable gradient of 1 in 15. So, we shook the early morning dew from the tent, packed our panniers and set off as the sun rose.

How wrong can you be! We soon picked up speed and instead of starting to climb we found ourselves cycling along a steep sided valley. 5 then 10 kms and still we didn’t climb. The mountains seemed to be wrapping all around us, blotting out the sun.

Then a little bridge, through a tiny copse of trees, a quick right hand bend and then we saw it. Like Jacob’s ladder, the road soared up in front of us doing a passable impression of the side of a pyramid. Neither of us said anything, there was a series of clatters as we both hit bottom gear and we began to climb. I will never forget those first 400 yards, all I could see was the tarmac directly below me as I "honked" in first gear. I could see the veins in my eyeballs but blowed if I was giving up now. I could hardly believe it, but the road actually steepened around an outcrop of rock, then turned and levelled out slightly. I stopped, shaking and gasping for breath, turned round and was stunned to see Kate grinding up the hill not 20 meters behind me. She stopped and I grabbed a quick snap of her. I have that photograph in front of me now, it is a picture of exhaustion and despair. After she had gained enough breath she gasped, "Its no good, I’ll never make it".

This was our nightmare, all this way and to fall at the first major hurdle. Were we going to have to freewheel back with our tail between our legs and find some easier way into Spain, ie a bus? We rested for five minutes, had a cuddle, and I confessed that I was exhausted too. We could only see a few hundred meters further up the road as it wound its way up the mountain, but the gradient was certainly a little less, "Lets give it a go" said Kate and so we swung our legs over our saddles and began to climb.

That easier slope made all the difference, and our super low bottom gears allowed us to settle into a gentle rhythm with enough breath left over to talk to each other. Some thoughtful soul had painted lines across the road every km, presumably for some insane cycle race, and had also marked the altitude. So as we climbed we had a good idea of how far we had got, and this helped us pace ourselves.

Soon we left the treeline behind and saw the mountain stretching ahead. Sheep grazed on the rough pasture in the distance - "wait a minute - they’re not sheep they’re cows!", suddenly the scale changed and the mountain looked twice as big. I could hear the gentle clanking of their bells echoing across the valley. Why were they clanking in time to my pedalling? It wasn’t cow bells, it was my spokes making pinging noises as I pressed on the pedals! A quick inspection showed nothing amiss, but I listened with one ear for the snap of a spoke for the rest of the climb.

Every couple of kms we stopped, had a rest and gazed speechless at the scenery spreading before us. "There’s a chough, and another!" These little crows pirouetted in front of us as if giving us our own personal aerobatic display. The top of the mountain was lost in the clouds, and below us we could see the tiny meandering road we had climbed up.

Time to press on. The soft wet clouds engulfed us for a few hundred meters then we emerged into brilliant sunshine, the top of the mountain invisible behind the slope. "Nearly there", a helpful km line told us - we had only 800 metres to climb.

Round a hairpin, then there it was! The most ugly half built ski resort you have ever seen, music blared from tinny speakers and a bar looking like an office block advertised "steak frits". We could have wept. No mention on the map, it was too new. So this was to be the summit, literally, of the days achievement. We succumbed and sat and munched our dinner with an ice cold beer, we were the only diners. What else would you expect at a ski resort in August?

The food revived us and there was a little further to the summit, so we mounted our steeds and wound our way from the monstrosity behind us. After 500 meters it was as if the ski resort had been swept from the face of the Earth, we were at the top, that thrilling descent to come. Behind us spread the green mountains of France, ahead of us the Spanish border, marked by a tatty wooden barrier and diligently "manned" by a very bored looking cow, not a human in sight. Beyond that, Spain, baked hard brown, tiny dark villages, and many more passes in the Cantabrian mountains, but for now we were happy after our first day ‘in the mountains’...