I have in my posession an 1887 copy of the Badminton Library's 'Cycling' book. This is a substantial volume covering all aspects of cycling at that time and is utterly fascinating- both to see the changes that have taken place and the things that have stayed the same. 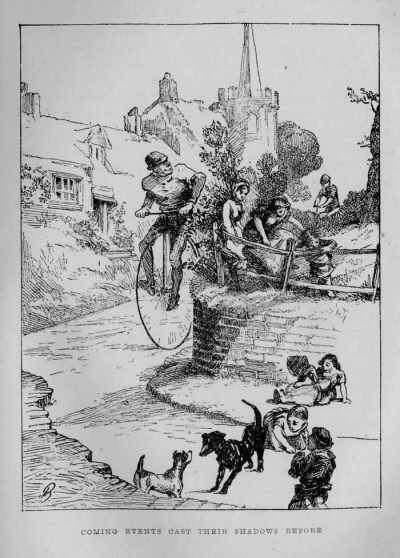 As with all these articles you need to read them in a Berty Wooster accent to get the full effect, but if this doesn't make you smile then you've already fallen off - the part where it's suggested you take advantage of an rider being knocked unconsious by digging out gravel from his skin using a nailbrush has to be one of the best bits of first-aid advice I've ever read...

Avoiding an accident!
Falls on the road or path are of course of occasional occurrence amongst cyclists. Although their frequency has been much exaggerated, a skilful rider will escape many an accident where an unskilful cyclist is certain to come to earth. Many accidents are caused by the failure of some part of the machine, and are practically inevitable and unavoidable ; beyond, of course, the exercise of a certain amount of care and supervision, an examination of all parts of the machine for cracks and flaws and so on will obviate many falls.

The habit of flying hills at a reckless pace, or run-aways through inadequate break power, will often be found at the bottom of some of the most serious accidents on the wheel ; and though caution may add to the time taken on the journey, it vastly improves the rider's chance of completing the trip in safety.

A sound and well fitted break is of course a sine qua. non to the road-riding cyclist. A stout pair of gloves is a great protection to the hands in the case of a header, and when a cropper at high speed seems inevitable the rider should avoid as far as possible falling against banks or similar obstructions. A fair fall on the road, especially if the shoulder can be made to come first to the ground, generally results in a series of somersaults, which, though damaging to the cuticle and the angles of the frame, is nothing like so serious in its results as a dead stop against a bank or wall.

It may seem absurd to offer hints how to fall, but it is quite an art of itself, for which many riders develop quite a peculiar talent. If the rider can by any little ingenuity twist or turn on to his back, the resulting injuries will be very slight. A case in point occurred, when a well-known rider came into violent collision with another on the track; throwing his shoulder forward, he managed to fall flat on his back, and beyond the shaking felt no ill effects.

Down hill on a bicycle the safest position is without doubt that in which the legs are placed on the handle-bar, as not only will a sharp application of the brake bring the rider over the front wheel and on to his feet, a somewhat jerky method of dismounting, but singularly serviceable in cases of emergency ; but in cases of a bad fall the rider gets at once clear of his machine, and all practical cyclists know that the most painful injuries are caused by the handle-bars striking the front of the legs, so that, provided the rider has full confidence in his break, the legs-over-handles position is the safest.

Should a rider fall on the road, as soon as the first pain has gone off he should essay to move. If his machine is uninjured and the cause of the cropper—a stone for example—clearly apparent, he should get on at once and make for the nearest doctor. If, on the other hand, he suspects a broken spring or a damaged bearing he will do well to walk, but in any case he should move off at once ere his wounds get stiff. Careful bandaging and the application of vaseline on lint will enable him to get home, and warm water and a soft sponge should be courageously employed to extract the grit and dust from the wounded surfaces ; their subsequent treatment should be left in the hands of the doctor.

The path falls are decidedly the most serious in one respect, for if a rider has the misfortune to fall on cinders the results will be very disfiguring, blue marks exactly like tattoo and much of the same nature being the results of cinders being left in the wounds. Some of the best racing men have been sadly dis- figured about the face, elbows, and knees in this way. It is therefore necessary for the rider or his friends to take instant action after an accident on the cinder path. Warm water if possible should be used, and the wounds superficially sponged over quickly to remove the surface cinder, then the edges of the wound which resemble a series of parallel deep scratches should be pulled gently apart and the cinders which lie in them gently removed with the corner of a towel or a bit of sponge, frequent washing with water being necessary. The pain in some cases is considerable, in others the force of the blow temporarily dulls the nerves, and advantage should be taken of the fact.

In cases of insensibility similar steps should be taken. On one occasion within our knowledge a friend seized a stiff nail-brush and brushed out a deep wound, with the double result of bringing the patient to by the combined effect of pain and blood-letting and of extracting all the cinder at the same time. Heroic reminders like these should however be gently used, under the eye of a doctor if by any means possible.

Face wounds should always be well cared for, and the victim should be encouraged to permit the painful process as long as possible. If a companion will firmly grasp both wrists it will be found of assistance in the more painful moments. As in the case of road falls, vaseline should be freely applied and a handkerchief tied round to prevent rubbing, and then the rider should be sent home as quickly as possible. Gentle fomentations with warm water will assist in keeping the wound open and extracting the foreign matter. Dr. G. B. Partridge, of Anerley, in a letter on this subject says :—' The best treatment undoubtedly is copious washing with warm water ; it need not to be desperately hot, and much of the foreign matter may thus be got rid of with the aid of a soft rag or a sponge.

Very often larger fragments more or less imbedded in the skin may be removed at the time with a needle point, and this will be a considerable gain as to speed of recovery, and subsequently large soft linseed-meal poultices will materially hasten the separation of the particles too deeply imbedded for such mechanical treatment. I do not think anything else can be done in aid of Nature's own process of cure, which is in itself fortunately a fairly rapid one, the superficial layers of the skin undergoing frequent removal.' Rest is a very great assistance to convalescence, and it is im- perative in the worst cases. Of course broken bones need the surgeon's care, as also do more serious wounds than those alluded to above. The great thing is not to desire too rapid a recovery, and to give Nature time to re-establish the disintegrated membranes.

Cyclists, being usually in good health, and fair condition, recover rapidly. There are numerous nostrums in the market, some of which are very successful inremoving stiffness, sprains, and bruises. Elliman's Embrocation and Henry's Thilum are both of service to the cyclist, and should be found in every dressing-room.