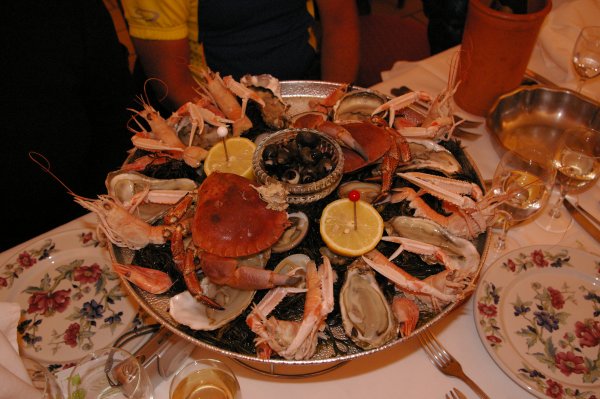 If anyone was asked "what makes France special?" then pretty high on the list would be the cuisine - or to be more specific - the food! It's become fashionable to say that in such-and-such country you can eat better than France, or that London is better than Paris, but that ignors the fundamental truth that the French eat out an aweful lot, both habitually in their lunchbreak and in the evening. That means that there are a huge number of restaurants and that the general standard is very, very high and with such competition prices are extremely low.

Brittany is no exception, and like the rest of France the way restaurants like to use local produce and have regional specialities makes Brittany different to other areas. Brittany is the 'Market Garden' of France and so no-where will you find better or fresher vegetables, and local fruit in season. The seafood is the best in France and some of the best in the world - wheras in the rest of France selling 'dead' shellfish such as crab and Langustines is common as it is in the rest of Europe, in Brittany those will be alive, and caught off the local coast the day before. To go, for example, on our 'Bay of Morlaix' route and eat seafood at the restaurant that was all caught in the Bay itself is something rather special.

The other local specality is recipies using 'ble noir' or Buckwheat flour - grown in the fields you cycle past. Most commonly used to make the savory crepes Brittany is famous for (and rightly) it also gets used in various puddings like 'Kig ar Farz' a bag pudding with lamb stew - real filling stuff...

But as I've already mentioned, the real distinctive thing about Breton cooking is the quality of ingredients used.

Those of you staying in hotels will have breakfast included in the price for every day. Otherwise you are free to eat where and when you like. Why do we do it like that? Well let's say you've cycled a morning and come across a lovely little restaurant at midday which gives you a 4-course meal including wine for 10-12 Euro (you'll pass places like this every day). Now there is no way you'll be able to eat another 4-course meal that evening! With any other cycling holiday company you will have such a meal waiting for you that evening- and you'll have paid for it whether you like it or not... Or say you arrive at your hotel and two doors down is the most gorgeous little creperie and you would much rather eat there. Well with anyone else you can't, because you've already paid for another 4-course meal at your hotel... You get the idea. Of course at every stop there is somewhere that will do you an evening meal - usually several and with a couple of exceptions you can eat at the hotel itself. When we use Chambre D'Hotes instead of hotels we only choose those that can offer an evening meal. In our experience these are stunning value - better than most restaurants and frequently cooked using produce from the owners garden or farm.

Of course campers are in a slightly different situation but basically the same rules apply. You eat when and where you want, and there is always somewhere to eat, or to buy food to cook yourself at every stop.

As for value, I've just picked two random samples from the hotels on our routes.

Followed by a choice of deserts.

Or at the Roc'h Velen from the 'Bay of Morlaix' tour, from their 20 Euro menu.

These haven't been picked to be exceptional, merely the norm for value and quality. Meals will range from good to exceptional and in a week you can really experiment.