To the foot of the mountains and disaster...

Packed up and breakfasted in the town we set off up a steep hill, but today was a bit special as it would take us right to the Spanish border and the base camp for the first attack on the mountains proper. By now the scenery was starting to get really spectacular and on the wide rolling road we kept overtaking each other as we took photographs - it really was a special ride. The photo here shows Bridget climbing out of Bagneres with her usual smile, little did either of us know that in under an hour she would be in an ambulance. 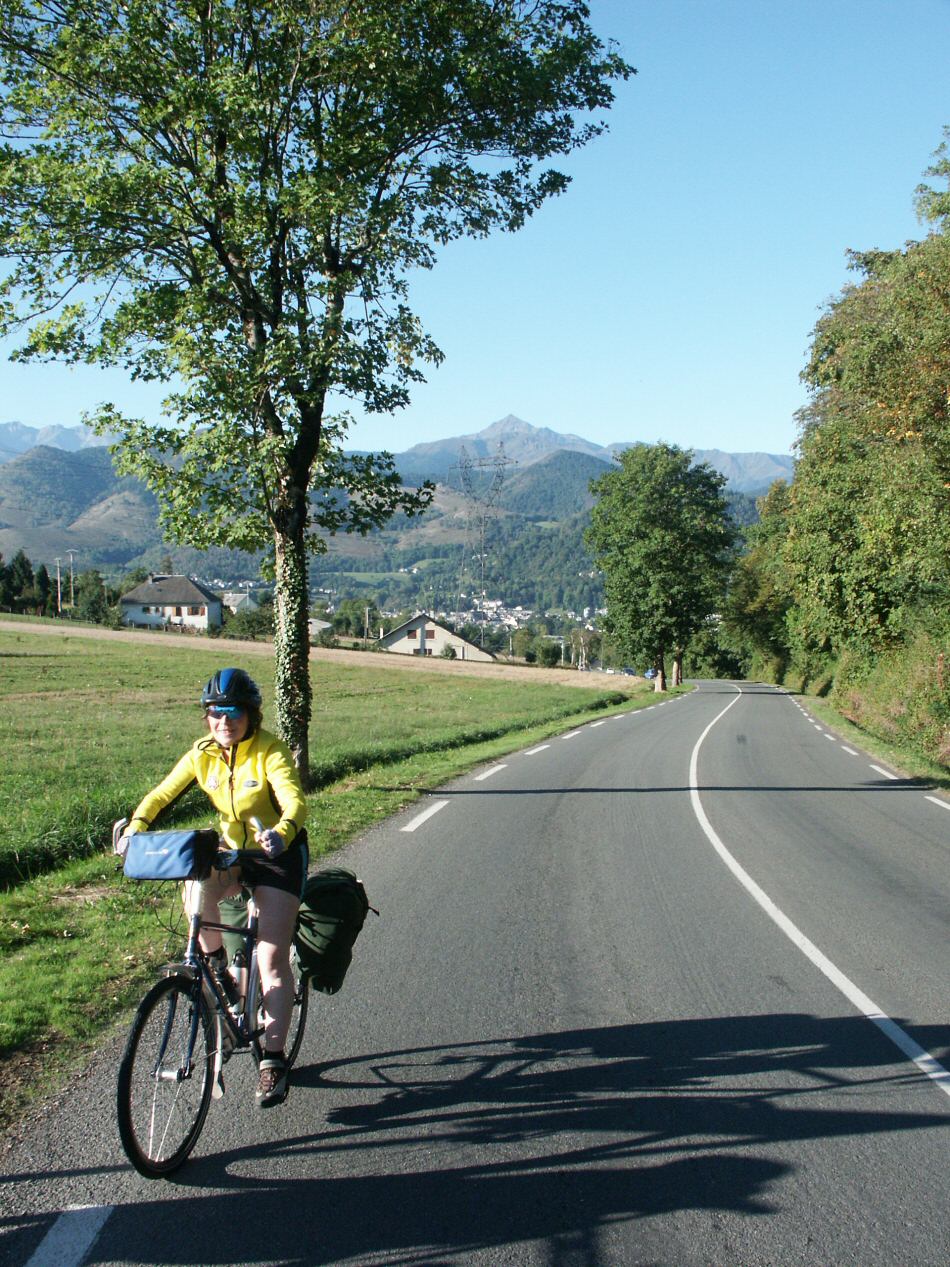 All seemed well, I'd got a little ahead of our usual tail-enders and decided to stop at a tiny bar and have a beer in the sunshine outside and wait for them. The froth had just touched my lips when my phone beeped to say I had a message (reception was patchy) - it was Frank. "Bridget's fallen off, she's banged her head and gone off to hospital with John - don't worry she seems OK and not too serious, I'm carrying on".

I couldn't get hold of Frank so leaving the beer I leapt on my bike and started to pile on to catch up. As I rode on the usual scenarios of what had happened, and what I'd have to do, kept scrolling though my mind, in the way that only a brain high on adrenaline and lactic acid will do. But no sign of Frank, abandoned bikes or wreckage...

After 10 km of flat-out cycling I hurtled into La Barthe-de-Neste. At the road sign waited Allan and Chip. "Where's Frank?" I asked, to be met with blank looks. They knew nothing. I was close to panic when the phone rang again - it was a breathless Frank to tell me he was just about to come into La Barthe! The last thing I'd though was that I'd been IN FRONT of Bridget, John and Frank, but they'd waited to take photos and I'd just not kept track of the riding order. Frank had been riding like a maniac to catch me up whilst I rode manfully away from him trying to catch him! 30 seconds later he hove into view and told the grim story. Bridget had lost control going fast down hill, got a wobble on and gone over the handlebars onto her head. Luckily she had her helmet on and it had smashed, cushioning the blow but she'd been unconscious for a few seconds. Frank had been flagged down by a motorist who'd sent him back, John had been just behind her. Frank thought she was OK, the bike was fine and so she'd be able to rejoin us soon. But I needed to talk to John...

By now the group were well split up but with things on my mind I rode to Montrejeau with Chip, Allen and Frank where the others were waiting for us.

My fast ride meant that now all of us, except for Evelyn and Jennie, were together and it was only 12.30pm. There were plenty of places to eat but I needed to find somewhere easily spotted from the road so that the two girls could find us. As it was we sat outside in very hot sun and eat a hearty meal, Evelyn and Jennie joining us after about 30 minutes.

After we were all well fed we set off on the last stage to St Beat, gently rolling and fast, I pushed my worries to the back of my mind by riding faster and faster. The skinny tyres gave me enough of an edge to leave the others behind except for William who resolutely stuck on my back wheel, slipstreaming. I wanted to get to the campsite as fast as possible so I could find the hospital phone number and hear if Bridget was OK. Swinging into St Beat I grabbed a beer with the others and then got the campsite owner to get me the hospital number, but just then my mobile rang and it was John. As I'd expected the hospital were going to keep Bridget in for the night as she'd been knocked out. They'd taken the bikes on the ambulance and I wasn't to worry about the gear as they had all that (as if). We talked about where and when they would rejoin, and he'd been in touch with Kate at our home.

Over the next few days this was the constant theme, the possibility of rejoining, the fact that she was out of hospital the next day. All in all not ideal and very disappointing, but nothing very serious, and all 'in-hand' because John was on the spot. It meant that though they we never far from my thoughts I could afford to relax about them and concentrate on getting the rest of the group over the mountains in one piece. Though it sounds callous I'm really glad that we never found out the seriousness of the situation until our return to Biarritz. When we met 10 days later Bridget was obviously still very shaky and John traumatized. For a couple who'd been so much part of the group, had raised so much money, and were obviously going to find the ride great fun, it was a tragedy.

There was another worry. John had said that he though that Bridget had lost control because the bike had developed a speed wobble and then she had braked in a panic, and with the powerful brakes fitted, gone over the handlebars. Speed wobbles are the bane of bicycle design, an uncontrolled shaking when the bike hits a resonance frequency. Various things can trigger it off, but generally it is caused by a whippy frame on a very heavily loaded bike. The 'BB Specials' had been in our fleet all season without problems, Bridget was on the smallest and thus stiffest frame and carrying far less weight both bodily and in gear than some, and yet none of them had had the slightest shimmy. My guess was that she may have been caught out by the camber of the road, French roads tend to slope steeply on the edge, and it would have been the right-hand curb rather than the left she would have been used to. Thus she may have run down the camber, corrected, gone down the camber again and sort of built up a wobble. It was a theory but not a very satisfactory one. In the next few days heavier riders would be coming off mountains at up to 80 kph, if one lost control the results could easily prove fatal.

That night I sneakily borrowed a 'BB Special' and tried to provoke a shake - they were stiff as farm gates, but it was still no guarantee. Over the next couple of cols my confidence in the design returned but until then I waited at the bottom of each col with some trepidation.

That evening we ate in camp - I forget what, but I had a lot on my mind...