The usual early breakfast of coffee-and-buns-in-a-bar, or for Jennie and Evelyn a second breakfast, having packed away enough for a month before leaving camp.

The Aspin is quite like the Perysourde in that it's green and beautiful with a nice top - but this time no bar:-( But today I screwed up... I'd already said to people that each of them was quite likely to have a bad day, and that it'd be regardless of the difficulty of the col - they'd just be 'off-form'. Today it was my turn. 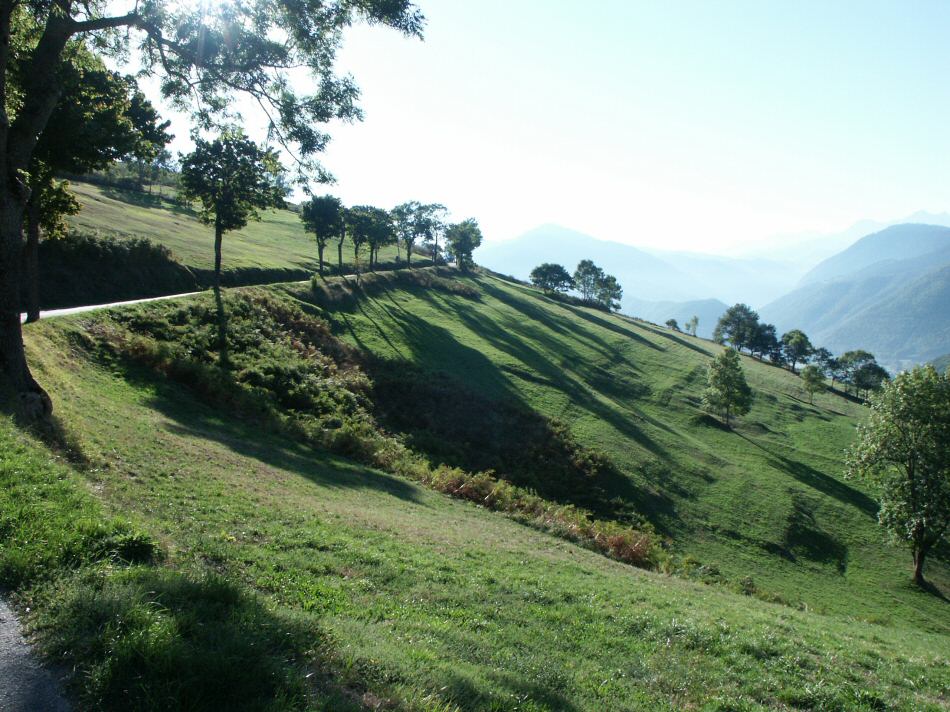 I'm always hassling the group that they should eat well and carry emergency supplies in order to avoid the 'bonk'. The 'bonk' is a cycling term for the moment, when by continuous effort, you've gradually drained the level of glucose in your blood to such an extent that you simply can't go on - and it happens very suddenly, hence the name. Trained athletes can run into the 'wall' (their equivalent) but 'normal' people generally just stop long before they get to that stage. On a bike, because you can use the gears and pace yourself so well it's possible for mere mortals to do the same thing. It's not nice and I've seen people sitting dazed at the side of the road or wobbling from side to side on their bikes with 'dead' eyes. It's never happened to me but even before I'd really started to work up the hill I knew that something was wrong - I was in bottom gear but neither working very hard, or getting puffed. That might seem to be a good thing but it isn't, I just didn't have the energy to get 'pumped up'. I'd only had one bun at breakfast, but in my fussing over the others I'd forgotten to stock up on my standard emergency food - bananas. The false sense of security of an relatively easy, known col had tripped me up - they're all hard. I stopped at a couple of small shops in the villages at the base of the col but both were shut. I was in trouble. Andrew rolled up and had a square of chocolate which helped but then I remembered Jennie was behind me - she always has something.

With a grin she extracted a small, brown shrink wrapped object, a slice of her very own 'Exceedingly Good Ring Cake' a concoction of dried fruit and alcohol with just the merest hint of cake mix holding it together. I was honoured, and gave it the respect, and destination, it deserved. In 30 seconds I was ready for anything and if the guys on the 'Tour de France' ever get hold of the stuff there's going to be some very puzzled dope testers out there...

So like Popeye after a tin of spinach, a revived 'team leader' rejoined the fray and piled up to the top passing several of the group on the way - even 'Rocket Legs'!:-P

Again the last km has some textbook switchbacked hairpins, each with breathtaking views and you could hear the chink of money going into Mr Kodak's coffers as we reeled off films to remember it by.

At the top we lounged around on the grass while crazy white cows licked the salt from our legs. Soon Evelyn piled up the last few metres looking more relaxed than she had any right to... 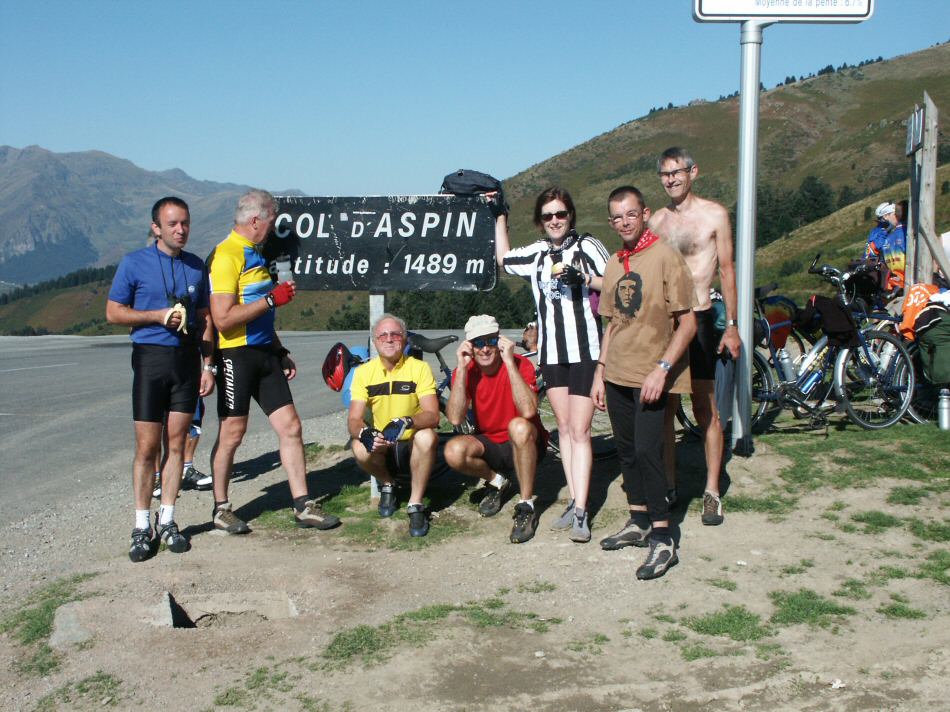 Apart from being a beautiful, and by Pyrenean standards, a not too hard, climb the good thing about the Aspin is that 2 kms down the other side (about 60 seconds for William) there is a cluster of roadside restaurants. We were there by 11.30, which gave an inordinate time for aperitifs, but we felt we'd earned them and the hard work for the day was over. Another five-course meal followed as soon as the waiter could lay the table...

Wobbling off very slowly and carefully, for at least 1/2 km, we then picked up speed and freewheeled into Campan - one stop I was REALLY looking forward to.

The campsite is a nasty 300m up from the centre of the village, but is tucked in back from the road and we spent a lazy afternoon lounging in camp and watching a parade of ancient vehicles which were on the 'Raide des Pyrenees'. Some of these cars dated from the 1920's, and whilst admiring their confidence in taking these old machines over some of the most difficult roads in Europe I did wonder at the state of their brakes by the time they reached the bottom... Frank befriended a pair of moth-eaten donkeys and it also gave Liz chance to have a 'proper' shower which used all the hot water the shower block contained - burrrrrrrr!

Campan is the place to stop if you're going to assault the Tormalet (surely the other way round?). It's at 800m and the only road goes straight up the col. But best of all is the hotel in the village - the 'Hotel de deux Cols'. I've cycled the Tormalet three times up to this date and each time spent a fantastic evening in the restaurant. Not only is it small, personal and inexpensive, it also serves superb food in portions suitable for cyclists. But the piece de resistance is the Patron. He is the most amazing character - insulting and teasing his clientele all evening in three languages whilst managing to be 100% efficient and professional at his job. I really can't speak too highly of this place - he left us with memories that we'll all cherish, aching sides from laughing and full stomachs.

Full and happy we trudged up the hill in total darkness apart from the carpet of stars in a black velvet sky. Tomorrow would be a very different day.