Back on familiar territory, I done this climb last time I was in the mountains and looked forward to it. On paper it's daunting, two big cols in one day, but both are very beautiful and the ride from the Soulor to Aubisque is along the corniche road, to date the most stunning road we'd ride on. This means that having conquered the Soulor we'd only drop about 100m before climbing the Aubisque. Still in total it would be much the same climb as to the top of the Tormalet the day before.

By now everyone seemed to be in the groove and just hunkered down for the work needed to get to the top. The only cloud on the horizon were in fact the clouds on the horizon... I promised I tell you when the weather changed, well it happened today. Not that it was bad, but we could feel it closing in - to be honest we were all a bit burnt by now so a day of shade wouldn't go amiss and make it an easier climb. Hey it was a cinch anyway;-)

The bar at the top made us sandwiches which we devoured, But my now things were closing in and Jennie just made it before the heavens opened. Evelyn was just-a-little-too-late, see pic... Just prior to this I sent the others off to avoid the worse of the weather whilst I manfully waited - as it was they got soaked. It was the works, thunder and lightening included:-) I guess my name was mud. 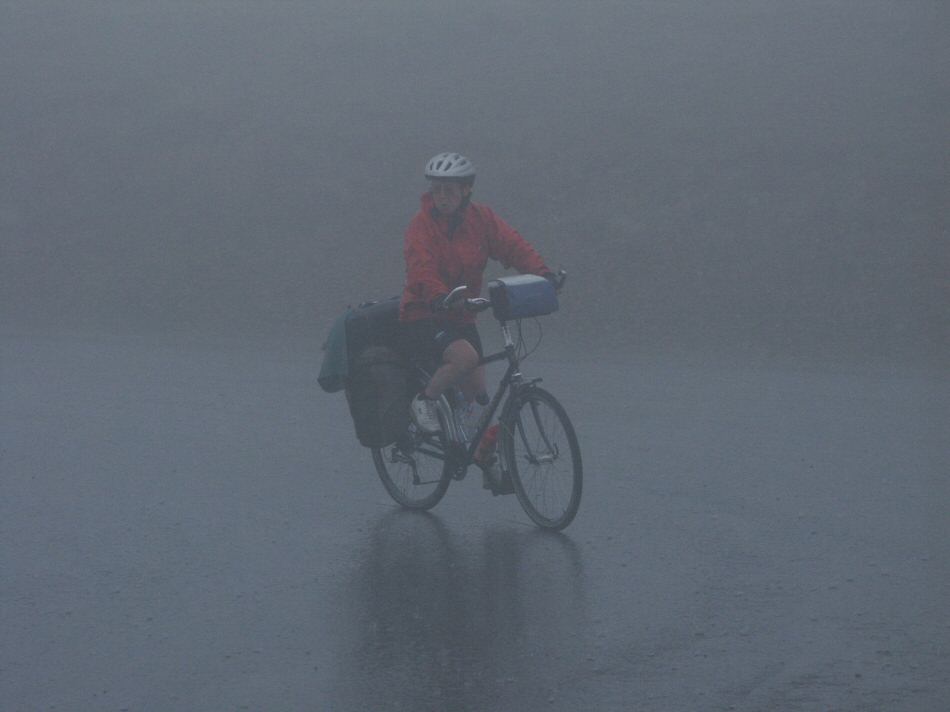 After Evelyn arrived, Jennie and I waited with her for it to clear - I really considered it too dangerous to go on, as the corniche is very exposed and Evelyn looked tired. After an hour I decided they should go down the other side of the Soulor and then I'd go on (heroically) so the others wouldn't get lost/panic. The plan was for them to meet up the following day. So we put on all our wet weather gear, were actually saying goodby when the clouds cleared and sweeping away to our left was the Aubisque corniche. I looked at them both, smiled and said "lets go for it".

They're a game pair:-) What a decision 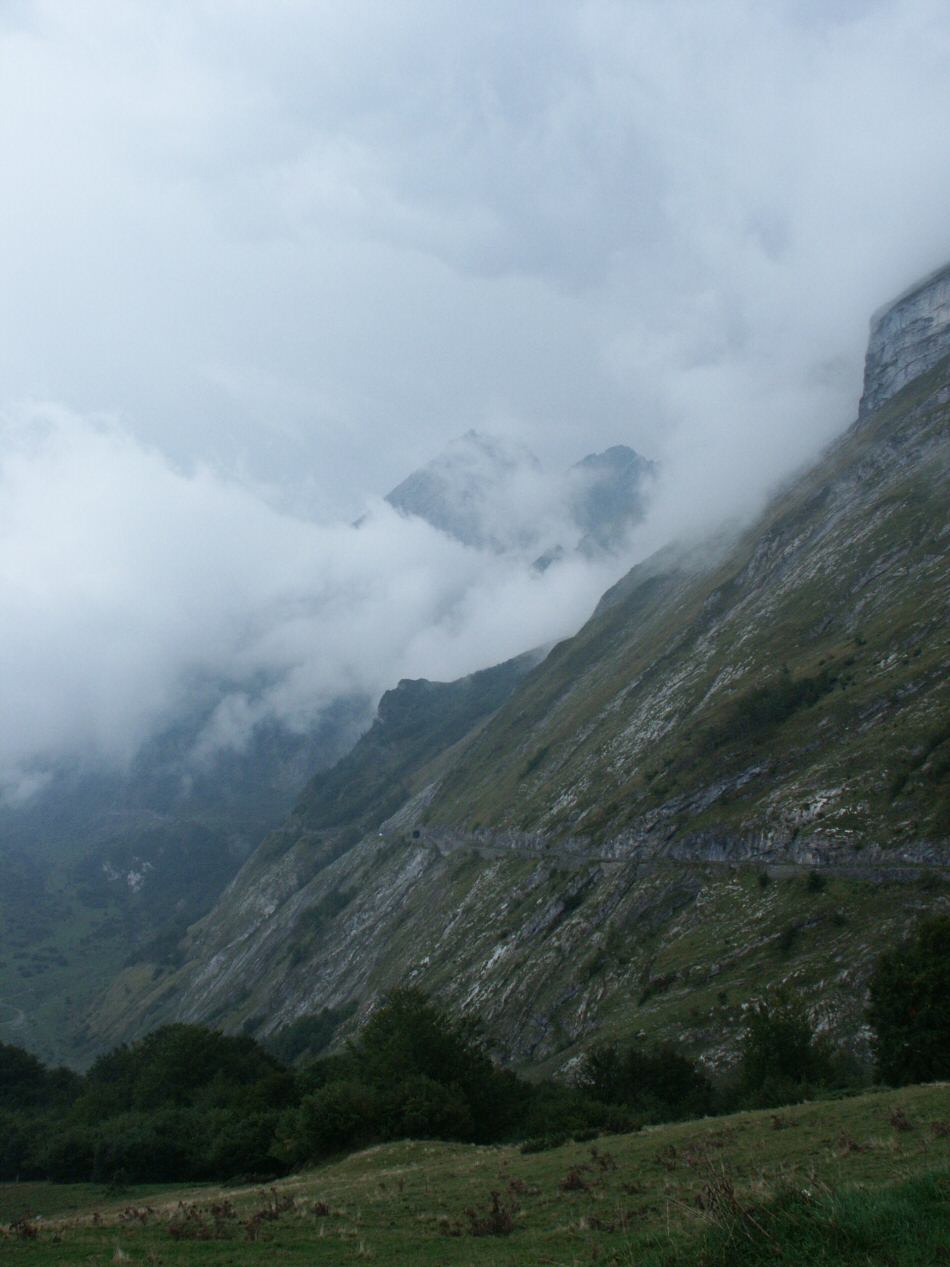 Sometimes things are 'meant to be', and this was one of those occasions. Two years ago to the day, Evelyn's life-partener Richard died. As mentioned in the 'runners and riders' section one of the reasons Evelyn had come on the ride was to raise money for Little Owl, the fishing lake for disabled that had been one of his projects before he died. It meant it was an important day for Evelyn, and for the first time she talked and laughed about him as we cycled over one of the most wonderful roads in Europe. The weather wasn't clear, more Tolkeinesque with swirling clouds giving weird scale to the landscape. It was a very special ride - with special people, and I for one hardly noticed the climb as we finally crested the Aubisque. Thanks girls... 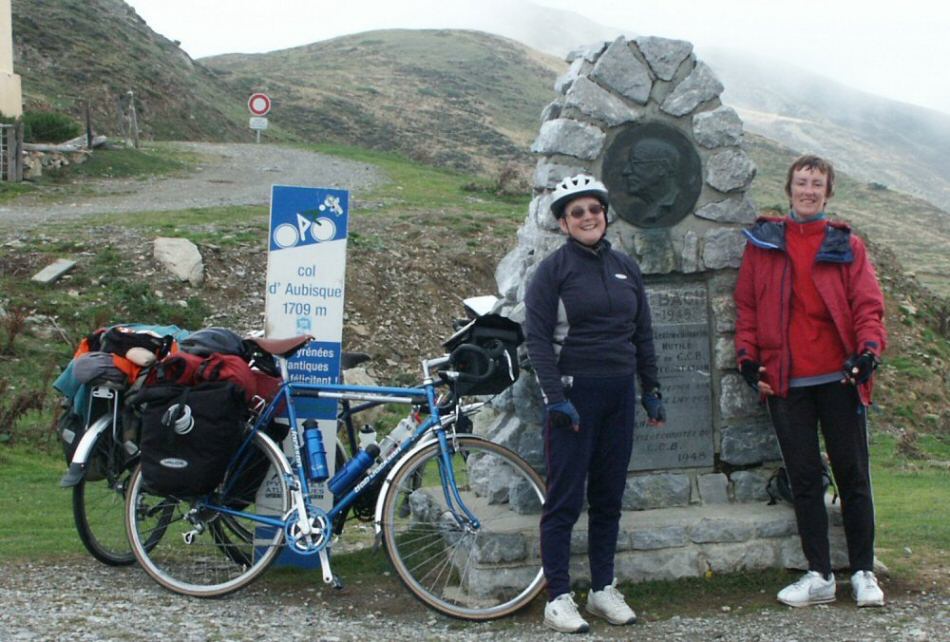 So down the other side - a dramatic rugged descent, twisting and turning though the rocky landscape and down to Laruns.

Laruns is a lovely little town with lots of campsites, but all that we looked at pretty scruffy and unappetising. In the end we settled for the least grim which was OK and friendly enough, but right by the main road, once again it was expensive... It was raining again by now and so after a lot of humming and haring we decided to walk back into the town to eat. The couple of places we tried threw their hands up at the thought of 13 people so we split and the fortunate went into a nice looking restaurant whilst the majority slummed it in a little formica and strip light pizzaria. It was wonderful! The owners seemed to be having a party to so we had a huge meal and quaffed an inordinate amount of red wine before the others joined us again to find us drunk and rowdy and very happy. We then all tottered off to bed:-) Oh I forget - Chip insisted that William translate the 'wide-mouth-frog' joke to the bar's regular cutomers...