When I wrote to the gang at the very beginning of this epic, describing the route I said this would be the killer day. Look at the map and there are no cols, and a pathetic two single arrows in the whole day. If the Michelin man had been in a car the day before he was 'out to lunch' today. Four years previously I'd done this ride and it had been wet and miserable with visibility down to 10m for much of it. On the steepest section one of our stronger riders had fallen off when his pedals had stalled and he couldn't get his foot down fast enough. My guess is that at it's steepest it's 13-14% which is a triple arrow, and it's not a lot less than this for much of the climb. There is a col when you get to the 'top' then a further 200m+ climb to another, this time 'unmarked' but classic looking col making it a good 1000m of climbing. To make things worse there's no food for 40kms, not a bar, restaurant or even road-kill - zip...

This time, after the Marie Blanche everyone was forewarned and treated the (hawk-spit) Michelin map with the contempt it deserved...

The campsite provided an excellent breakfast and we set off. 1km down the road the campsite owner hurtled up in her car to the front of the group, thinking we'd done a 'runner' over the bill - as usual everyone pointed at me and waved their arms so she came back to remonstrate as her husband hurtled up in another car to tell her we'd left the dosh on the breakfast table (as in every other establishment) much merryment all round...

I was feeling a bit queasy, probably a reaction to all the food and effort that my body was unused to so I stopped for a mineral water at Montory after 4 kms. Here Rob found a T-shirt that he simply had to buy (see his 'biog') - very tasteful...

It took 12 kms to get to the village of Tardets-Sorholus where the road did it's 'Jacob's ladder' in front of us. Boy was I right - it was every man/woman for themselves as we crashed into first gears and started to grind up. Though I waited for most at the bottom before starting, once again I was forced to abandon the slower riders - I just don't have enough in reserve to do anything but to look after myself and survive on a climb like this - if the worst happened I'd go back in a taxi... 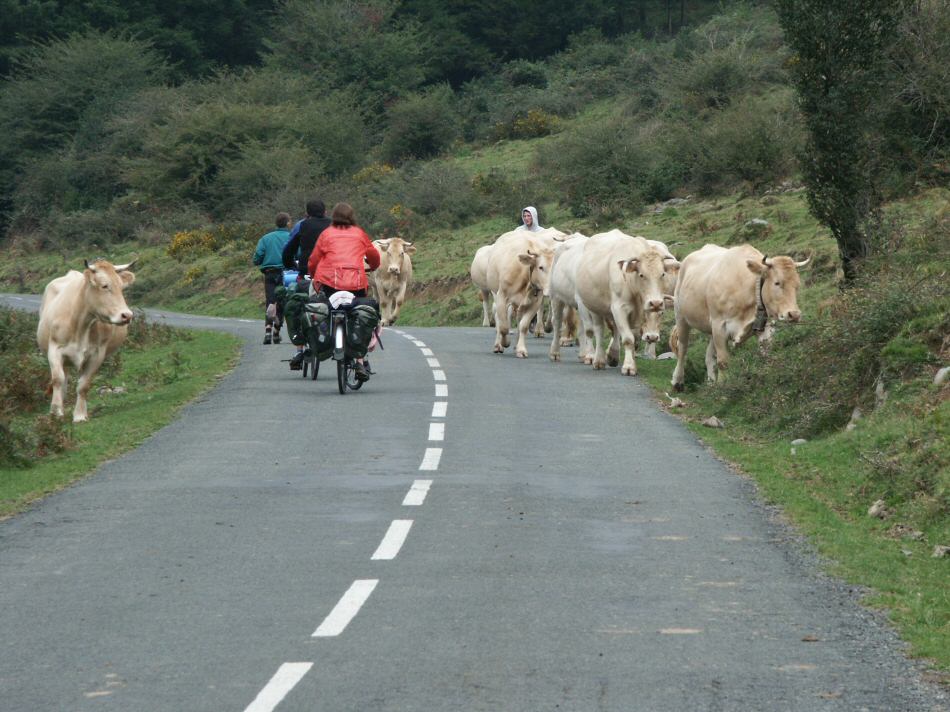 As I remembered it was bastard steep. There's something depressing about pushing as hard as you can in bottom gear knowing that if steepens there's nothing left, the 'missing bottom ratio' on my bike didn't help either. But to be honest I was rather pleased with myself and felt pretty strong. The weather was drizzly but OK and so it was much more pleasant than last time. As the endorphins cut in I was even enjoying myself. As cols go it's not spectacular, you'd find much the same scenery in places in England and there was little impression of altitude. But yes I was having fun... I finally reached the others all waiting looking shell-shocked at the col sign 'Col de Lacharria' at 832m. Meryl looked wiped out - she'd set off very early after yesterday and I think she'd suffered on the climb. There was no sign of Jeff, who'd gone on as usual, or Evelyn and Jennie who were no doubt a long way back as I'd started with them and climbed quite fast. Trouble was it was cold and wet so I decided to push on, it was imperative that at least some of us get to a restaurant to book the rest in as at the current rate we'd be very late - too late to eat. The girls wouldn't get lost, they'd have to catch up later. 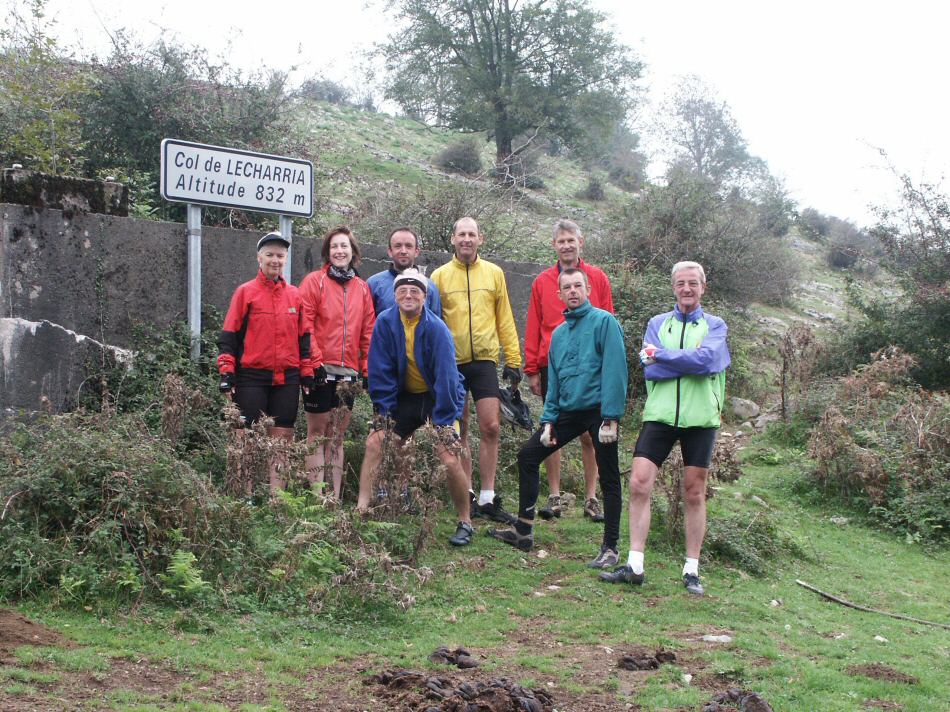 Giving the others the happy news that this was far from the top, we set off down (yes down!) the other side for some time before we hit another open, wind-swept plateau. This climbed gently then progressively more steeply up to the second 'col' at (I guessed) around 1000m. I was still feeling pretty strong and what with the adrenaline of worry was piling on a bit. Then I saw the top and began to hallucinate. There above the col shimmered the apparition of a large Auberge. I blinked a few times but it was still there. Last time I'd come the visibility had been so bad we'd cycled straight past without seeing it! And praise be Jeff's bike was outside without Jeff, so either it was open or he'd jumped over the edge in desperation...

Looking back I had the pleasure of watching rider after rider coming up and bursting into huge grins as they realised what was in the offing:-)

A short note here. The 100m road from the col to the restaurant was on a 1 in 4 hill. I was fully capable of riding this, but at a critical moment a Griffon Vulture (2.5m wingspan) floated 10m over my head and so I stopped and shouted to the others (who were watching from the balcony of the restaurant) to "look!". The subsequent pictures of me distributed amongst the group, of me pushing my bike are not a fair reflection of what happened. I could have ridden up, but I couldn't restart. OK? Everyone happy? Had your little laugh at my expense? - Good... 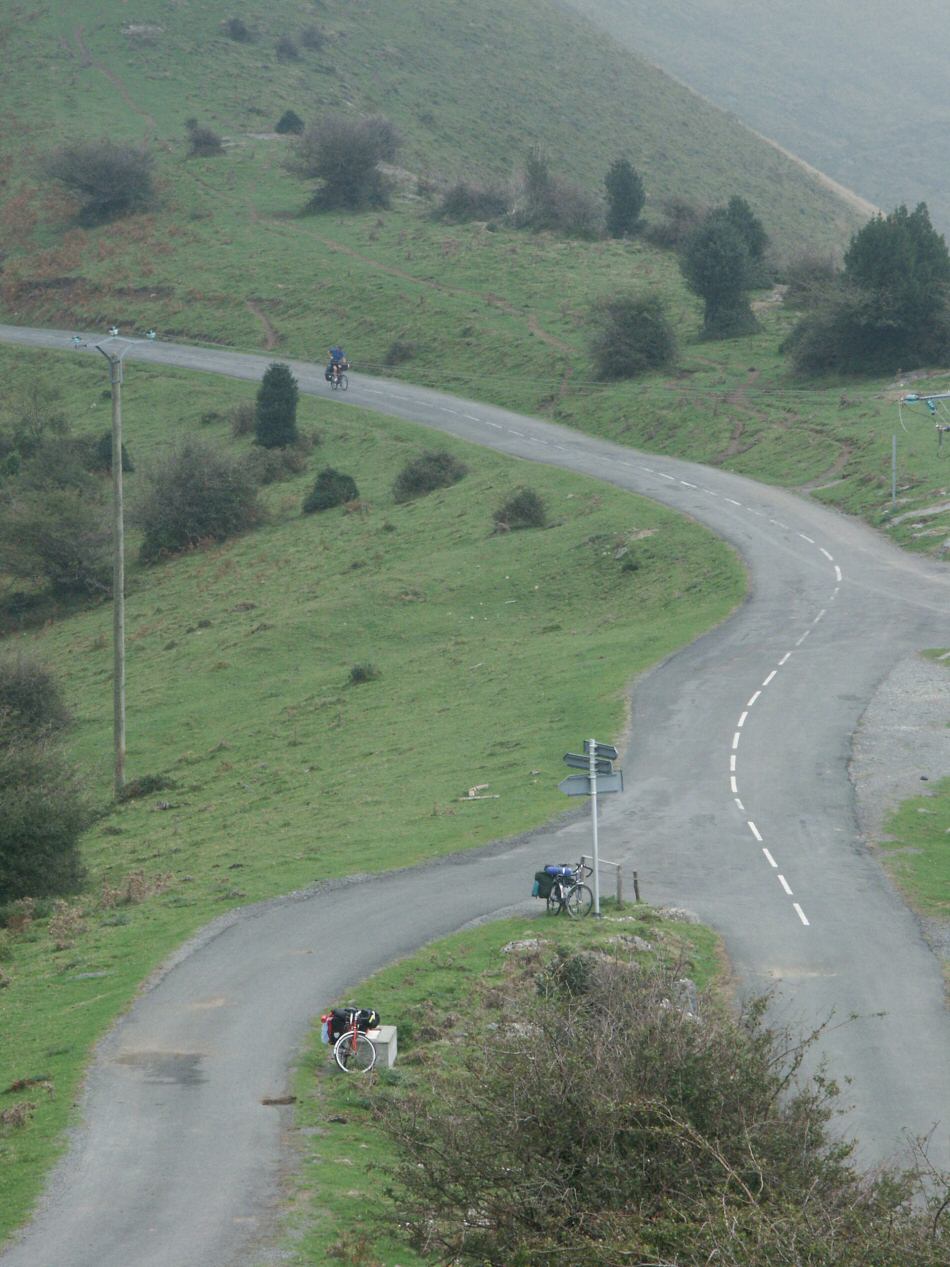 So we waited for a while and drank beer. Every so often I'd pop out and look down on the others arriving and at the vultures. It was clearing and the views were starting to look pretty spectacular as shafts of sunlight cut through the clouds - Beautiful. 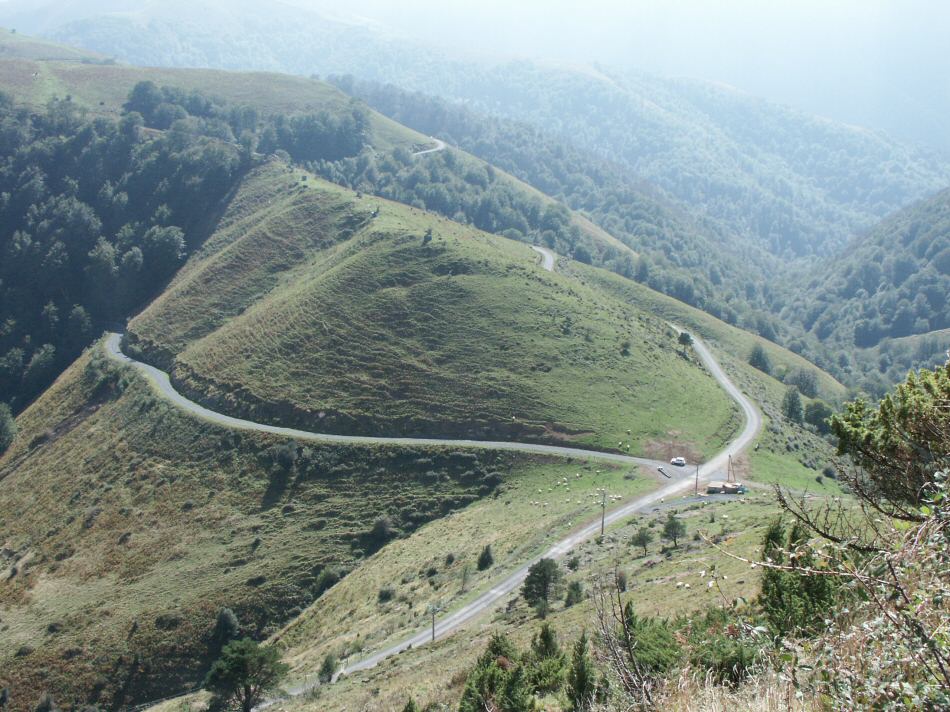 We sat down and the meal was bloody marvellous and all the better for being unexpected. We'd just started to eat our first course when Jennie and Evelyn walked in - knackered but happy and once again looking better than they had any right to do, maybe they knew something I didn't.

As usual we ate like horses and talked about the climb. Even Jeff said it was the worst hill he'd ever come across which was some doing. When time for desert came Chip was amazed when a diner next to us sent back his when he saw the great slab of Gateau Basque his companion had ordered - and the waiter took it as a complement. Of course we all had Gateau Basque.

We didn't want to leave but the sun was getting seriously interesting outside.

There then followed what might be the most magnificent scenery I've ever seen, only rivalled by the switchbacks of the Perysourde and the Corniche to the Aubisque. Last time it was all I could do to see the edge of the road! The road wound its way around the mountains as a sliver of tarmac clinging to the edge. The light was breathtaking, we were all together which was wonderful. We took a very long time over those few kms, we were all bloated with food, but somehow it was a moment of beauty we all wanted to share. I'd dreaded this day and it turned out to be perhaps the best of the trip - strange how it works out.

I'd run out of hyperbole if I carry on, the pictures don't even give a fraction of the atmosphere and the only place it is safe is burnt into our memories. We even got buzzed by a helicopter to add some excitement to our reverie. 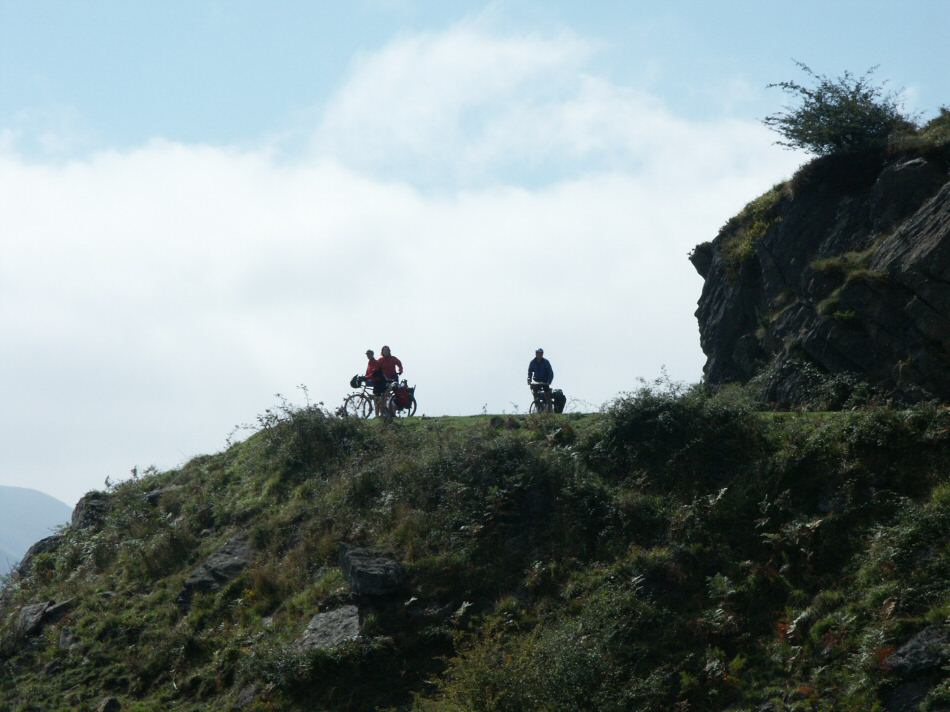 But though we must have loitered for over an hour time was marching on and so reluctantly we dropped down to the valley as if in freefall. I found myself riding with William as we came into St Jean Pied-de-Port when my phone rang.

Another faller. This time Rob had lost it on the descent - Our resident doctor (Evelyn) had bound his wounds and Andrew put the bike back together, he was OK, something wrong with the brakes but they were OK to continue and they'd see us at the campsite.

Once again I was in a position where I wanted to get to the campsite so I could organise taxis etc if need be so I pressed on, passing Allan sipping beer outside a bar in St Jean (lucky guy). William tracked my back wheel as before, though I had to stop for him to have a pee (worse than the kids), just short of the campsite at St Etienne de Baigorry. Liz caught us up but not before William had managed to get his skinshorts up:-)

The campsite is one of the best, very quiet but with great facilities and the village has a supermarket, bars, restaurants etc. There was also a 'Trinket', a huge squash court like building, where they play Pelotte - imagine playing squash on a court the size of a tennis court but hitting the ball with your bare hand. It's really spectacular and I'd hoped that there'd be a game on that night, but when I asked at the club bar the girl said no.

Eventually everyone arrived safe and sound - Rob was a bit shaken but Andrew had been brilliant and repaired the bent brake hanger with his extensive toolkit - there really wasn't much to do. But on inspection I noticed Rob had got though a set of brake blocks - right down to the metal! No worries, I had spares, but it showed how hard the descents were - the blocks were new 12 days ago. I might add that this was the only time any of the bikes was touched in the entire fortnight - a combined total of well over 10,000 km with not a single breakdown or puncture - spectacular.

After the exercise and vast amount of food I'd poured down my throat over the day my stomach was feeling considerably worse and I was fighting to keep down what it contained. I took it easy, nibbled on something in camp and felt a little better, but it was early bed for yours truly. 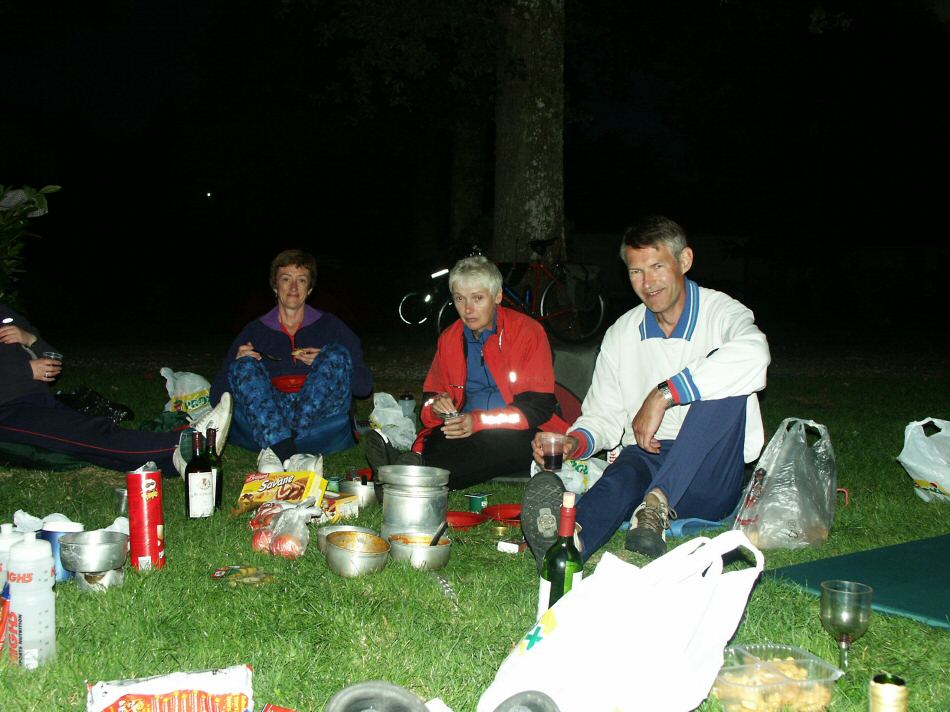 All the others ate in Camp too, except for Allan who had steak and chips (HOW!!!!) in the 'Trinket' bar and watched a match of Pelotte - damn!