The end. Inevitably after all we'd done this would be an anticlimax. I'd tried to keep us in the mountains until the last minute but now it was over. We breakfasted at the campsite bar and then off, mostly downhill to Biarritz. It was a good ride with some beautiful countryside as we wound down the valley of the river 'Nivelle'. A quick stop at the cash machines of St Pee (honest) and a km climb out of the town. I piled up this and for the first time of the week was first to the top - I wanted to make sure of pictures of everyone climbing and it was the only way to do it. From there we pottered on and found the route was waymarked for cyclotourists which was nice. Pretty, wooded and countrified by turn the road gradually brought us into the mad traffic of Biarritz where after doing battle with various lorries and cars we arrived at Base camp after 13 days and all those mountains. 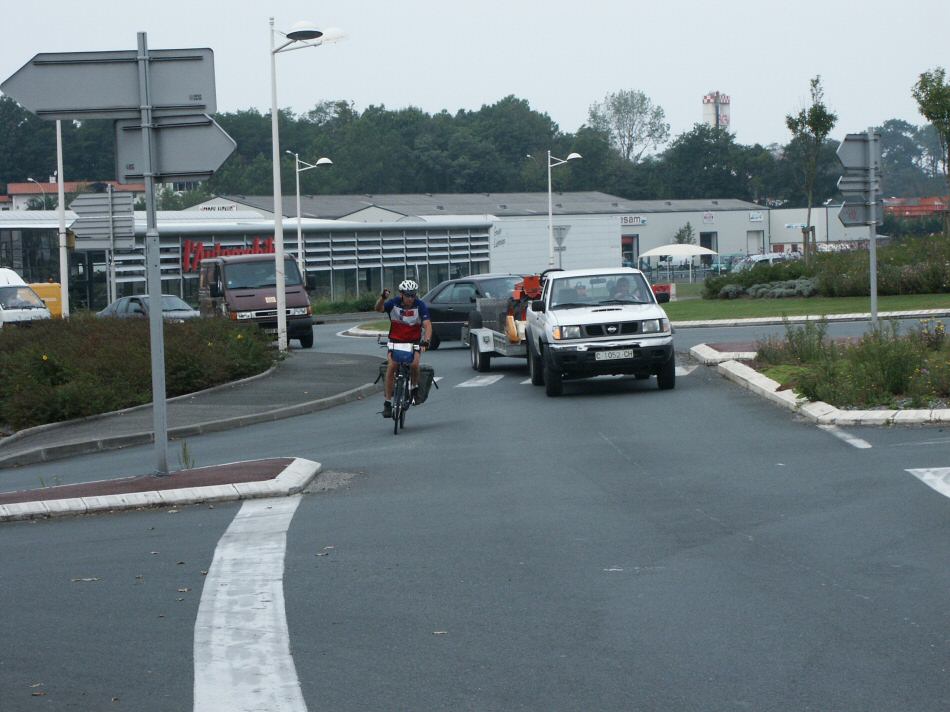 And I'm sorry guys, because at this point I rather lost it. After a year in the planning and a wonderful but very stressful fortnight I think my system said 'enough' and shut down. I didn't let myself sit down, just started packing up the gear, putting bikes on the trailer and generally being anti-social. I didn't want to talk because I was pretty close to tears, anti-climax doesn't describe the half of it. I didn't organise food for anyone, didn't fuss over whether we'd eat in or at a restaurant - I just needed to stop. You were all great and left me alone unless I needed help - thanks. Then John and Bridget came down (they'd taken a chalet at the campsite). I don't know who looked worse, John was still shocked, Bridget drowsy and smelling of hospital. As I write, six weeks after the accident, Bridget is still not back at work though she plans to be soon. Apparently she was unconscious for several minutes, John thought she was dead and had to stop her swallowing her tongue, I just found it all hard to take - sorry again. John and Bridget went back to their chalet - she was too tired to come out with us that night. 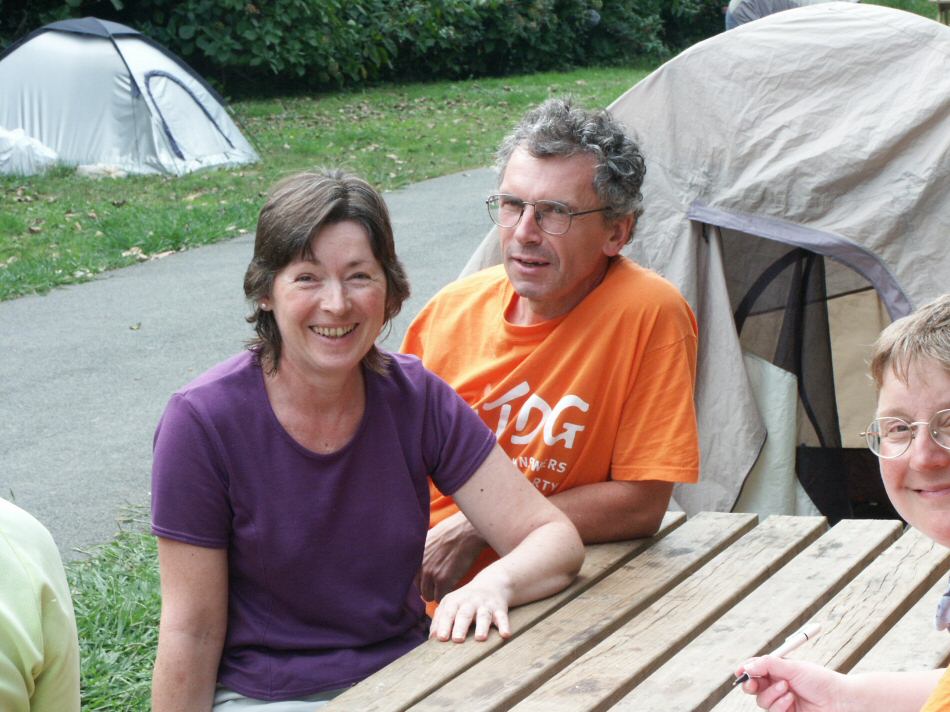 But the packing was soon done, many hands make light work, and we'd decided to eat out at the same place as on our first night - the other options were too far away. William, bless him, went off and booked us in as on a Friday I feared there'd be no room.

So in civvies, not a shred of lycra in sight, we went off and had out last meal together. It was uninspiring as before and they refused to serve us drinks afterwards. I think everyone felt a bit like me, Jeff sloped off quietly as he was in a hotel - he had an early train to catch, and the rest of us talked but not animatedly. You see when you been through something like that you don't need to talk about it straight away. I've even waited a month before writing this. They say that great sportsmen, after some achievement, need time for the reality to sink in, and I think we all now know what that must be like.

So early to bed, and with another 8 hour drive ahead I needed a good sleep.

On the terrace above us was a mobile home and some friends sat chatting quietly amongst themselves. As drink no-doubt flowed, the volume increased, but to be honest they weren't being rowdy. BUT THEY WERE KEEPIN ME AWAKE. At 3.00am one of them decided to put on his car stereo and play some cool rap music to entertain the campsite. I exploded out of my tent - stormed up to them and proceeded to rant at them about this being a campsite not a discotheque. You have to imagine the scene - a large, bearded, semi-naked, middle-aged man in bare feet and with the worlds weirdest tan glowing in the dark, ranting at them in broken French before storming off - I didn't need the bullwhip and the baseball bat.

They were very, very quiet afterwards...

After 3 hours sleep I woke and packed the last of the gear, tipping people out of their tents and sleeping bags in the process. Then with everything loaded we all go off to the previous night's restaurant to once again lay waste to the breakfast menu. Tearful goodbye's and then .... home.

It's the middle of November, it all seems so long ago. Bridget seems to have almost completely recovered and is back at work. I haven't been on the bike since and my tan has peeled off. But sometimes I can still feel the hot sun on me, the smell of the mountains, the wind roaring in my ears on my descents, the feel of the handlebars in my hands. It's hard to describe to others, but when you are riding in the mountains it's as if your senses are working at 100% along with the rest of your body. You feel so alive. The days we spent together, riding, laughing, drinking, will remain with me and I'm sure everyone else, for the rest of our lives. 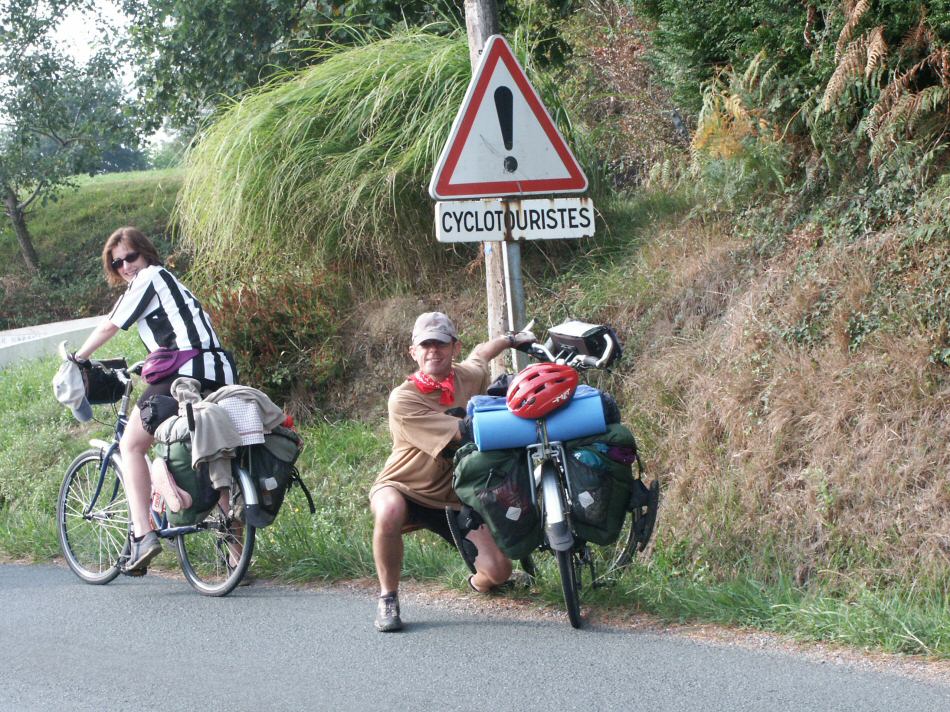