You are here: Home » Home » Cycling Article Blog » A newcomer to cycling in france gets hooked

A newcomer to cycling in france gets hooked

Life In A Pannier

A short article by James Ellis

As I laboured up the hill with the wind driving into my face, sweat mingling with the rain that dripped down my neck, listening to my breath rasping with each aching push of the slippery pedals, I couldn’t help but think: 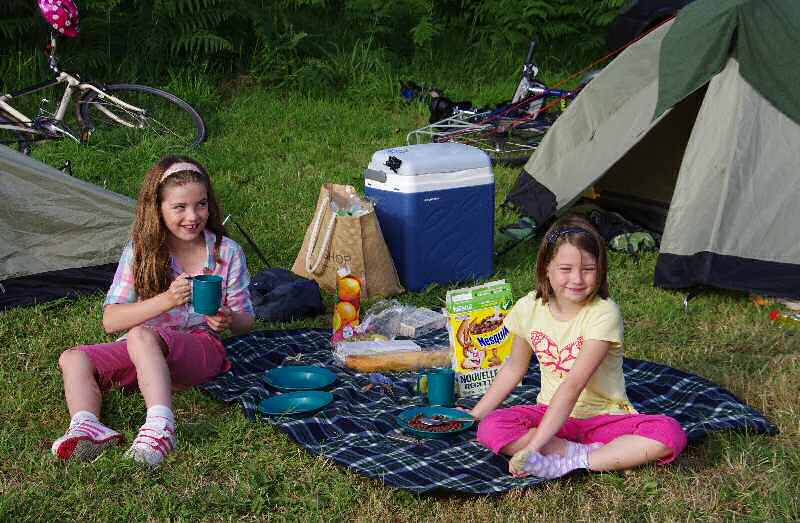 Mad as a hatter of course.

Why else would anyone choose to tour Brittany slung across two wheels, sleeping in an orange bag made by a man called Wolfskin, when they could be snuggled up in an hotel with a hot and cold running bidet?

As I crested the hill the clouds parted, the sun shone on my back, the birds began to sing, flowers blossomed, choirs choired and I coasted for a hundred miles to the restaurant where I set about a bowl of steaming, tongue-lacquering coffee and assorted crepes, cakes and croissant.

The whirr of wheel on tarmac. You can’t beat it – and goodness knows you soon become an expert on tarmac if you spend any length of time in the saddle. Cycle shorts help. They save wear and tear on the areas you least want worn and torn and make you feel really athletic – even if you do look like a pound of potatoes stuffed into two chipolatas.

Brittany has lots of tarmac – and tow-paths and woods and meadows and lakes – and there’s nobody there! Countless leafy country lanes, ruined abbeys, villages and market towns and there’s not a Breton in sight. Where are they? They’re in the bar with me tucking into crepes and coffee, that’s where. And quite right too.

It’s only a difference of a few degrees in latitude, but somehow Brittany is a distant time and place. A Devon of thirty years ago. A place where you might find five dysfunctional children and their dog taking up on ginger beer and making life hell for burly smugglers and harassed Aunt Margarets.

Nowadays the famous five are Geoff and Kate Husband and their three children Arthur, Sam and Rosie, and they have lots of wizard adventures in Brittany running their company Breton Bikes. It’s quite straightforward. They like cycling and camping and touring France – and they want you to, too. So they provide all the bikes and tandems and trailers and tents and routes and backup and encouragement, and all you do is show up, get on, fall off, get on again and wobble away in the general direction of... well, wherever you want to really.

They run all sorts of tours for all sorts of people. The received wisdom is that it’s not just about the cycling bit, or the camping bit, or the even the crepes and coffee bit – but about the whole thing. It’s about packing up your life for a week and putting it in a pannier. Personally, I think it’s definitely about the crepes and coffee. But whatever your taste and experience there’s something here for you.

We went on the Whitsun Family Tour, an annual event in which the Husbands join in too. All we had to do was join the ferry at Plymouth and provided it sailed to Roscoff, Breton Bikes would meet us there and do the rest. The ferry is an inclusive option but not everyone is straining for a seven-hour crossing so if you want to, you can make your on way to their base in Gouarec, or travel by Eurostar to Paris and take the train to St Brieuc where again, they will meet you.

There were rides almost every day but at any point we could have feigned illness and hidden in our tents until they’d gone and then spent the day swimming and shopping and sleeping. Actually, I think a fiver in the back pocket would also have worked. Our longest ride of the week was twenty-two miles when we moved campsites from Gouarec to Priziac - half a day’s gentle exercise with stops for coffee and lunch along the way.

All the holidays start and finish on a Saturday and a final, full day’s cycling is squeezed in by travelling back on the late ferry. A night crossing sounds fun but book a cabin if you can - and well in advance. We had reclining chairs arranged but the room had a distinct odour de mal and it was almost impossible to arrange an alternative. Only a last minute cancellation saved us from a night on the floor, but if it comes to it find one of the cinemas or a quiet corridor and crash out there.

The cost of the Whitsun Family Tour for two children and one adult was £425 and although camping can be inexpensive remember you are in France, and consequently surrounded by French cuisine. Although we made an effort to cook for ourselves professional culinary temptations often proved too great. I had originally budgeted £20 a day for the three of us but in the event we spent almost twice as much. Add to that cycle shorts, T-shirts and a £35 campsite charge (for all 3 of us) and the costs can mount up.

It was a hard thing when it came to hand in our bikes, I felt I had made that Brooks saddle my own and their was a tear in my eye as I peeled off my cycle shorts and realised I’d had them on back to front all week. But who cares, we’ll be back - and I hear they do hotel and bidet tours as well…

This lovely article was written 15 years ago, but you get the idea;-) -