Altogether now - "We're all off to Sunny Spain ...etc" 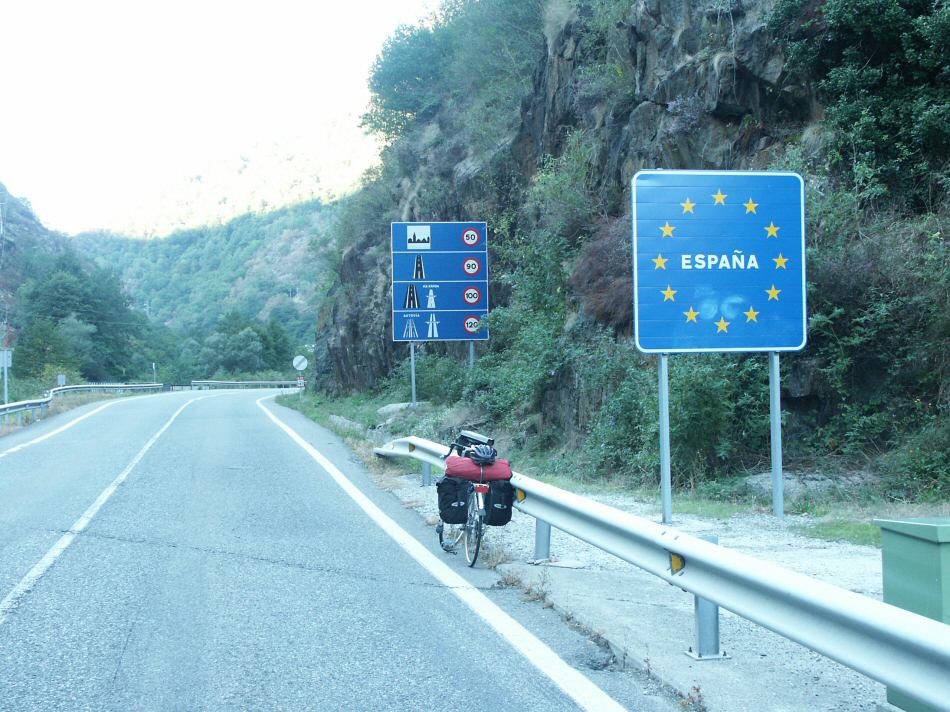 Feeling happier in my mind about Bridget I could concentrate on the rest of the group. It was rather nice to see nervous faces all around, I knew they'd all be fine, but it blew one of my "cunning plans". You see the run to the Spanish village of Bossost at the foot of the col was a good 15 kms and a climb of 200m - exactly the worst case scenario with regards to Evelyn as she would inevitably do the whole thing in first and so lose a lot of ground. I'd encouraged her to set off early, but as it was the others nervousness meant they were up and off even earlier! Thus it was that Evelyn and Jennie (who for once looked tired too) arrived 45 minutes after the rest at Bossost. 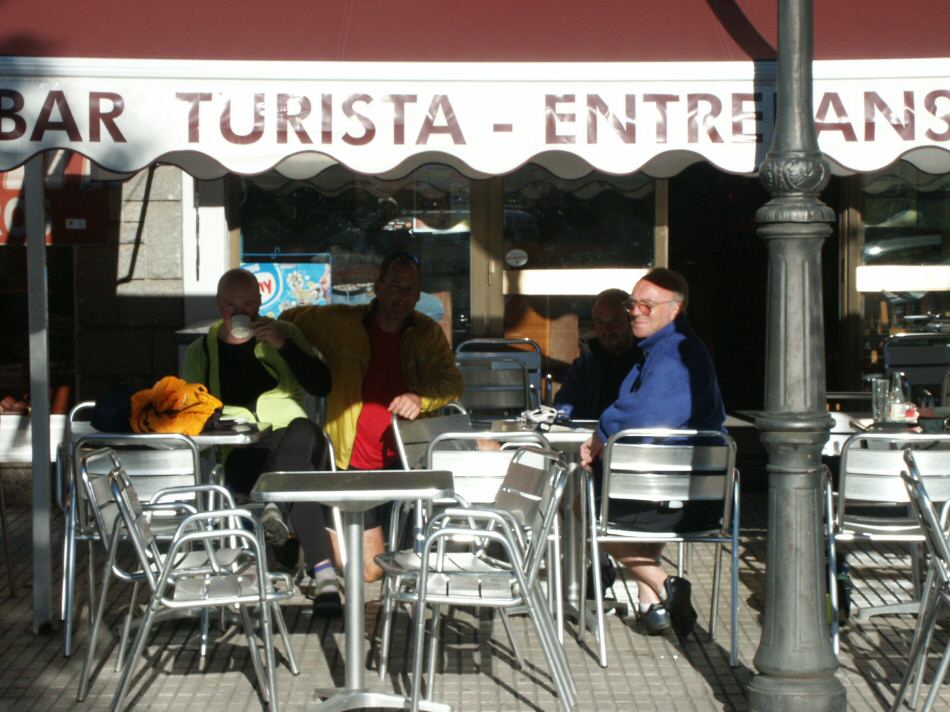 BUT now my theories were to be put to the test. I thought that with a short, relatively easy col we'd be able to have a bun and coffee in Bossost and still get to the top with plenty of time to hurtle down to Bagneres for lunch. Evelyn's unique experience and knowledge of first gear would stand her in good stead and she'd not fall too far behind.

So for more than half the group this was to be the first col of their lives, and I'd chosen it with great care. You see the Portillon is a small (only 1320m!) col but an absolute swine - but only from the French side. I'd done it that way several times before, but had always thought what fabulous views were to be had on the Spanish side. As anyone who's done col climbing will tell you, you always see a lot more going up than hurtling back down when you tend to concentrate on not going over the edge or going down a pothole. 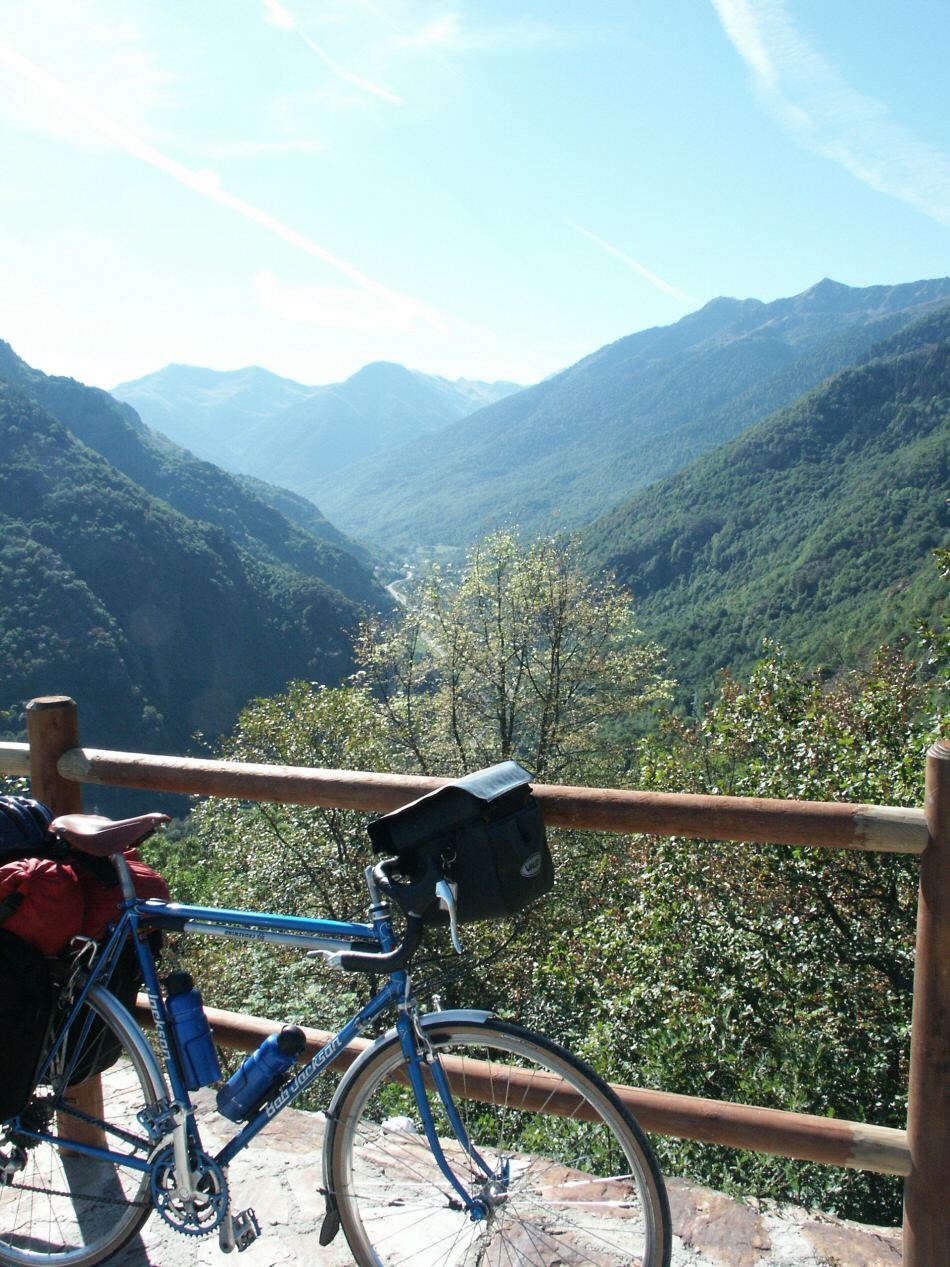 I was right. The climb was beautiful, and I didn't even have to use first gear. The views were gorgeous enough to make me forget my legs and at the top I was greeted by a bunch of grinning and relieved cyclists. Rob in particular was feeling good as the last time he'd come to the mountains with me he had 'died' on the Portillon (renaming it the "col de Portillo Bastard"). This time he'd stormed up.

But everyone was hungry.

The snag with the Portillon is that the col itself is a pretty scruffy affair in the forest with no views and definitely nowhere to eat. So I took the decision to carry on down with the group - Evelyn and Jennie couldn't get lost and I'd warned them I wouldn't wait. 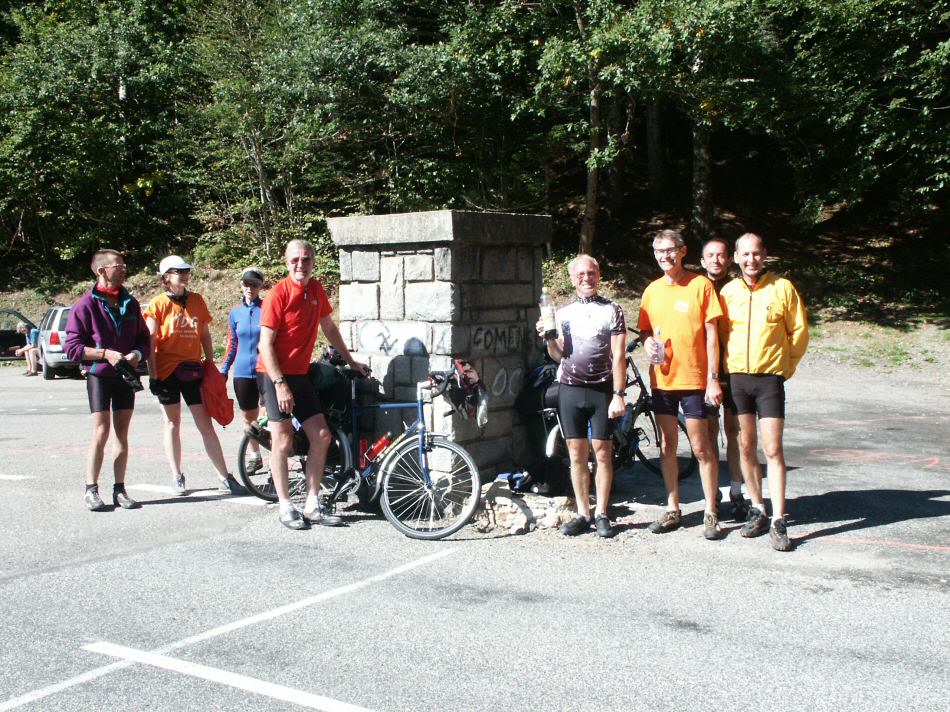 So we all helmeted up and put on windcheaters - it's amazing how cold you get - and set off down the incredibly steep mountainside. Speeds varied widely depending on temperament and experience, remember only half had done anything like this before. Though a col virgin William rides a motorbike and hurtled off like a maniac whooping with joy, Rob hates coming off cols and crawled down shouting "you're all flippin' mad!" - only he didn't say "flippin".

Within 15 minutes we'd covered the 10k into Bagnerres de Luchon. A lovely spa town with a wide main street lined with bars, we got together and I led the charge to some tables outside a big bar/brasserie and perused the menu. It quickly became apparent that the waiter was in a state of some excitement. It transpired that there had been a fractured water main the previous evening and that the workmen had just arrived and were going to cut his water off - at lunchtime! Poor guy, but as so often happens he weakened and said he'd get food to us before the tap was turned - and it was excellent:-)

30 minutes Evelyn and Jennie rolled in, hot and tired and were given the good news that they couldn't eat with us. But unlike the first three days out of the mountains my paranoia about food had disappeared. The reason is simple - pre-mountains so much can go wrong, but once in them it becomes simple. There's only one road so no-one can get lost. The climb takes a morning so once completed it's downhill to the food and at the foot of each col there's always a town big enough to have choice. It's hard to explain but from this day on many of my obsessions disappeared and I could actually relax and begin to enjoy myself...

So though a little disappointed they managed to drag their battered bodies across the road to a small creperie where they troughed everything in sight for the next 1 1/2 hours...

After wandering around the town I gathered the gang and set off to the campsite 1 km down the road. I'd chosen this one as I'd stayed in it 3 years ago, and besides being excellent it was right next to a supermarket, and after 5 days of restaurant food I fancied cooking in. Arriving at the site I was greeted by the very nice lady who amazingly remembered me from last time (a complement?) and charged us the lowest rental of the week (2e each). As the place was spotless, beautiful and had a large swimming pool the crazy pricing of French campsites continued to amaze me...

Everyone was on a high after conquering the first col, and Evelyn and Jennie had a new theory, that by eating as much as they possibly could all the time they'd have more energy for the climbs. This left me a little confused as that's what I though they had been doing, but having seen what they came back from the supermarket with I realised that they were taking it seriously... See Evelyn after lunch! 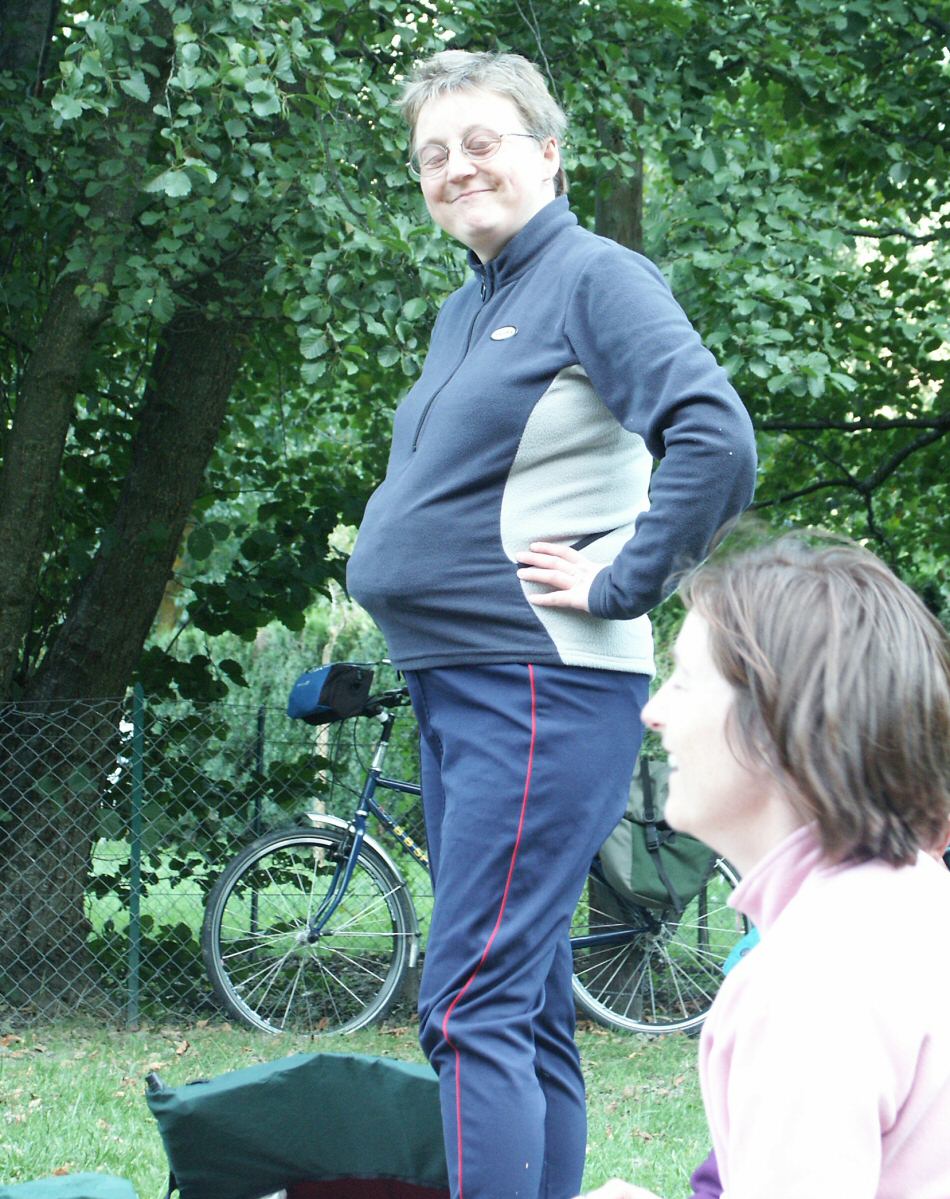 It's a fact that you simply can't overeat in the mountains - I guess we'd be burning an average of 5000 calories a day and for most people their digestive systems take a few days to get used to this sort of throughput. But once you've mastered the art of circular eating (like circular breathing but more disgusting) you do feel healthy, the throughput of food obviously containing shed-loads of vitamins and minerals even if you eat pizza every day. You also gain a quite staggering capacity for alcohol with no apparent ill-effects, though on a previous Pyrenees trip I'd overdone it and ended up falling-down drunk and had climbed the next days col practising circular groaning: